Bringing Dignity Back to Essential Work

As told to Corinne Segal

Almost overnight, most domestic workers lost their income, and because of the nature of the work, it wasn’t like people had savings or the ability to stock up on groceries or supplies or anything, so there really wasn’t a buffer. We do regular calls and meetings with workers and there was one worker meeting in mid-March where, it was a Zoom call, and one of the women held up her phone to the screen to show us that there was literally one cent left in her bank account.

On the more hopeful end, honestly, this is the first time talking about domestic workers as essential has been such an easy sell. I’ve been doing it for 25 years and it’s like, people are like, yeah actually, you’re right, for the first time. It’s kind of amazing. It feels like a really big opening because I do believe that once you see something you can’t unsee it. Once you see the value of what somebody brings to your life, your safety, your community, your economy, it’s hard to unsee that.

I do believe that at our core, as a country, that we are much more about care and connection and dignity and abundance than we are about scarcity.

There’s somehow a story about work that we believed, that we accepted, that allowed us to do that, to treat huge segments of our workforce as less than deserving of the ability to support their families doing this work. And now, I think we have a moment where we’re all taking a step back and seeing just how many people are powering our economy that we just never saw before, that we never valued appropriately, and who keep us safe but we haven’t kept them safe.

I think [the next step is] a public investment in care jobs becoming really good jobs. When you think about it, childcare and home care, long-term care jobs, direct care jobs are jobs that can’t be outsourced and they’re not going to be automated. There’s clearly a huge demand, especially with the growing older population in this country, and they have always been really crappy jobs that people can’t sustain. We end up losing some of our best caregivers to retail and fast food jobs because sometimes the wages are better. If we actually made childcare and direct care jobs living wage jobs, family-sustaining jobs, we could not only create a bunch of good jobs that we need, but these are job-enabling jobs. They make it possible for the rest of us to work and go out and get America back to work again.

The second would be to figure out a public program, maybe that we’re all contributing to and that we could all benefit from, that helps us afford childcare and long-term care and paid family leave. The government is spending a lot of money right now to help us through the crisis but I can’t think of a better investment in the working people who are going to get the country and the economy going again than helping them afford the care they need.

The story of this time is one that we have to fight for. The story I would like to tell to my grandchildren or whatever is that this was a horrible, devastating pandemic and we lost so much that it really taught us how to take care of each other and it helped us bring back the dignity of work and what it means to the fabric of this country.

It’s not inevitable that that’s the story. There’s another story, which is that we have less, we’re in a crisis and therefore we have to basically fight with each other over scarce resources, fewer jobs, less everything. So a kind of scarcity and zero-sum story. I think it’s gonna be a real fight to challenge that and to have the story be about care and connection and dignity. And I do believe that at our core, as a country, that we are much more about care and connection and dignity and abundance than we are about scarcity.

Ai-jen Poo is the director of the National Domestic Workers Alliance and the co-director of Caring Across Generations. Under her leadership, domestic workers won eight state Domestic Workers Bill of Rights and federal overtime and minimum wage protections for more than two million home care workers.

Anarchism's Lessons for
a Pandemic-Afflicted World 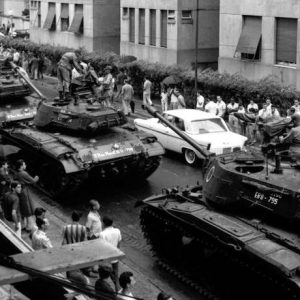 How US Interventions in Indonesia and Brazil Set the Stage for the Next 50 Years In May 1962, a young girl named Ing Giok Tan got on a rusty old boat in Jakarta, Indonesia. Her country, one of the largest...
© LitHub
Back to top