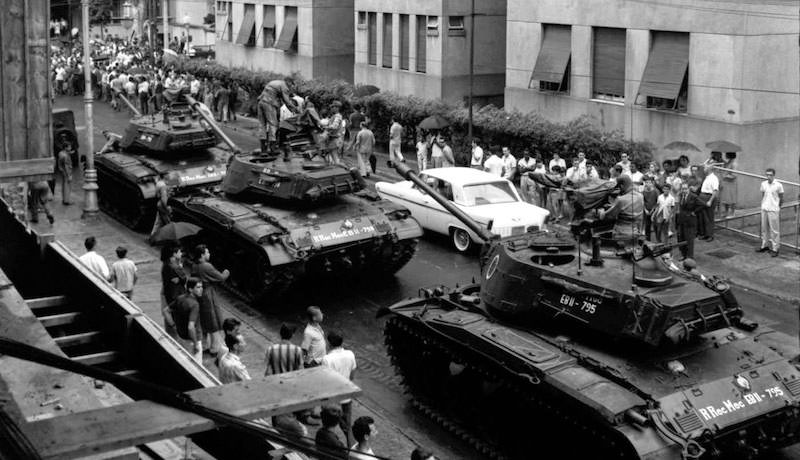 Vincent Bevins on the Dictatorships Born of the Cold War

In May 1962, a young girl named Ing Giok Tan got on a rusty old boat in Jakarta, Indonesia. Her country, one of the largest in the world, had been pulled into the global battle between capitalism and communism, and her parents decided to flee the terrible consequences that conflict had wrought for families like hers. They set sail for Brazil, having heard from other Indonesians who had already made the journey that this place offered freedom, opportunity, and respite from conflict. But they knew almost nothing about it. Brazil was just an idea for them, and it was very far away. Suffering through anxiety and seasickness for 45 days, they made their way past Singapore, across the Indian Ocean to Mauritius, down past Mozambique, around South Africa, and then all the way across the Atlantic to São Paulo, the largest city in South America.

If they thought they could escape the violence of the Cold War, they were tragically mistaken. Two years after they arrived, the military overthrew Brazil’s young democracy and established a violent dictatorship. After that, the new Indonesian immigrants in Brazil received messages from home describing the most shocking scenes imaginable, an explosion of violence so terrifying that even discussing what happened would make people break down, questioning their own sanity. But the reports were all true. In the wake of that apocalyptic slaughter in Indonesia, a young nation littered with mutilated bodies emerged as one of Washington’s most reliable allies, and then largely disappeared from history.

What happened in Brazil in 1964 and Indonesia in 1965 may have been the most important victories of the Cold War for the side that ultimately won—that is, the United States and the global economic system now in operation. As such, they are among the most important events in a process that has fundamentally shaped life for almost everyone. Both countries had been independent, standing somewhere in between the world’s capitalist and communist superpowers, but fell decisively into the US camp in the middle of the 1960s.

Officials in Washington and journalists in New York certainly understood how significant these events were at the time. They knew that Indonesia, now the world’s fourth most-populous country, was a far more important prize than Vietnam ever could have been. In just a few months, the US foreign policy establishment achieved there what it failed to get done in ten bloody years of war in Indochina.

And the dictatorship in Brazil, currently the world’s fifth most-populous country, played a crucial role in pushing the rest of South America into the pro-Washington, anticommunist group of nations. In both countries, the Soviet Union was barely involved.

There was an explosion of violence so terrifying that even discussing what happened would make people break down, questioning their own sanity.

Most shockingly, the two events led to the creation of a monstrous international network of extermination—that is, the systematic mass murder of civilians—across many more countries, which played a fundamental role in building the world we all live in today.

Unless you are Indonesian, or a specialist on the topic, most people know very little about Indonesia, and almost nothing about what happened in 1965-66 in that archipelago nation. Indonesia remains a huge gap in our collective general knowledge, even among people who do know a little about the Cuban Missile Crisis, or the Korean War, or Pol Pot, or can easily rattle off some basic facts about the world’s most-populous country (China), the second most-populous (India), or even numbers six and seven (Pakistan and Nigeria). Even among international journalists, few people know that Indonesia is the world’s largest Muslim-majority country, let alone that in 1965, it was home to the world’s largest Communist Party outside the Soviet Union and China.

The truth of the violence of 1965-66 remained hidden for decades. The dictatorship established in its wake told the world a lie, and survivors were imprisoned or too terrified to speak out. It is only as a result of the efforts of heroic Indonesian activists and dedicated scholars around the world that we can now tell the story. Documents recently declassified in Washington have been a huge help, though some of what happened still remains shrouded in mystery.

Indonesia likely fell off the proverbial map because the events of 1965-1966 were such a complete success for Washington. No US soldiers died, and no one at home was ever in danger. Although Indonesian leaders in the 1950s and 1960s had played a huge international role, after 1966 the country stopped rocking the boat entirely. I know from 13 years of working as a foreign correspondent and journalist that faraway countries that are stable and reliably pro-American do not make headlines. And personally, after going through the documentation  and spending a lot of time with the people who lived through these events, I came to form another, deeply unsettling theory as to why these episodes have been forgotten. I fear that the truth of what happened contradicts so forcefully our idea of what the Cold War was, of what it means to be an American, or how globalization has taken place, that it has simply been easier to ignore it.

This book is for those who have no special knowledge of Indonesia, or Brazil, or Chile or Guatemala or the Cold War, though I hope that my interviews, archival research, and global approach may have delivered some discoveries that may be interesting for the experts too. Most of all I hope this story can get to people who want to know how violence and the war against communism intimately shaped our lives today—whether you are sitting in Rio de Janeiro, Bali, New York, or Lagos.

Two events in my own life convinced me that the events of the mid-1960s are very much still with us. That their ghosts still haunt the world, so to speak.

In 2016, I was working my sixth and final year as Brazil correspondent for the Los Angeles Times, and I was walking the halls of Congress in Brasília. Lawmakers in the world’s third-largest democracy were preparing to vote on whether they would impeach President Dilma Rousseff, a former left-wing guerrilla and the country’s first female president. Down the corridor, I recognized an unimportant  but reliably outspoken far-right congressman by the name of Jair Bolsonaro, so I approached him for a quick interview. It was widely known by that point that political rivals were trying to bring President Rousseff down on a technicality, and that those organizing her ouster were guilty of far more corruption than she was.

Because I was a foreign journalist, I asked Bolsonaro if he worried the international community might doubt the legitimacy of the more conservative government that was set to replace her, given the questionable proceedings that day. The answers he gave me seemed so far outside the mainstream, such a complete resurrection of Cold War phantoms, that I didn’t even use the interview. He said, “The world will celebrate what we do today, because we are stopping Brazil from turning into another North Korea.”

This was absurd. Rousseff was a center-left leader whose government had been, if anything, too friendly with huge corporations.

A few moments later, Bolsonaro walked up to the microphone in the congressional chambers and made a declaration that shook the country. He dedicated his impeachment vote to Carlos Alberto Brilhante Ustra, the man who oversaw Rousseff ’s own torture as a colonel during Brazil’s dictatorship. It was an outrageous provocation, an attempt to rehabilitate the country’s anticommunist military regime and to become the national symbol of far-right opposition to everything.

When I interviewed Rousseff a few weeks later, as she waited for the final vote that would remove her from office, our conversation invariably turned to the role of the United States in Brazil’s affairs. Considering the many times and ways Washington had intervened to overthrow governments in South America, many of her supporters wondered if the CIA was behind this one, too. She denied it: it was the result of Brazil’s internal dynamics.

But that is, in its own way, even worse: Brazil’s dictatorship had transitioned to the type of democracy that could safely remove anyone—like Rousseff or Lula—whom the economic or political elites deemed a threat to their interests, and they could summon Cold War demons to go to battle for them when they pleased.

We now know the extent to which Bolsonaro’s gambit succeeded. When he was elected president two years later, I was in Rio. Fights immediately erupted in the streets. Big burly men started yelling at tattooed women who wore stickers supporting the rival candidate, screaming, “Communists! Get out! Communists! Get out!” 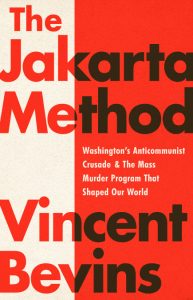 Excerpted from The Jakarta Method: Washington’s Anticommunist Crusade and the Mass Murder Program that Shaped Our World by Vincent Bevins. Copyright © 2020. Available from PublicAffairs, an imprint of Hachette Book Group, Inc.

Vincent Bevins is an award-winning journalist and correspondent. He covered Southeast Asia for the Washington Post, reporting from across the entire region and paying special attention to the legacy of the 1965 massacre in Indonesia. He previously served as the Brazil correspondent for the Los Angeles Times, also covering nearby parts of South America, and before that he worked for the Financial Times in London.

Bringing Dignity Back to Essential Work 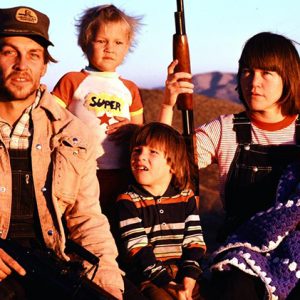 In vivid and riveting prose terror, Tara Westover describes a childhood both harrowing and loving in her book, Educated....
© LitHub
Back to top
Loading Comments...