Bill McKibben: How to Fix Unemployment While Fighting the Climate Crisis

On Coronavirus and the Massive Jobs Program that Could Mobilize America

As told to Corinne Segal

I’ve spent 30 years now, since I wrote the first book on climate change, thinking about crisis, and so it strikes me that there are lots of lessons that come out of this moment we’re in. None of them are silver linings, there aren’t silver linings to something this painful and dramatic, but if you’re gonna go through it you might as well learn something, and so I hope that we are.

It seems to me that they fall into three broad categories. The first is simply that the real world is a thing. It doesn’t matter how many screens you have or how editable everything seems. Physics and chemistry, as I’ve been saying for decades, don’t compromise or negotiate, and neither does biology, as the pandemic reminds us. It does not matter that our leader stands at his lectern and lectures the microbe and tells it that it’s a hoax or that it must disappear by Easter or whatever he’s insisting. The microbe just does what it wants to do. That’s the nature of microbes, and it’s setting the rules here. If it says you’ve gotta stand six feet apart, well, you’ve gotta stand six feet apart. So that basic reminder—and we’re really the first generations in human history to have the luxury of forgetting that reality is real—the reminder that we’ve been wrong, is probably useful.

If we came out of this pandemic a little stronger in that sense of solidarity with each other, that would be a good thing.

There’s a corollary to that, which is: speed really matters. I think the thing we’re gonna look back on with most chagrin about the coronavirus thing is… we knew about it. The US and South Korea got their first cases on the same day in January. It was like what they call a natural experiment. South Korea’s system seems to have risen to the occasion. They’ve disrupted things. No big gatherings. Everyone gets tested a lot. And so, you know, it’s not like they’ve solved the problem, they still have some cases, but they’re basically looking at it through the rearview mirror. Whereas we wasted all of February watching our leader engage in the kind of silly games for which he’s noted. And, hence, we ended up way behind the curve, as we now say, and now we have to not only disrupt the hell out of everything, but even when we do it we end up with a large pile of dead bodies. It’s horrible.

The analogy to the larger climate crisis couldn’t be clearer. We had our warning 30 years ago. We were told by every scientist who mattered that it was time to start flattening the carbon curve, and we didn’t do it. We just kept right on doing what we were doing. We emitted more CO2 since 1990 than in all of human history. So now we’re in a place where we still have to move fast, but it’s going to be disruptive, and even as we do it right, there’s still gonna be tons and tons of damage, we’re too far down that curve. So speed really is essential.

The third thing that keeps really bringing itself home to me is, this should be a reminder that social solidarity truly matters. I’ve spent most of my life living in the political shadow of Ronald Reagan and the notion that markets would solve all problems and that our job was to pursue our self-interest.

I said to someone the other day, I was kind of remembering that Reagan’s main laugh line was, “The nine scariest words in the English language are, ‘I’m from the government and I’m here to help.’” But those aren’t. The scariest words are “Sorry, no more ventilators,” or “The hill behind your house is on fire now.” And those are not things that yield to those kind of solutions, to everybody just doing their own thing. Those require joint action. If we came out of this pandemic a little stronger in that sense of solidarity with each other, that would be a good thing.

There’re two ways that things could [go] in our big cities in the next three or four months. My guess is, most people are not gonna be super eager to jump back on the subway all the time, because the subway’s kind of a scary place now, at least for a little while. So one option is, everybody could try to drive everywhere they need to go … or we could do what some cities are now starting to do, which is say, you know, that makes no sense. Let’s really redesign things. London is shutting down basically all of the city’s main central city streets. They’re not gonna be open for cars anymore, just bikes and buses and pedestrians. If that happens, if it works, it’s quite possible that it’ll create a slightly different kind of Londoner in the process: a little more gregarious and social and connected to each other.

We really are starting to understand that if you ignore reality long enough, it doesn’t mean reality will ignore you.

On a macro level, our big problem, coming out of the pandemic, is going to be that there are going to be tens of millions of people without work around the world. And if you start thinking about what jobs are required in the next few years that could sop up that kind of labor, the only real answer, I think, is the very difficult but doable task of converting our energy system from fossil fuel to something else. So the test of our social solidarity will be whether or not we really adopt something like a Green New Deal and come together to do work that clearly has to be done.

We were already moving sharply in the right direction in the year or two leading up to this. The movement-building work that some of us have been doing for a long time had clearly taken a quantum leap and we were seeing things like the Green New Deal or the amazing climate strikers, Greta Thunberg and the 10,000 other Gretas that are all over the planet, young people doing fantastic work. To some degree, that kind of organizing has been arrested by the pandemic. No one can go out in the street and do anything. But on the other hand, I do think that people’s attention, people’s ability to understand that tragedy can be awaiting us, is heightened now. We really are starting to understand that if you ignore reality long enough, it doesn’t mean reality will ignore you. It means that eventually it will bite you in the rear end, and pretty hard.

So I’m never optimistic, but I’m willing to believe that we may come out of this in a slightly different way. It’s also possible that it’ll just reinforce all our polarizations and divisions and fantastical magical thinking and conspiracy theorizing and all the other things that keep us from behaving the ways that we must. So who knows—but I am impressed with how many people have quietly done what needed doing, over these past months.

Bill McKibben is a former New Yorker staff writer and the founder of the grassroots climate campaign 350.org. He is the Schumann Distinguished Scholar in environmental studies at Middlebury College. 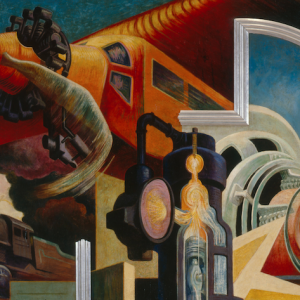 Noam Chomsky: What History Shows Us About Responding to Coronavirus Scholar Noam Chomsky says that the greatest impact in politics comes from "your constant, day-to-day activist work, the kind...
© LitHub
Back to top