Bouchercon 2016—crime fiction’s big, roving annual bash—has come and gone, and we asked attendees to this year’s conference in New Orleans (lucky) for their best memory of the weekend’s festivities.

My favorite memory from this Bouchercon was attending the Anthony Awards ceremony, where two of our authors were nominated for the Anthony for Best First Novel: Rob Hart for New Yorked and Patricia Abbott for Concrete Angel. I was absolutely thrilled for Rob and Patti. But on both a personal and professional level (since my work with Polis intertwines them), this was the first year that Polis titles were even eligible for the Anthony Awards, so to have two of the five nominees for Best First Novel was truly special. And it proves that there’s plenty of room in the industry for independent publishers, and that we can and do publish books that are just as good as anything in the field.

Tom Pitts and I hosted an Authors on the Air podcast/interview in my hotel room with Brian Panowich, Josh Stallings, Eric Beetner and Jordan Harper that got a little out of hand.

The highlight of this year’s Bouchercon, for me, was watching Laura Lippman completely dominate the “Just a Minute” panel, a recreation of the BBC Radio game show. Laura, playing against three residents of the UK who were presumably more familiar with the game, won it going away. She inspired every woman who ever, in childhood, heard a suggestion that it might be nice if she let someone else win once in a while . . . John Connolly did his usual masterful job as MC. At Saturday night‘s auction, a woman saw him and said to me (who sat on the panel as scorekeeper and nominal moderator), “Did you see his panel on Friday? He was so funny . . . ” I could only agree, and be even more grateful about Laura’s blow for the sisterhood.

The LGBTQ panel was the best panel I have heard in eight years of attending Bouchercon. The panelists were knowledgeable, the moderator asked the “right” questions, and the audience was fully engaged throughout. It brought tears to my eyes to see this topic once again addressed on the main Bcon panel schedule. Oh, and yes, there was a hell of a lot of laughter in that room as well. I also want to say that the Lifetime Achievement Award interview of David Morrell by Lee Child was near perfect. Lee didn’t have to do much since David can talk for hours—and so inspiringly. I will think of moments as either/or moments from now on after this wonderful interview.

The panel I was on, about writing bad guys, was amazing and not at all because of me. First, I loved the fact that the panel was about writing bad guys but three of the five panelists were women and the moderator was a woman. This made for some awesome and insightful answers and a great conversation about what makes a really great villain. I probably would have been better off sitting in the audience listening than trying to justify my existence up there with a comment.

Harper Collins organized a secret surprise panel that was moderated by Lee Child entitled Women Taking Shots. The panelists were all female and included Karin Slaughter, Lisa Unger, Sara Blaedel, Alafair Burke, and Kate White. Many writers attended. I was there with Julia Dahl and Lara McHugh. It was a very interesting discussion on the differences between male and female crime writers, their fans, their sense of the industry’s future, and the differences in male and female readers. Panelists spoke at length about how male readers have a tendency to avoid books featuring female protagonists and/or written by female authors.

As if to underline this point I was later approached by Mystery Mike aka Michael C. Dillman in the book room where he was helping one of the sellers there. He wanted me to sign a whole pile of books. He’d bought my third one, Walleye Junction, by accident it seems. Not noticing it was a female writer he’d been attracted to the word “walleye” in the title and thought it would be about fishing. Well, he read it anyway and was genuinely surprised by how much he loved it. He even said I wrote male characters incredibly well. He then proceeded to read and love Bone Dust White and Burnt River. Hence the seven copies I had to sign. So I have an accidental fan. Have I stumbled upon a genius marketing trick by accident? If we want more male readers we’re simply going to have make them think our books are about fishing. 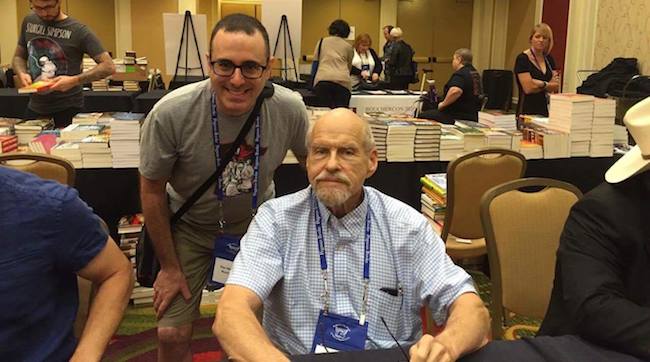 Seeing so many friends is why I go, but this year, my fifth, I truly felt like part of the crime fiction family. I moderated a panel and served on another, and of course, the Anthony Award nomination for best anthology, Protectors 2: Heroes was great. But one moment? It was at the awards, when Chris Holm won best novel and gave his speech. Our first Bouchercon was 2011, we came up together—though he’s been writing longer—and seeing him hit it big felt great. Kind of like John Cusack? He’s my age, so whenever he has a big movie I feel like my generation isn’t a walking disaster. 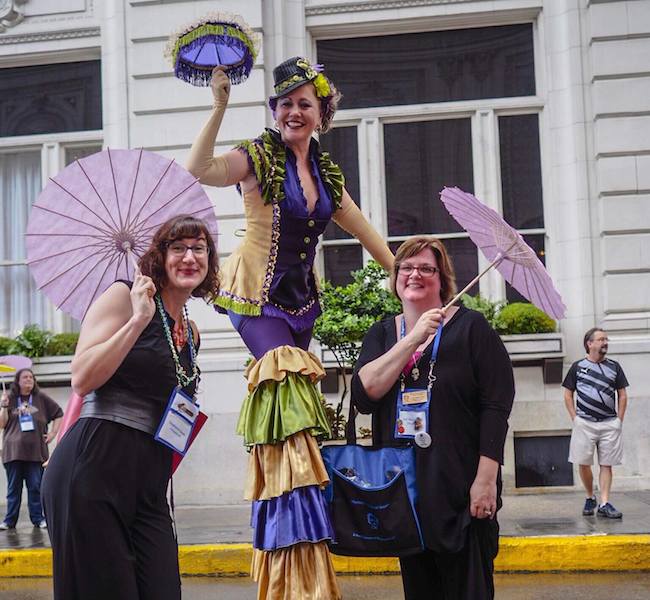 My favorite Bcon moment was the Second Line Parade, dancing along in the rain with Sara Paretsky and Stephanie Gayle. Here are photos, but I don’t know who took them… 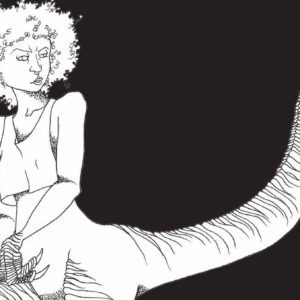