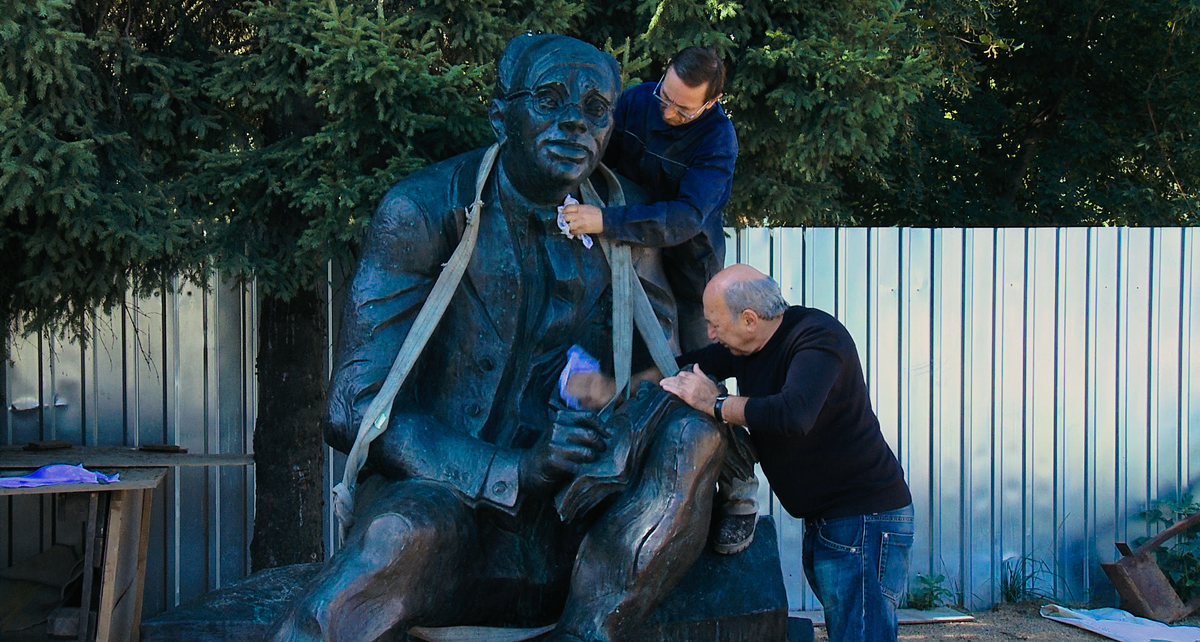 Get an Exclusive Look at David Novack's film Finding Babel

The new documentary film Finding Babel follows a journey undertaken by Isaac Babel’s grandson to come closer to some sense of truth on the 75th anniversary of Babel’s execution. Director David Novack worked closely with New School Professor Val Vinokur (The Essential Fictions of Isaac Babel, Northwestern University Press, 2017) to make sure the English translations of Isaac Babel’s work that appear in the film were contemporary and fresh. Together, they worked through the original Russian alongside older English translations to bring Babel’s voice to the screen, with the aid of Liev Schreiber’s voiceover. The clip below is an exclusive look at one of those translations. What follows is a brief correspondence about Babel, the art of translation, and why Babel’s writing resonates with readers today.

David Novack: Why do we need a new translation of Babel in English?

Val Vinokur: Most of my colleagues who teach Babel have, like me, been using an out-of-print translation of his stories by Walter Morison, an edition that had many problems but was still considered to be a more artful English rendering than the two editions still in print (by David McDuff and Peter Constantine). Beyond that, the “need” for any new translation simply arises out of the sudden combination of the will and the opportunity to translate something, and that’s what happened two years ago. But the only people who can determine whether my work was really needed are you, my readers. The translation of any work, as Octavio Paz once intimated, actually begins within the original language itself. There is no authoritative, final version of Babel’s stories, after all. A new English translation merely continues that work.

DN: How do you feel about hearing your translations in the context of a film and read by Liev Schreiber?

VV: That was a trip. I’m a big believer in reciting literary works; I used to feel bad about reading out loud when I teach, until my students told me how it completely reoriented and cemented their connection to the text. And a great actor like Liev Schreiber will always offer a radically fresh, defamiliarizing interpretation of a great work of literature. The film was edited during the early stages of my own work, so the first stories I finished were those that you needed for what would become the voiceover. You were incredibly encouraging, and we had some lively back and forth with Andrei Malaev-Babel and Grisha Freidin about those drafts—some of which had to be changed if only to accommodate the demands of an edited voiceover, and some of which I incorporated into my own translation. When I heard Liev Schreiber’s reading, I again ended up using some of the variations in my final draft.

DN: What are some of the challenges and joys of doing a translation of Babel? Are there any particularly interesting phrases you recall toying with?

VV: In his story “Guy de Maupassant,” Babel’s narrator describes his approach to editing his patron’s leaden translation of the French master: “A phrase is born into the world both good and bad at the same time. The secret lies in a barely discernible twist. The lever should rest in your hand, getting warm. You must turn it once, but not twice.” I like to think there are a few such turns in my own translation. I will give one example. In “The Ivan & Marya,” from the deck of the river steamer that gives the story its name, a provincial singer named Seletsky lets loose a medley of classical and popular song that had a bit of everything, including “Blokha Mussorgskogo, khokhot Mefistofelya”—literally and usually translated as “Mussorgsky’s Flea, Mephistopheles’ (booming) laughter.” Here, struck by the resonance between blokha and khokhot, I turned the lever once and arrived at: “Mussorgsky’s Flea, Mephistopheles’s glee.” In fact, I probably turned the lever more than once, just as Babel probably turned the lever more than once, revising and pruning his stories, changing (and/or censoring) many of them in later editions. Perhaps the key is to make many turns look like one decisive twist.

DN: Are there any places you feel simply cannot be translated and, if so, what kind of decisions must you make to accommodate?

VV: I don’t know if I succeeded in translating everything that had not yet been adequately translated in Babel’s fiction. It would be strange if I had. But that doesn’t mean it’s untranslatable. Having said that, as a practical matter, I have often included annotations that comment on how I arrived at a certain translation, sometimes with counter-translations. But as a translator, whenever I encounter something that seems untranslatable, that’s when I get excited, that’s when I spark arguments between other Russian specialists on Facebook and by email. Elliot Weinberger called translators the “geeks of literature.” If you don’t enjoy geeking out on that kind of stuff—and, yes, getting annoyed at geeking out about it—then you probably shouldn’t translate.

DN: In your on-camera interview, you spoke at length about Babel and the concept of identity. It pains me that I couldn’t put it in the film. Can you elaborate on Babel’s identity and go on to explain how this idea of identity is relevant to readers, particularly at the college level where you teach Babel to young readers?

VV: Babel gives us a subtle way to think about what identity means beyond the clichés of cultural politics. It offers readers—young readers in particular—an opportunity to see how this narrator, this alter-ego that Babel shaped, was dealing with utterly irreconcilable identities that resulted out of a collision of different historical circumstances 100 ago, but a collision that still reverberates today, rhyming if not repeating.

Babel was a Jewish writer who chose to write in Russian (and not Yiddish or Hebrew, as some of his peers did) and thereby become a Russian writer. But he was an Odessa Jew, which is sort an outlier in terms of what we think of as Jewish identity in Eastern Europe. Odessa was in its own way a center of the Jewish enlightenment; it was also, at least in legend, a center of Jewish criminality, of Jewish muscularity, of Zionism, and of course commerce. But a lot of these elements are not necessarily ones that we think of when we have an image of the sort of classic Eastern European Jew who is precisely not muscular, who is not criminal, who just sits at home and studies. That’s not the image of the Jew that we get from Odessa, even though Babel himself did not spend all that much time in Odessa. He largely grew up outside Odessa in a very comfortable, cosseted, stuffy environment, a womb-world where he just had to study and eat lots of treats and cakes that his grandmother was feeding him in a constant stream. But that’s not his trajectory in life, neither does it explain why somebody like that would go to St. Petersburg, and then volunteer in the Red Cavalry. I’m always struck by the extent to which Babel doubles down on stereotypes and clichés in his fiction. He’s so free and unapologetic with them, and there are so many of them and they’re all glommed together, that they almost begin to undo each other. This is his brand of modernism, where he acknowledges that all of us carry our own caricatures with us, and that even though we all see ourselves as this very complex, ineffable person, I know to a certain extent that other people will also see a caricature of me. Babel’s strategy to address that is to double down on these caricatures until suddenly they just break and begin to distort themselves, like certain kinds of modern paintings, where you use very schematic elements but suddenly you’re seeing through them, you’re seeing something deeper, more complex.

I think that the culture at large still thinks in rather stupid ways about identity, too schematically—either in a dualistic way, or else in a kind of naïve, hybridized fashion, as if we can all just kind of blend and be funky. Babel addresses both of those positions and makes both of these positions much more complicated and fluid. I think that’s why each fresh wave of students that’s introduced to Babel is shocked by it. They’ve never read anything like it in their lives. They’re thrown off balance, and then eventually they become obsessed with Babel—just like I did when I first read him in a windowless mailroom of a Downtown Miami law firm where I worked summers as a 16-year-old clerk.

Most of the students that I teach at The New School are writers or artists, so we read Babel as a kind of poetics, as meta-fiction, because he is often writing about how and why one writes. What is the most meaningful kind of art? What is it supposed to do? What is the place of the purely aesthetic and the purely ethical in art, how do they connect, what is the place of truth, what is the role of not just fiction but of lies? All the questions that artists constantly deal with can be encountered in this incredibly witty, poignant, accessible, concentrated form. His stories are inexhaustible in that you could take one simple motif like the moon, for instance, and follow it through one story, through several stories, and it will give you a complete reading, another secret that you’ve unlocked about the text, and that’s an amazing feeling for my students and for me as a teacher. So I’m constantly learning from the kind of work that my students do on Babel. After all, the main reason I end up teaching a lot of the texts that I teach is that they afford me opportunities to learn something about these texts from my students. If I’m not learning anything then I get bored.

Finding Babel opens in NYC and Greensboro, NC on October 28. Theatrical engagements will follow in Los Angeles and Williamsburg, VA in December. For more info on future screenings, head to FindingBabel.com or facebook.com/FindingBabelDoc.

DAVID NOVACK is the director, and a writer/producer of Finding Babel (Winner, Special Jury Prize, Moscow Jewish Film Festival). Prior to his work with Finding Babel, Mr. Novack wrote, produced and directed the film Burning the Future: Coal in America, which won awards at numerous festivals in the US and Europe including the prestigious IDA Pare Lorentz award for social documentary filmmaking. Mr. Novack also produced Kimjongilia, a documentary about N. Korean refugees that premiered at the 2009 Sundance Film Festival and won the 2010 best human rights documentary award from the One World Brussels Film Fest of the Human Rights and Democracy Network. In additional to making films, Mr. Novack is a Professor of Film at the University of Pennsylvania’s School of Design where he enjoys mentoring a new generation of filmmakers.
http://www.findingbabel.com/

There Are 1,462 Possible Plots for Your Book 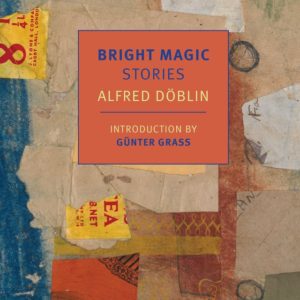 THE ERUPTION OF MT. VESUVIUS One day, a man living in the city of Minsk in Poland, little concerned with the wider world,...
© LitHub
Back to top