There Are 1,462 Possible Plots for Your Book

From William Wallace Cook’s Plotto: The Master Book of All Plots

In the 1920s, dime store novelist William Wallace Cook painstakingly diagrammed and cataloged his personal writing method—“Purpose, opposed by Obstacle, yields Conflict”—for the instruction and illumination of his fellow authors. His efforts resulted in 1,462 plot scenarios and Plotto: The Master Book of All Plots was born. A how-to manual for plot, Plotto offers endless amalgamations to inspire limitless narratives. Equal parts reference guide and historical oddity, Plotto is sure to amaze and delight writers for another century.

{A} finds himself with a strange baby, {CH}, on his hands.

{A}, annoyed by a certain object, {X}, destroys it, but mysteriously it reappears; again and again, {A} destroys {X}, but it always reappears.

{B}’s profession is a hazardous one—aviator, automobile racing driver, steeple jack, “human fly”—and {A} considers this fact an obstacle to their marriage.

{B}, married to {A}, is haunted by memories of a former sweetheart.

{A}, through befriending a needy stranger, becomes involved in an unpleasant complication.

{B}, unless she reveals a personal delinquency, will cause an innocent man, {A}, to suffer for transgression.

{B} receives, in a mysterious manner, a photograph, not of herself but of someone greatly resembling her.

{A} receives half of an important message, {X}, and is looking for a stranger who has the other half.

{B} desires a place of seclusion where she can be absolutely alone, away from cables, wireless, mails, and the public.

{A}, falling ill in a wilderness country, is attended by an old woman, {B}, to whom years before he had taught a fake method of healing.

{B}, without food or water, is adrift in a small boat at sea.

{A}, of an inordinately romantic temperament, sees the hand of {B}; and, because of the hand’s shapeliness and beauty, falls in love with the owner, {B}.

{B}, a somnambulist, deceives herself in a certain enterprise by opposing, in an unconscious state, all the efforts of her waking moments.

{B} is ambitious to “get ahead,” to advance herself in her chosen line of work; but she has difficulties that are disheartening.

{A}, a highwayman, is robbing the mails.

To celebrate the new edition of Plotto, Tin House is running a five-week flash fiction contest inspired by plots from the book. To enter, see details here.

From Plotto: The Master Book of All Plots. Used with permission of Tin House Books. Copyright 2016 by William Wallace Cook. 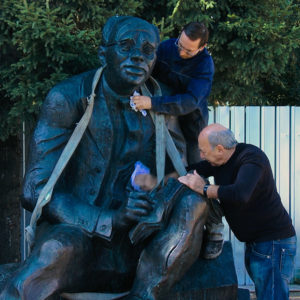 The new documentary film Finding Babel follows a journey undertaken by Isaac Babel's grandson to come closer to some sense...
© LitHub
Back to top
Loading Comments...