"The blizzard doesn't last forever; it just seems so."

It’s a new year. Perhaps you’ve made some writing (or submitting) resolutions? If you’re aiming for 100 rejections this year, or if you’ve been tracking rejections for sixty years already, or if you’re simply trying to get that novel or story or poem done and off to your agent or editor, you might need a little extra encouragement by now.

First of all, don’t forget: all great writers (and many of their now-beloved books) have been rejected, some of them many, many times. But you don’t need a pep talk from me. Take it from a few of those writers themselves, who after all should know:

Perhaps because of my long history as a dancer, actress and writer, rejection is something with which I am all too familiar. . . for every accomplishment there were twenty rejections. A dance company thought my style was incompatible with theirs. A casting director found me lacking. An editor considered my writing too fanciful, or too plain, too abstract or too concrete. I could go on for hours. In the end, though, only one attitude enabled me to move ahead. That attitude said, ‘Rejection can simply mean redirection.’

–Maya Angelou, as told to Tavis Smiley and recorded in TIME, 2015

[S]tarting when I was fifteen I began to send short stories to magazines like Esquire, and they, very promptly, sent them back two days before they got them! I have several walls in several rooms of my house covered with the snowstorm of rejections, but they didn’t realize what a strong person I was; I persevered and wrote a thousand more dreadful short stories, which were rejected in turn. Then, during the late forties, I actually began to sell short stories and accomplished some sort of deliverance from snowstorms in my fourth decade. But even today, my latest books of short stories contain at least seven stories that were rejected by every magazine in the United States and also in Sweden! So, dear Snoopy, take heart from this. The blizzard doesn’t last forever; it just seems so.

–Ray Bradbury, in Snoopy’s Guide to the Writing Life

I discovered that rejections are not altogether a bad thing. They teach a writer to rely on his own judgement and to say in his heart of hearts, ‘To hell with you.’

It’s all about your determination, I think, as much as anything. There are a lot of people with talent, but it’s that determination. I mean, you know, I would cry when the rejections came in—the first couple of times, anyway—and I would go to sleep feeling down, but I would wake up in the morning optimistic and saying, ‘Well, maybe they didn’t like that one, but wait till they see what I’m going to do next.’ And I think you just have to keep going. . . .

You know what? The thing is that nobody writes unless they have to. So if you have to write because it’s inside you, then you will.

–Judy Blume, in a 2011 interview with Neal Conan

Winning or losing an argument, receiving an acceptance or rejection, is no proof of the validity or value of personal identity. One may be wrong, mistaken, or a poor craftsman, or just ignorant—but this is no indication of the true worth of one’s total human identity: past, present & future!

–Sylvia Plath, in The Unabridged Journals, 1956

When I was older, I decided that getting a rejection slip was like being told your child was ugly. You got mad and didn’t believe a word of it. Besides, look at all the really ugly literary children out there in the world being published and doing fine!

My books are not nearly as controversial as many, and you can’t please everybody. A writer has to develop a hide like a rhino. If we allow ourselves to get upset every time a book is challenged we’d all be basket cases. . . .

I’ve had rejected manuscripts, yellowing in the bottom drawer of my desk for years, which I’ve then brought out, resubmitted to the very same publishers, and had snatched up, because they fell into a currently popular niche in the market that hadn’t existed when I previously submitted them.

–Lois Duncan, in a 2011 interview with Megan Abbott

I think being rejected can be very beneficial, especially if the work really isn’t good. If it gets published, you are almost certain to find yourself looking back with great embarrassment!

When a magazine rejects your story or poem, it doesn’t mean it wasn’t “good” enough. It means that magazine thought its particular readers didn’t need that exact story or poem. Editors think of readers: what’s in it for the reader? There is a cult of celebrity, too, in this country, and many magazines publish only famous people, and reject better work by unknown people.

[When I was a reader for The Paris Review,] I learned how many writers there were out there, and it was terrifying! But I also learned not to take the process too seriously. I figured that if I, a nobody in an un-airconditioned East Village apartment (batches of manuscripts were sent to me there), had the power to reject the slush pile, I couldn’t worry too much when my own stuff was rejected. It may have made me more resilient . . . and it definitely spurred me to submit to lots and lots of places at once, and not be so precious about it.

–Jennifer Egan, in a 2010 interview with Christopher Cox

–Aja Gabel, in “The World is Full of Rejections: Find the One That’s Right For You“

You have to let go of what your ego wants and understand what you’re looking for, the readers who understand you and get excited about the work. That’s where any momentum for a career comes from: finding those people. And you end up with something, a lot of times, that’s better than what you set for yourself as a dream. I think one of the major things that can happen, if you stay in it long enough, is you start to see how small your dreams were.

I was rejected many times in Poland and later in this country. Some of my very best stories were turned down again and again. . . . One good thing about rejection is that it tells me I am still active, still writing. If I stopped working, I wouldn’t get rejected anymore. But would that be good? Also, I see rejection as proof that my work is being judged for its quality and not simply because I have a name.

–Isaac Bashevis Singer, as told to The New York Times in 1985

It does help, to be a writer, to have the sort of crazed ego that doesn’t allow for failure. The best reaction to a rejection slip is a sort of wild-eyed madness, an evil grin, and sitting yourself in front of the keyboard muttering “Okay, you bastards. Try rejecting this!” and then writing something so unbelievably brilliant that all other writers will disembowel themselves with their pens upon reading it, because there’s nothing left to write. Because the rejection slips will arrive. And, if the books are published, then you can pretty much guarantee that bad reviews will be as well. And you’ll need to learn how to shrug and keep going. Or you stop, and get a real job.

You must keep sending work out; you must never let a manuscript do nothing but eat its head off in a drawer. You send that work out again and again, while you’re working on another one. If you have talent, you will receive some measure of success—but only if you persist.

Could we start reframing rejection as something necessary, even desirable—not shameful, but an important step on the artistic journey? Rejection doesn’t automatically mean falling short; it can mean that risks are being taken, that you’re innovating. At the very least, it means that you’re trying. We need to be transparent about the work, about how 99% of the time it’s a thick skin that does more for artists than bolt-from-the-blue talent. And also about the toll it can take on you.

For years I didn’t talk about my own rejection, putting up the front that every aspiring writer does. But I was steadily getting rejected from every creative writing MFA (master of fine arts) I applied to, and then by dozens of agents. When I did get an agent, it was time for my first book (still unpublished) to be rejected unanimously by publishers, then rejected again by even more publishers a while later. When my next novel went on submission I spent a lot of time having panic attacks in office toilets—until a first offer, miraculously, came through. This kind of trajectory is normal. It’s often much worse. I just didn’t know. . . .

When I’m asked now if my first novel—my real first novel, sort of—might be published, I say no. I can see how it was still the work of someone finding their way. Those rejections gave me resilience. They were what I needed to allow me to write something better, still encourage me to write something better. With accepting rejection we find the space to do that. We realize that most others in the arts are in the same place. And maybe we’d be a little kinder and patient with ourselves and others, knowing this.

–Sophie Mackintosh, writing in The Guardian in 2019

When you get rejected by a publisher, you have not failed. You have actually passed another milestone. This is a really, really hard business to be in. You need a support network. Try and find a workshop. You don’t want to go this alone.

–N.K. Jemisin, in her Master Class

Rejection is an enormous part of a writer’s life. It’s just the way it is. There are so many people out there wanting to show and sell their work. It’s easy to get lost and very difficult to get attention. As you would expect, I found it very discouraging, but I was also prepared for it because I knew writers. I knew what the life was like, and I knew that the only thing that you could do, if you really wanted to do this, if you really wanted this life, you had to accept that it came with a certain amount of rejection. And if you kept at it, that could change. Your other option was to quit and say, I can’t take all this rejection.

Starting with a small press was the best thing that happened to me, and I do not doubt I will publish with similar places at different points in the future. Being at a place like FSG, or publishing in The Paris Review, is also wonderful. These are relatively new developments. I spent a good deal of time being rejected by everybody everywhere. Still do. The bullshit never ends. That’s the main thing to remember. It never ends. The assholes are stronger in most ways. So you have to ignore them and just write and let that be the meaning of it all. If you publish at a small place or a large one, great. If you make some dough at, without messing with your work in ways that make you uneasy, great. But the meaning of it all is whatever happened when you were writing, and then the power of what you made. Those are the things that matter.

–Sam Lipsyte, in a 2010 interview with Giancarlo DiTrapano

Don’t self-reject. You know what I mean. 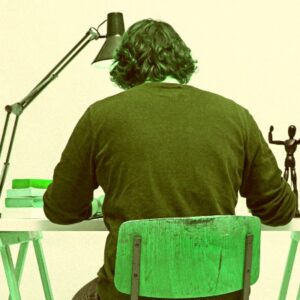 I never wanted to write autofiction or anything based on my “lived experience.” I especially did not want to write a book...
© LitHub
Back to top