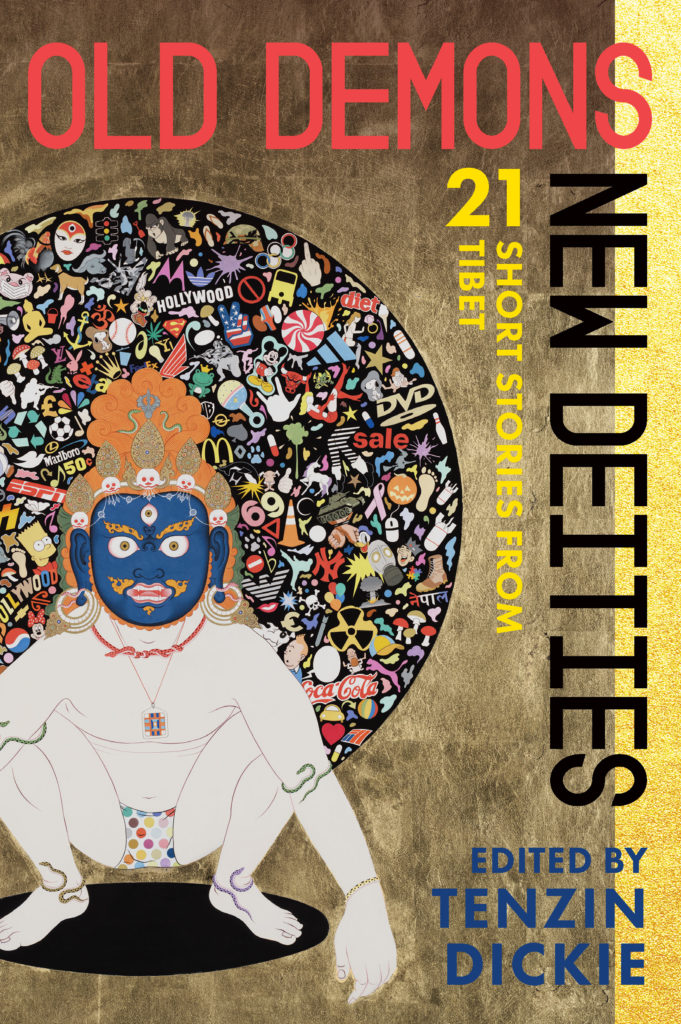 The following is from the anthology, Old Demons, New Deities. The first English-language anthology of contemporary Tibetan fiction available in the West bringing together the best Tibetan writers from both Tibet and the diaspora. Tenzin Tsundue, poet, writer and activist, is one of the major Tibetan writers writing in English today. He won the Picador-Outlook Prize for Nonfiction in 2001.

Zumki stops her dad in the middle of the bustling New York street and insists that he tells her the snow lion story again. Her big pleading eyes narrow in anticipation. Her father looks to either side of the road and marches on, leading Zumki with his index ﬁnger.

Then Tashi, her father, makes a suggestion. “Can’t we do this at home?”

“At home we have Snow Lion on TV!” Zumki yells amidst the din of traﬃc.

Tashi obliges, knowing how persistent his daughter can be. He begins: “Up in the highest mountains, among the white, white mountains of the Himalayas, live the snow lions. It is believed that only the kindest and purest of heart can see the snow lion. The only thing is, its head alone is the size of you!” Tashi pinches the cheeks of his little daughter who is now ecstatic with joy, her small hands clapping in excitement as she squeals with laughter.

“While its thick white coat keeps the snow lion warm in the snow mountains, a mane of bright green hair runs along its monstrous head, down its back and down its arms and legs,” explains Tashi. “No one knows what snow lions eat but they have enormous mouths.” Saying this, Tashi animatedly bares his teeth, opening his eyes wide. In a sudden swinging gesture he picks up his little girl, mounting her onto his shoulders. Then they sing and dance. “Tingti…tingti…ting, tingti…tingti…tingti, tiriti ti…tiri tiri ti…” Father and daughter are now doing the snow lion dance in the bustle of a street in the biggest city in the world.

Back at home, Zumki neatly seats herself on a square mattress on the ﬂoor right in front of the television set. Her father dutifully switches on the machine, showing a video recording of a snow lion dance performed by a Tibetan dance troop in India. Zumki dances, waving her little hands and swinging her ponytail.

When the father returns to check on Zumki, the little angel is fast asleep in front of the snow lion. Tashi lifts her up in his arms and lays her down in her bedroom. To the sleeping child he whispers, “When we go to India, we’ll see real snow lion dances. Good night, my motherless baby.” He switches oﬀ the lights and closes the door.

Zumki and her father are now in Dharamshala, India, to spend their summer break with Zumki’s grandparents. Looking down from their street-side house on a ﬁrst ﬂoor in McLeod Ganj, Zumki looks out for Lhasa apsos.

“Tomorrow we are going trekking to Triund mountaintop. Zumki, do you want to come? We will sleep in tents and make our own food among the trekkers,” Tashi says.

Zumki thinks for a while and asks: “Are there snow lions up in the mountains?” Tashi looks at his parents and responds, “I don’t know. We’ll go and ﬁnd out.”

The next morning, straining with small steps up the steep slope, a line of trekkers follows its way up the ridge, huﬃng and puﬃng. As the sun rises in the golden light of dawn, Zumki is leading her father by a few steps. She crawls on her tiny hands and knees, climbing the large stone slabs that become the steps up the slope. Her father looks on.

After a curve in the road, Zumki’s father ﬁnds her sitting on a rock feeding some of her Uncle Chips to a monkey. In a sudden reﬂex, Tashi rushes forward to chase the monkey away. Zumki is perplexed. “Zumki, what are you doing? These monkeys could bite you. Aren’t you scared?” Tashi shouts at her, bending down on his knees and hugging his child.
“But, I am not scared of monkeys,” she says. “I love them.”

After walking for some distance, they all take a rest at a bend in the lone winding path of stone slabs. From there they can clearly see a green expanse at the nape of the Triund summit. The blood red blossoms of rhododendrons light up the hillsides among pines, spruce, and Himalayan oaks. The breeze that wafts up the valley mixes the fragrance of the blossoming ﬂowers with a touch of humid air. The fog that surrounds them becomes clouds for the valley people, obscuring the snow peaks. Looking down over the spread of Kangra Valley, Tashi points to a small forested hill and says, “That’s McLeod Ganj.”

“But I can’t see,” Zumki protests, peering through oversized binoculars.

The trekkers have now reached Triund. Tents are being raised, large rucksacks are being dug into. Clothes, bedding, and edibles are spread across the green cover of pristine meadows. Someone is already brewing tea on a hearth made of three rocks. Smoke from the wood-ﬁre rises along with the vapor of the bubbling tea. “After lunch we should climb up to the snow-line at Ilaka,” says Tashi’s friend. “You should bring your snow lion girl with you. Who knows, we might get a rare glimpse of the mythical beast up there,” he teases.

Back in the tent, the tired little girl is taking a rest, lying down against her sleeping bag. Tashi leaves her in the care of an old man who is also staying behind. The rest of the group leaves for Ilaka.

Summoning her courage, Zumki emerges from the safety of her shelter and stands rooted to the spot. A giant snow lion comes rushing toward her from the rocks and stops right before her. She doesn’t move. The drum beats fall, everything has suddenly frozen in a moment of silence.

Zumki looks up at the giant animal and her jaw drops in amazement on seeing the humongous head of the lion. She slowly reaches out, to touch the white hair at the animal’s chest. Her ﬁngers, and then her little hand, feel the softness of the white coat. As she runs her hand down the length of the animal’s arm, the beast shrugs a little. The eyes blink.

Suddenly the rhythmic music of the drum, ﬂute, bells, and the cymbals comes alive and the lion jumps into action, dancing to the tune. Making a circle, it comes around to face Zumki who then dances with the lion. They prance around, to the right and to the left. Then the snow lion rises up, standing on its hind legs. Zumki claps loudly and repeatedly jumps up and down in jubilation.

Looking at the standing lion, Zumki raises her left hand and wiggles it in the air to tell him to follow her actions. Now her right hand wiggles, now she shakes her head vigorously and says, “Boo.” Then she says, “Follow me.” The lion raises both paws to his ears and jeers, extending his tongue. “Now shake your butt, like this,” Zumki orders. “Now you do something,” says Zumki as she runs out of antics. The lion winks twice with its left eye, then winks twice with the right one. Unable to follow this, Zumki breaks into giggles.

Then the lion lies down on its belly and touches its right ear with its right foot. Zumki also lies down on the meadow, but again is unable to follow the lion’s actions. She falls down ﬂat on her back, breaking into laughter in front of the animal. Slowly touching the lion’s right forearm, in a silent moment she feels the giant paw and measures it with her tiny palm. She then sits enclosed in the giant’s embrace. Feeling the softness and the warmth of the white coat on her cheeks, she lies down and slowly falls asleep, breathing lightly in the arms of the mythical beast.

Just then, something moves in the belly of the lion; a heavily-sweating dancer emerges from the belly, disheveled and exhausted. And now the head of the lion descends to the ground, and out comes the other dancer. From behind rocks the musicians then emerge carrying a big round drum, a bell, a pair of cymbals, and the ﬂute player. Someone picks up little Zumki and takes her to the tent. The head dancer says: “Come on, let’s pack, the picnic is over. We’ve practiced enough, let’s go back down. Else it’ll be dark when we get home.”

As the hikers return to the tents, the dance artists are seen leaving the spot in a single ﬁle, slowly descending the steep sides of the green hill, following the narrow and treacherous stony path.

Tashi wakes up his little girl sleeping in the tent and gives her stones that he picked up from the higher mountains. She rushes outside and looks around, turns back, and demands to know, “Where is the snow lion? He was here. I met him. We played together.” Tashi isn’t impressed. He says, “You were sleeping. You must have been dreaming.”

“No!” protests the combative child. “He’s real. He was here,” she says, pointing to the green meadows that she rolled upon with the animal as they executed their dance.

Tashi follows his daughter to the patch in the ground where she points. Zumki picks up something from among the blades of grass and hands it over in triumph as irrefutable evidence—long strands of white and green hair.

Holding the wisps of evidence clenched between his thumb and index ﬁnger, Tashi kneels down in front of his daughter and declares: “Yes, only the kindest and purest of heart can see the snow lion.”

From Old Demons, New Deities. Used with permission of OR Books. Copyright © 2017 by Tenzin Tsundue. 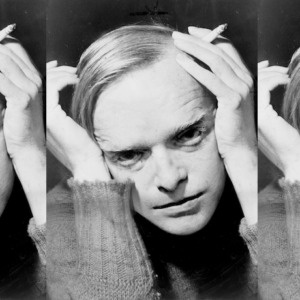