Can One Writer Curse Another for Life?

Saturday would have been Truman Capote’s 93rd birthday, which seems as good an excuse as any to revisit this bizarre and mean and strangely prescient “open letter” that William S. Burroughs wrote to Capote after the publication of In Cold Blood.

As Thom Robinson writes at RealityStudio, Burroughs had long been dismissive of Capote—and sometimes resentful of his success. For his part, Capote was none too impressed with Burroughs, who wasn’t yet the literary star he would become. Robinson quotes Capote telling the Chicago Daily News in 1967: “I hate pop art to death . . . Now William Burroughs. He’s what I’d call a pop writer. He gets some very interesting effects on a page. But at the cost of total lack of communication with the reader. Which is a pretty serious cost, I think.”

In the open letter, Burroughs mentions “the recent exchange of genialities” between Capote and Kenneth Tynan. He’s referring to the scathing review of In Cold Blood, which Tynan published in the Observer in March of 1966, accusing Capote of refusing to help Hickock and Smith, the murderers at the center of the book:

For the first time an influential writer of the front rank has been placed in a position of privileged intimacy with criminals about to die, and—in my view—done less than he might have to save them. The focus narrows sharply down on priorities: does the work come first, or does life? An attempt to help (by supplying new psychiatric testimony) might easily have failed: what one misses is any sign that it was ever contemplated. He sacrificed them for money.

In a 1972 interview, Denis Brian asked Capote if he’d ever met anyone “absolutely evil” (they used to ask much more interesting questions in interviews than they do now, it appears). He responded,

I think Kenneth Tynan is absolutely evil, I really do. He’s evil because he’s the ultimate in hypocrisy and duplicity. . . . he was pretending to be such a friend of mine, and living in my house, and I was so generous to him in every way. And all the time, months before the book came out, he was plotting this attack on me, for no reason, except what he was going to get out of it. It was reprinted everywhere in the world and he made a lot of money out of it. To me, that’s really evil.

In the below letter, Burroughs engages in a sort of bizarre role-play, claiming (it seems) to speak for a department responsible for the cosmic fate of writers. He tells Capote that he has been following him closely, reading his works, his reviews, and his actions, even interviewing his characters, and that he has decided to withdraw the talent given to him by the department and curse him to never write anything good again—as if he were a minor god of creative action, or king of the muses. Robinson points out that Burroughs actually believed in curses at this time, and maybe he was right, because his damning words came true—he never wrote anything good again. Read Burroughs’s attack on Capote below. (He’s also not too keen on the New Yorker.)

This is not a fan letter in the usual sense—unless you refer to ceiling fans in Panama. Rather call this a letter from “the reader”—vital statistics are not in capital letters—a selection from marginal notes on material submitted as all “writing” is submitted to this department. I have followed your literary development from its inception, conducting on behalf of the department I represent a series of inquiries as exhaustive as your own recent investigations in the sunflower state. I have interviewed all your characters beginning with Miriam—in her case withholding sugar over a period of several days proved sufficient inducement to render her quite communicative—I prefer to have all the facts at my disposal before taking action. Needless to say, I have read the recent exchange of genialities between Mr. Kenneth Tynan and yourself. I feel that he was much too lenient. Your recent appearance before a senatorial committee on which occasion you spoke in favor of continuing the present police practice of extracting confessions by denying the accused the right of consulting consul prior to making a statement also came to my attention. In effect you were speaking in approval of standard police procedure: obtaining statements through brutality and duress, whereas an intelligent police force would rely on evidence rather than enforced confessions. You further cheapened yourself by reiterating the banal argument that echoes through letters to the editor whenever the issue of capital punishment is raised: “Why all this sympathy for the murderer and none for his innocent victims?” I have in line of duty read all your published work. The early work was in some respects promising—I refer particularly to the short stories. You were granted an area for psychic development. It seemed for a while as if you would make good use of this grant. You choose instead to sell out a talent that is not yours to sell. You have written a dull unreadable book which could have been written by any staff writer on the New Yorker—(an undercover reactionary periodical dedicated to the interests of vested American wealth). You have placed your services at the disposal of interests who are turning America into a police state by the simple device of deliberately fostering the conditions that give rise to criminality and then demanding increased police powers and the retention of capital punishment to deal with the situation they have created. You have betrayed and sold out the talent that was granted you by this department. That talent is now officially withdrawn. Enjoy your dirty money. You will never have anything else. You will never write another sentence above the level of In Cold Blood. As a writer you are finished. Over and out. Are you tracking me? Know who I am? You know me, Truman. You have known me for a long time. This is my last visit.

[letter from the Burroughs Archive of the New York Public Library’s Berg Collection, text from Letters of Note] 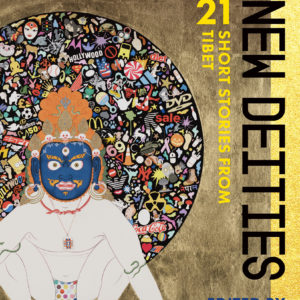 Zumki stops her dad in the middle of the bustling New York street and insists that he tells her the snow lion story again....
© LitHub
Back to top