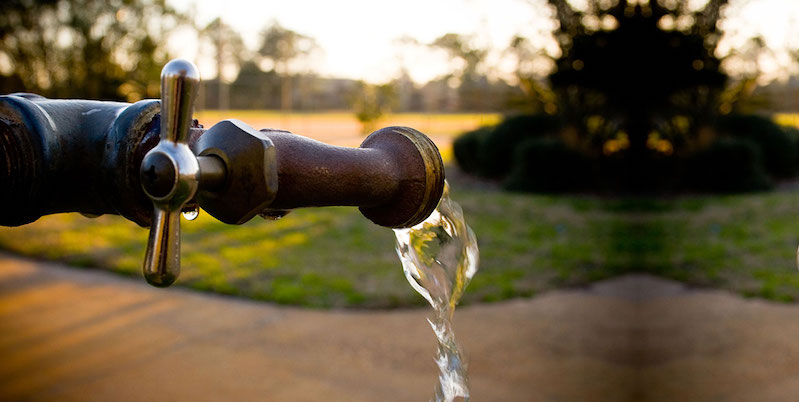 David Hardin on Telling the Story of Flint, Michigan

Recently, I listened to a conversation between New Yorker editor David Remnick and Dr. Atul Gawande, a surgeon, MacArthur Fellow, Harvard professor, and medical advisor to President Joe Biden. They discussed the looming difficulties of vaccinating a nation as diverse and divided as the United States. Remnick and Gwande addressed the challenges of manufacturing and distribution, keeping and accessing accurate records, and ramping up from scratch a federal response to what is one of our gravest national threats in the last century. They were recounting, it occurred to me, a story many Americans seem to have forgotten: one of people coming together as a community. A once familiar story of the essential virtues of commonwealth.

Listening to the discussion, I shared their confidence that the nation was equal to the clinical, industrial, and logistical challenges of mass inoculation. We landed men on the moon, after all. Beat polio. Delivered justice for the victims of Osama bin Laden. Invented jazz. Dr. Gawande was less sanguine about modern America’s ability to unite around a common cause, this nation of immigrants lured by freedom, opportunity, and the notion of liberty and justice for all. He cited the polarizing mask divide, the politicization of public health recommendations, and the spread of misinformation, no less insidious than that of the virus itself. Dr. Gawande’s harshest criticism was reserved for President Trump and his failed leadership, his refusal to take responsibility for a pandemic that has killed well over 300,000 Americans so far, the death toll mounting exponentially.

As the conversation unfolded, I couldn’t help but think about the outpouring of support for the citizens of Flint I witnessed firsthand a few years ago. I spent five months at the height of the water crisis as a volunteer with the Red Cross, delivering bottled water to residents unable to access mass distribution sites throughout the city. Corporations donated millions of cases of water. Citizens from around the country gave money to the American Red Cross, local churches, and community organizations. Michigan companies large and small dispatched volunteers to distribute water and filters. Individuals gave time and expertise.

Americans have big hearts, these sons and daughters of economic, political, and religious persecution; refugees from environmental disaster; descendants of enslaved Africans and indigenous survivors of genocide. And yet, for all our charitable generosity, relinquishing personal liberty for the common good can be a much harder sell, particularly at a time when political candidates and elected officials stoke rage for political gain. One man’s liberty is another man’s burden, the knell of that burden rendered barely audible beneath the cacophony of louder voices, the incessant howls of the aggrieved.

The world’s wealthiest democracy, a nation that has yet to make peace with its original sin of slavery, unable to reconcile an ambivalence toward people of color, the poor, and immigrants, could be accused of resting on its laurels, that of the ideal of liberty and justice for all. It’s a paradox that wouldn’t be out of place in any neighborhood sandbox, communal spaces where cooperation is prized above competition. Sharing is difficult, however, even when the toys belong to everyone—and no one. Understandable, given the strict dichotomies of playground politics and the nascent reasoning abilities of preschoolers. Negotiating the costs and benefits of the commonwealth is infinitely more complicated as we graduate to ever larger sandboxes.

Social justice was the last thing on my mind when I set out to write about my experience in Flint. Preserving small but illuminating vignettes, recording banal social interactions, capturing moments of grace and absurdity, focusing in on the particular to the exclusion of the whole—the book’s gestation was less than promising. That it might even be worthy of a book, was an inspiration slow to dawn. My approach was that of a painter willfully ignoring the rules of composition and form, to render detail divorced from context. My process at the outset would have been familiar to the songwriter who ignores mood, melody, and meter for random, fanciful arrangements of notes. Conceiving my observations as the constituent elements of a much broader social, political, racial, and personal narrative required courage, giving myself permission to tell a more fulsome story.

Americans have big hearts, these sons and daughters of economic, political, and religious persecution; refugees from environmental disaster; descendants of enslaved Africans and indigenous survivors of genocide.

To the extent that I’ve managed to do that, finding the thread of my own grief within the broadcloth of Flint’s suffering provided a way into the narrative, and a through line to broader considerations of racial justice and family tragedy. What, exactly, are people owed when, historically, the principals of commonwealth have been applied so capriciously across so diverse a nation? When one person remains to tell their version of a relationship consumed by love, betrayal, and ambivalence.

Jared Bernstein, an economist who advises the Biden administration, calls it the “YOYO economy.” You’re on your own. Investment in health care, retirement savings, affordable college, and job security, the costs once shared by government and corporations, have been shifted to the individual. The gig economy appears to promise freedom and unfettered liberty for the individual, but the reality is much starker. Many are on their own, unnervingly so. Like the governors of states hit hardest in the early days of the pandemic who scrambled to find enough PPE, they find themselves competing against one another tooth and claw, their success, someone else’s missed rent payment.

Military enlistments were said to have soared in the months following September 2001. It feels good to imagine we matched the grit and sacrifice of the Greatest Generation who signed up in droves after Pearl Harbor. In fact, enlistments rose only modestly, peaking in 2002. Our endless war has been waged primarily by the poor and people of color. Globalization, deregulation, and the systematic transfer of wealth by congressional fiat to top tier, self-styled job creators, has driven economic inequality to extremes not seen since the Gilded Age. Corporations are people, decreed the United States Supreme Court. What kind of people? one might ask. God-fearing patriots who cherish liberty above all else, the official answer. The communitarian spirit of the neighborhood sandbox itself seems poised for a reset. How long before access is restricted to kiddies whose parents are willing to expose them to never-ending pitches for Skittles and the latest Disney vehicle? Tiered subscription will of course prevail in the better neighborhoods.

I went to Flint enraged by the mistreatment of Flint’s residents by our leaders in Lansing, rage fueled by grief over my mother’s death and unresolved feelings about our shared past. The story I wanted to tell emerged over time, with great effort, and only after my eyes had been opened to the hardships endured by the people in Flint. I couldn’t locate empathy for the story of my mother and me without first finding it within the beleaguered landscape of Flint.

Dr. Gawande argued for an egalitarian approach to coronavirus vaccine distribution but predicted that the backlash in the United States over mask mandates presaged an ugly battle for the right to immunity. The Centers for Disease Control and Prevention have issued guidelines for a vaccine distribution protocol, but states will ultimately determine who receives the first doses of vaccine, with governors essentially presiding over who lives and who dies. Idaho’s roster of those deemed “essential” will vary from that of West Virginia’s. Lobbying will be intense as interest groups exert influence, juiced by the value of their political clout. There is reason for hope with an incoming administration guided by facts and grounded in fidelity to science—leaders unafraid of expertise. Striking a delicate balance between liberty and the common good, however, will likely play out in old and familiar ways.

What, exactly, are people owed when, historically, the principals of commonwealth have been applied so capriciously across so diverse a nation?

The good citizens of Flint, while by no means the worst victims of America’s misbegotten myth of individual liberty, are uniquely representative of this inflection point in US history. The poor and people of color have always borne the brunt of crisis, be it pandemic, recession, natural disaster, poisoned water, or police killings. Despite declarations of a post-racial America following the election of Barack Obama, racial inequity is an old, inconvenient truth finally seeing the light of day.

What little liberty people of color and the nation’s poor do enjoy, extends only as far as the expansive liberty enjoyed by corporations, private equity, Wall Street, the investor class, and the legislators who are dependent on their largess. General Motors took the liberty of abandoning Flint in 1999 for greener, low-wage pastures of lax regulation. The state of Michigan took the liberty of abandoning Flint to penury while transferring public funds to corporations demanding welfare in the form of tax breaks, subsidies, public investment in infrastructure, and the unholy right to self-regulation. A state-appointed city manager took the liberty of poisoning the majority-Black city to extend low taxes and freedom from government interference to more fortunate Michiganders.

The people at the top, those most responsible for the decisions that led to one of this nation’s worst man-made environmental disasters, took the liberty of avoiding prosecution afforded them by privilege and the political insignificance of their victims. Perhaps privilege does have its limits, however. Earlier this week, Former Governor Rick Snyder and eight other state officials were indicted on 41 counts of felony and misdemeanor for their role in the water crisis. When it comes to Flint, everyone shares some culpability.

I arrived in Flint carrying the baggage of my own cultural and racial biases but was too consumed by emotional chaos for any kind of meaningful reckoning. In the earliest drafts of my book, I sought to avoid overt references to race. My conceit? Virtuous equanimity, a misguided fidelity to color-blindness. But the act of writing itself exposed the self-deception at the heart of the enterprise. Circling closer and closer to difficult personal truths over many months of rewrite and revision, it became increasingly clear I could no more avoid my own reckoning with race than deny the bittersweet lilt of our lifelong waltz, mine and my mother’s. I was averse to delving too deeply into either one but discovered that stories worth telling demand a confrontation with our greatest fears. In my case, it didn’t hurt to have collaborative readers, my editor and my wife, gently nudge me in the right direction.

I set out to write a collection of amusing, perhaps even edifying, vignettes that proved bloodless, estranged from the sweet mess of people’s lives, including my own. If I thought I could get away with writing something worthwhile about the people of Flint, about my own family, and remain unscathed, I had another thing coming. Weaving together two separate narratives, creating a balanced composition greater than the sum of its parts, was daunting. Whether or not I was wholly successful, I like to think elements of both stories were sacrificed for the greater good.

Collectively, we lay claim to the myth of an equitable umbrella of liberty for all. In practice, the armature is broken, the fabric of commonwealth worn thin over the heads of our most vulnerable citizens. The neighborhood sandbox is communal space, the sand itself concealing lost treasures waiting to be rediscovered. Our worst tendencies have been fully exposed in places like Flint, in states that refuse to mandate public health measures—by the depravity of our leaders and their surrogates these past four years. Perhaps it’s not too late to dig deeper, excavate our better angels, rediscover virtue in the common good. 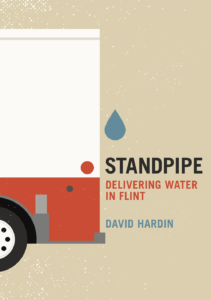 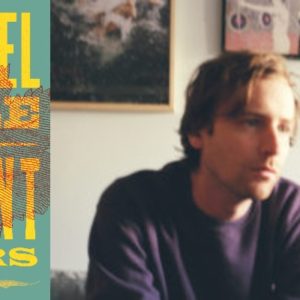 Michael Bible is the guest. His new book, The Ancient Hours, is out now from Melville House. From the episode: Brad...
© LitHub
Back to top
Loading Comments...