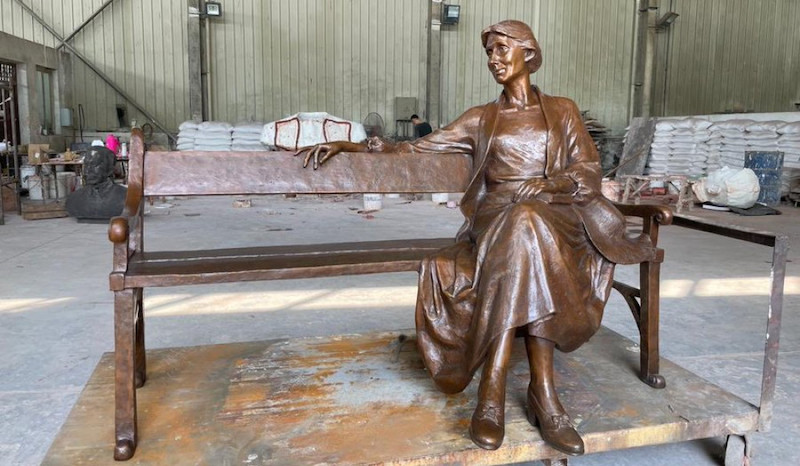 You can finally take a selfie with a full-size statue of Virginia Woolf.

Today, the first full-size statue of Virginia Woolf was unveiled by the river at Richmond-upon-Thames, where she lived from 1914-1924.

“There are so few women represented in sculpture,” sculptor Laury Dizengremel told The Guardian. “I find it quite remarkable that [Woolf] will be situated where so many people will walk past, where so many women and girls will be inspired. Woolf sits on a bench, holding a book, in a pose intended to encourage interaction. “It’s going to get rubbed raw and once in a while it will need to get re-patinated—big deal,” Dizengremel said.

The statue is the result of a campaign successfully funded by the public, despite some concerns that the riverside site was insensitive, considering the manner of Woolf’s death. Locals, however, voted overwhelmingly in favor of the installation, which highlights Woolf in a peaceful moment.

“It has raised a few eyebrows because we’ve got her gently smiling and enjoying her day, which goes against the stereotype of her being an anguished artist,” said fundraiser Cheryl Robson. “There’s a bust of Woolf in Tavistock Square that depicts her as an anguished tortured genius. She hated that bust, so it’s pretty awful that’s the thing that has come to represent her after her death—it’s so stereotypical of the idea that the only way a woman can be a genius is if she’s mentally ill. So we’re challenging that trope. If you read her diaries, every day she walked her dog along the river in Richmond and sat and enjoyed the view. So it’s true to history, and I think people have enjoyed the idea that they can sit next to her.”

And, of course, take a selfie.