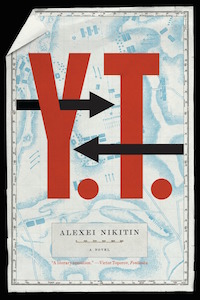 The following is from Alexei Nikitin’s novel, Y.T.. Alexei Nikitin was born in Ukraine, USSR, in 1967. He studied physics at Kiev University, spent time in the army, and worked in the gas and nuclear industries—including devising an emergency system for suppressing dust contamination from the Chernobyl sarcophagus. He is the prize-winning author of many novels and novellas. Y.T. is his first work to be translated into English.

My e-mail address is istemi@ukr.net. Whenever I give it out over the telephone the other person is sure to ask ‘Is what?’ ‘Istemi is a name,’ I say and spell it out, ‘I-S-T-E—ISTEMI.’ An address such as davidov@ukr.net or adavidov@ukr.net would suit me better— my name is Alexander Davidov—but when I was setting up the account those addresses were already taken, and I didn’t feel like messing around with numbers and coming up with something along the lines of davidov04. Then I thought of Istemi.

Istemi was the last sovereign ruler of the Khanate of Zaporozhye. He brought an end to the war with the Arab Caliphates, and during the Taman crisis he sacked Deputy Hetman Bagratuni and personally flew out to Tver to settle the dispute with Slovenorussia. Istemi wasn’t afraid of losing face in front of President Betancourt, and as a result he won. He didn’t win the war, no, but he won the peace. He was exacting towards the government and severe with the parliament. Sometimes I was afraid of him myself.

These days no one even remembers him. In the encyclopedia you can read about another Istemi, the younger brother of Bumin. Fifteen centuries ago, backed by fifty thousand mounted Oghuz Turks, the brothers’ tribe attacked the Rouran Khanate. The Rouran fell as readily as if it had been awaiting the brothers’ appearance . . . and there and then the Khanate was resurrected under a new name. The new khan was Bumin. A year later Bumin died. He was succeeded first by one son then another. Bumin’s offspring expanded the new empire in the east. They gained control over the Kyrgyz on the Yenisei, demanded tribute from the Northern Qi and the Northern Zhou and reached as far as the shores of the Yellow Sea. But, according to the law of the steppe, the heartland of the tribe remained with Bumin’s younger brother Istemi. Istemi didn’t quarrel with his nephews or struggle against them for power. He headed west, gathering tribes and states like windfall plums. He concluded a treaty with the Sassanid Emperor Anushirvan Khosrau—the Philosopher King—then attacked and routed the Confederacy of the Hephthalites to the east. Certain details of this war can be found in the Persian Book of Kings. Istemi’s daughter married Khosrau and gave birth to crown prince Hormizd. The title of Yabgu Khan, King of the Hephthalites, remains part of the title of Istemi’s descendants to this day. In alliance with Byzantium Istemi attacked Iran, then, without any allies, he attacked the Byzantine possessions along the Black Sea. Istemi reached as far as the Bosporus, invaded Crimea and laid siege to Khersones.

But Istemi did not take Khersones, and he soon left Crimea. His successors, however, remained in Eastern Europe from then on. The Khanate alternately expanded its borders—reaching as far as the shores of the Adriatic to the west and the Baltic marshes to the north—then retreated from the onslaught of its neighbors into a scarcely distinguishable strip of land along the shores of the Black Sea. More than once it fell into enemy hands, and five centuries ago it lost its historic shrine, the ancient capital of the khans at the mouth of the Itil, now called the Volga. The name of the Khanate changed through time: Khazaria, Cimmeria, Zaporozhye. I might be confusing the Zaporozhian Istemi with his namesake in the encyclopedia—to this day the history of the Zaporozhian Khanate is full of dark spots, which Russians euphemistically call ‘white spots.’ But no one is ever going to fill them in now.

The final ruler of the Khanate, Istemi, disappeared exactly twenty years ago. The Khanate’s archive went missing at the same time. The circumstances of Istemi’s disappearance were tragic for me and four other people. They led to serious upheavals for three of us, an incurable illness for the fourth, and the fifth seems to have perished. The mailbox istemi@ukr.net was opened in the name of Istemi, but I was the only one who used it.

I check my e-mail twice a day. Early in the morning and in the evening. There’s no particular reason for this other than it just works for me. In the morning I have my breakfast half listening to the news on television and sifting through all the mail that has accumulated overnight. Usually it’s just spam and e-mails from friends now living in America. I get a lot of spam—I don’t know where it all comes from. But there isn’t much genuine mail. I discard the spam without looking at it, quickly read the mail and go to work. It’s late when I come back home, and before I go to bed I check my account again. In the evening I get mail from friends over here and even more spam. I take my time over my evening mail, then I glance at the morning mail once again and go to sleep shortly afterwards. Because in the evening, after work, all I can do is sleep. Nothing more. I answer my mail on Sundays, all at once. It’s just what’s easiest for me.

Work eats up all my time. I promote American fizzy drinks. It’s a tiresome, uninteresting job. I can’t imagine anyone actually liking it. Maybe that’s because I’m older than everyone else in our office. The young are gamblers—they see a career as a game. Bonuses, bonus points, career advancement . . . they’re like dogs chasing a mechanical hare. They’ll play along for five years or so, pursuing the hare, but then, like me, they’ll start scratching their heads and wondering what they’re wasting their time on. On helping a bunch of guys they’ve never even met to sell as many plastic bottles of sickly-sweet brown swill as possible—water with a bit of concentrate and masses of preservatives, flavorings and dyes . . . Wasting their time on that? Lots of people will start scratching their heads, but in the end it depends on the person. Most of them will sell fizzy drinks for the rest of their lives. The pay, mind you, is not to be sneezed at.

When I last checked my account there was an e-mail addressed to Istemi. Not to me but to him personally: for the attention of His Majesty, the Khan of the Khanate of Zaporozhye. The e-mail arrived in the morning, sent from a Hotmail address consisting of assorted letters and numbers which presumably made some sense to the account holder but which meant nothing to me. I was in a hurry to get to work, so I decided to wait until evening to read it. All day I regretted my decision, wondering who might have sent the e-mail and what was being proposed to His Majesty.

I read it in the evening:

Your Majesty, my dear brother In the spirit of friendship, I am forwarding to you herewith a copy of my ultimatum to Slovenorussia.

Attached to the e-mail was the ultimatum. I looked at it in astonishment, unable to believe I was seeing those words once more.

Recent history has shown that there exists within Slovenorussia a revolutionary movement determined to detach from the Holy Roman Empire a number of its territories.

This movement, which came into existence under the very eyes of the Slovenorussian Government, at long last has reached such proportions as to be manifest outside the borders of the Confederation in the shape of acts of terrorism—a series of murders and attempted murders. The Government of the Slovenorussian Confederation has undertaken no measures to suppress this movement.

It has tolerated the criminal activity of various societies and organizations against the Empire, the unrestrained zeal of the press, the participation of officers and officials in revolutionary activities, unwholesome propaganda in educational establishments and, in short, it has tolerated all manner of activity which may incite within the population of Slovenorussia hatred towards the Empire and contempt of its institutions.

The developments detailed above do not permit the Government of the Holy Roman Empire to henceforth maintain the patient and long-suffering stance which it has adopted for years in the face of events begun first in Tver and thence propagated throughout the territory of the Empire.

On the contrary, these circumstances compel it to bring to an end all such activities that threaten the peace within the Empire. Towards the achievement of these ends the Government of the Holy Roman Empire finds it necessary to demand that the Slovenorussian Government make an official statement to the effect that it condemns all propaganda directed against the Holy Roman Empire and that, as proof of the sincerity of this statement, it will withdraw all of its armed forces from the border of the Empire to the Marburg-Leibach-Trieste Line and return these cities, as well as the Istrian Peninsula, to the rightful possession of the Emperor of the Holy Roman Empire.

I knew these words only too well. There was a time when I had read them repeatedly and knew them by heart. I had kept the yellowed sheets of writing paper on which the ultimatum was printed at our dacha, between pages 44 and 45 of an ancient issue of Youth, coverless and thick with dust.

The letter and appendix stayed hidden in the magazine for almost seven years. All that time I was afraid someone would find it, someone who was looking specifically for the ultimatum, or else that, one fine summer evening as darkness fell, the last remaining document connected to Istemi, Khan of Zaporozhye, would be used to kindle the family campfire—vodka, potatoes, the mournful strains of ‘Black Raven’ and the buzz of mosquitoes here for the warm season.

But nothing happened to the ultimatum at the dacha. I brought it home again in the early 1990s—by then it was no longer dangerous. But at home I lost it. There’s no point describing just how hard I searched for it. Words are insufficient. Soon I moved to a new apartment, then another. The ultimatum—sent by Karl XX, Emperor of the Holy Roman Empire, to the President of the Sloveno-russian Confederation, Stefan Betancourt, and copied to the President of the United Islamic Caliphates, Caliph Al-Ali, the Lama of Mongolia, Undur Gegen, the Khan of the Khanate of Zaporozhye, Istemi—the last and only remaining document, in my safekeeping, that referred to the history of those states had disappeared.

But evidently someone still had a copy. Who? I rang Kurochkin. Kurochkin didn’t answer. 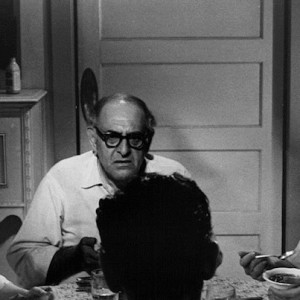 On My Abnormally Quiet Jewish Family My family was quiet. This is an unusual beginning to an essay by a Jewish person, but it’s true. My father, having grown...
© LitHub
Back to top