Writing My Own “Indian-American Novel” Meant Looking to California

Sameer Pandya on the Virtues of a Late Start

I didn’t think I would be 48 when I published my first novel. And yet, here I am. I realize now that I needed the time—and the starts and stops and starts—to figure out just what it means to write in the space between India and America.

In 1993, I had gone to a reading at the now closed Black Oak bookstore on the northside of Berkeley with my father. I was in the midst of my junior year in college and I had some vague sense of wanting to be a writer. I had asked my father along because I wanted him to see this world, to see how he would react to me wanting to be a part of it.

I had been coming to Black Oak since high school, when an English teacher had said that if he ever saw one of us there, he would give us extra credit. His trick had worked on aspiring bookish me. I had seen many writers read there—Martin Amis, Richard Ford—but never an Indian writer. On this particular evening, the novelist Gita Mehta was reading. I didn’t know much about her then, but her last name was familiar.

We knew plenty of Gujarati Mehtas, though I learned later that she wasn’t one. There weren’t that many Indians in the audience that day. But standing in the back, leaning against a shelf of books was a middle-aged man wearing dark, stylish jeans, a crisp white button down, and a navy-blue blazer. He had on loafers and wore a well-trimmed goatee. For much of that reading, I alternated between listening to the reader and sneaking looks at this guy.

At the end of the event, my father bought a copy of Mehta’s book and he told me to go pick another book out for myself. A brand-new book? Back then, I had made it a sport to see how many good, used books I could buy for as little money as possible. I had recently bought all of Camus and Nathanael West for just over ten dollars. But I wasn’t going to pass up this chance. I went and got Midnight’s Children.

I felt like I needed to write a big India novel; I needed to fulfill that ambition I’d felt at Black Oak. The problem, of course, was that I didn’t know the place.

I didn’t think about that man standing in the back again until some years later when I saw him being interviewed by Charlie Rose. He was sitting on that oak table, the room filled with his cigarette smoke: the late Sonny Mehta, the long-time publisher of Knopf. When I was growing up in India, if you somehow ended up with the nickname Sonny, it meant you had some vague cosmopolitanism about you, that you had travelled to England or America, that you drove around in a Mercedes-Benz sedan.

My first sense that I could be a writer, an Indian writer, came from listening to Gita read and staring at Sonny at Black Oak all those years ago. They seemed vaguely familiar to me and if she could mine her Indian past and present to produce pages, maybe I could too.

Back in college, I gorged on a lot of Raymond Carver because all the cool kids were gorging on him. In fiction writing workshops, I wrote minimalist, Carver-inspired short stories, but they simply didn’t work when they were populated by the Indian and Indian American people I knew. It was certainly a thrill to read those Carver openings: “That morning she pours Teacher’s over my belly and licks it off. That afternoon she tries to jump out the window.” This, however, did not translate to my immigrant world.

Sometime in high school, my uncle had given me his hardback copy of A House for Mr. Biswas, a novel I didn’t read until some years later. When I finally did, I read most everything Naipaul wrote. His early books about Indians in Trinidad—Biswas and the story collection Miguel Street—were full of characters with names I knew, living lives that were familiar. I felt that same literary sense of recognition in books assigned in history rather than English classes: Pico Iyer’s Video Night in Kathmandu and Hanif Kureishi’s The Buddha of Suburbia.

I graduated from college and while I desperately wanted to get an MFA, I was too scared to make that sell to my immigrant parents. And so, I did the more practical thing and went and got a PhD in literature instead. The mid-late 1990s were a heady, exciting time to be in graduate school: the Edward Saids and Homi Bhabhas and Gayatri Spivaks were shifting the ground beneath our postcolonial feet.

But what got me the most excited were the Indian novelists producing books at one hell of a clip: Salman Rushdie, Arundhati Roy, Rohinton Mistry, Amitav Ghosh, Anita Desai, Kiran Desai, and on and on. I still have a worn copy of the New Yorker fiction issue from 1997 with Ganesh reading on the cover. My heart fluttered when I saw the black and white photo taken by Max Vadukal of all these novelists, all intimately gathered in London. Somehow, I wanted to be in that family portrait.

They were all different writers, producing different books. But most of them were taking on one messy, exuberant, worthwhile subject: India. Its colonial history, its postcolonial dalliances; caste and religion and nationalism and communal violence and borders. This was what I wanted to write.

But at the same time, I was living out my American life, voting for presidents, learning and navigating color lines, understanding the insistent markers of class, reading Cheever on suburbia, Ellison and Morrison on race, and Roth on post war Jewish life. I finished graduate school, took an academic job, and eventually left it, finally ready to make a go at writing fiction. And I did: I wrote and published a book of stories on Indian American immigrants in California.

But still I felt like I needed to write a big India novel; I needed to fulfill that ambition I’d felt at Black Oak. The problem, of course, was that I didn’t know the place. I’d left when I was eight and made some trips back here and there. I wrote and wrote at this novel, added and subtracted, and I couldn’t really figure out why it was taking so long to complete, why its emotional heartbeat sounded so irregular.

It’s easy to see now what I couldn’t see then: I didn’t know that my actual topic was less about India and more about my memory of the place, and what happens to those memories when history gets in the way. When I left India at eight, my sense of the place and the people took deep root in my head, a snapshot of a time and a place. India, of course, moved on and changed as places do, producing hundreds and thousands of new snapshots.

In the summer of 2017, I had gotten a wonderful fellowship in which I lived and wrote in an Italian castle. I had arrived, thinking that Umbrian meals would do the trick in helping me finish the India novel. But from the very first morning I sat down at my new desk, I knew that I wasn’t going to. A couple of months before, I had written the first chapter of something new, something contemporary, something that sounded like me and the California life I knew, something funny.

On the cork board above my temporary desk, I mapped out the chapters of the novel I wanted to write. And over the next six weeks, I wrote very quickly in the voice of my middle-aged Indian American narrator, in the midst of a colossally bad week. I wrote with the freedom of being in a room that had none of my own personal history.

Sameer Pandya is the author of the story collection The Blind Writer, which was longlisted for the PEN/Open Book Award. He is also the recipient of the PEN/Civitella Fellowship. His fiction, commentary, and cultural criticism has appeared in a range of publications, including the Atlantic, Salon, Sports Illustrated, ESPN, and Narrative Magazine. He teaches creative writing and South Asian and Asian American literature at the University of California, Santa Barbara. Members Only is his first novel. 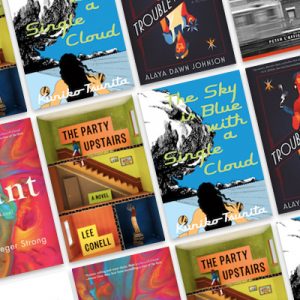