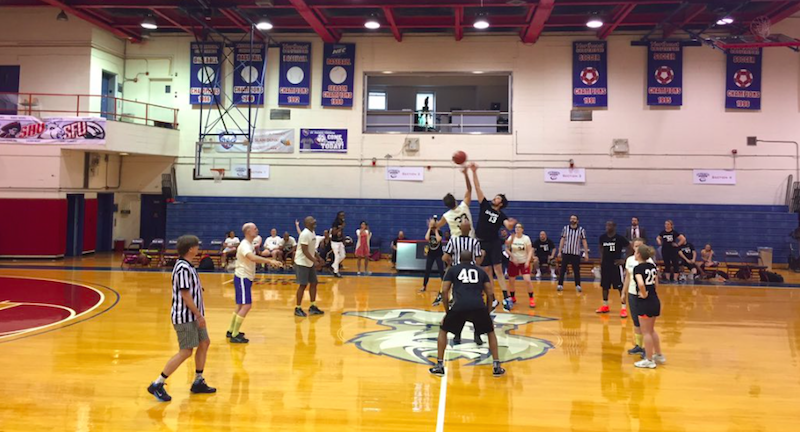 Defense was the name of the game Wednesday night in Brooklyn, as the Writers scrapped, kicked and clawed their way to a gutsy 37-31 victory in the second annual “Other NBA” game, completing a title defense that some said was impossible in this era of free agency, salary caps, e-book readers and Ferrante Fever. “We just kept fighting,” said the Writers’ Tea Obreht after the game. “Some nights there’s a lid on the bucket and you have to just put your nose down, sharpen the old elbows and pray for rain.” It was looking dry as a ministers’ convention in Elk County Kansas until the Writers mounted a furious second half comeback, led by game MVP Mitchell S. Jackson, who finished with a team-high 15 points and 10 boards. After the final whistle, Jackson deflected talk of individual accolades and praised his fellow Writers’ grit. “It was a team effort from jump street,” the smooth swingman told reporters. “Everyone had a job to do, and collectively we took care of business.”

Business was supposed to be the Publisher’s specialty, and in the early stages, they certainly looked the part. Led by stalwarts Jonny Diamond and Matt Ringler, whose clinical inside-out play cut the Writers’ man-defense to shreds, the Publishers built a steady lead and went into the locker-room with a three-point edge.

Kristen Radtke, who added a nifty Euro step to her game this offseason, was the lone bright spot for the Writers in the first half, scoring an efficient four points on three attempts and playing her signature brand of full-court, havoc-and-hell defense, but to little avail, as her teammates struggled to protect the ball and create quality looks.

So what changed at the break? Writers’ coach Dan Sheehan relived his rousing halftime speech after the game. “I reminded the lads they were favorites going in, and I told them about them Russian mobster fellows down in Brighton and their general attitude toward welchers, and how I have those jet-ski payments to make. Defense, too. We talked a bit about defense. It was a confluence of messages, really.”

Writers’ big man Alex Gilvarry was more direct. “Did you see that kid dance?” he asked, referring to the half-time entertainment, courtesy of Zakir from the Mira Jacob Rhythm Factory, a fan favorite and, it turns out, an inspiration to the players, as well. “That kid,” Gilvarry went on, “taught us a true lesson about the human form and excellence and dancing like everybody’s watching, you know what I mean?”

The Writers came out in the second half like a squad reborn. Their Big 3 of Jackson, Gilvarry, and Reginald Betts was too much for the Publishers to handle. The halftime deficit was quickly erased, and the Writers soon found their offensive flow thanks to some on-the-ball wizardry by Natalie Diaz and Jackson’s sharp shooting.

Still, there were moments in the fourth where the game could have slipped away. Publisher’s leading man Jonny Diamond got the hot hand late in the game, scoring from long range and taking the ball hard to the hole. If Diamond had been given a continuation on a late fourth-quarter drive against defender Charles Bock, he would have stood at the line with a chance to pull his team even. “It wasn’t meant to be,” a gracious Diamond said after the game. “Would LeBron have gotten that call? I don’t know. That’s for you to decide, I guess. I’m just a humble ballplayer, not an oracle.”

In the end, the Writers seized control and mounted a six-point lead, which was too much for their rivals to overcome. At coach Lisa Lucas’ urging, the Publishers dribbled out the clock, while Jackson and Rowan Ricardo Phillips began the celebrations, and the decidedly pro-Writers crowd debated whether to rush the court, then chose instead to focus on their complementary Shake Shack custards.

Proceeds from the game went to support BookUp, the National Book Foundation’s reading program for underserved youth, now with its first site for LGBTQ readers.

Tea Obreht had the last word, echoing Kevin Garnett’s “Anything is Possible” yawp-heard-round-the-world and dedicating her team’s victory to the BookUp kids. “The good guys prevailed,” she told reporters. “That’s so important for the kids to know.” 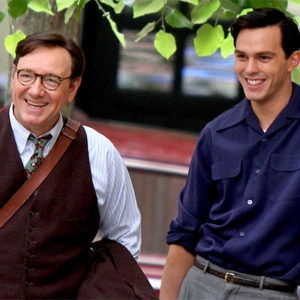 Welcome to Literary Hub’s column about all things adaptation. Every other Friday—the day films are released in Hollywood...
© LitHub
Back to top