On Hanging Out, Watching WWE, and Speaking Pig Latin with Dad

My father was born in 1922 and I didn’t arrive on the scene until 1979, three weeks before he turned 57. He had been asleep when my mother thought it best they leave for the hospital. “I think it’s time to go,” she said, shaking him awake. He jumped out of bed, flipped on the light switch, and threw open the closet door. “Well what am I gonna wear?!” he asked.

Advancing age and new fatherhood weren’t mutually exclusive. I’m told he volunteered for nighttime feedings in the early months of my life, preferring to let my mother sleep while the two of us bonded over 3am bottles in my yellow Sesame Street-themed nursery, its framed poster of Bert and Ernie keeping us both company in the moonlight. He was working for a newspaper, mid-way through a 50-year career.

I am listening to 1970s country as I write this. Merle Haggard, Waylon Jennings, Ronnie Milsap, Charley Pride, Kenny Rogers, and Conway Twitty: the soundtrack of my childhood transports me back to nights I would accompany my father on paper routes, sitting in the front seat with my feet on the dash and rolled-up newspapers filling the floorboard and the backseat. We are night owls, my father and I.

Along with how to roll a newspaper and, eventually, how to drive a stick shift, he taught me Pig Latin at an early age, something my mother never quite grasped, and soon we had a language all our own, an exclusive way to communicate. This continues to serve us well more than three decades later. Oo-day oo-yay unt-way a-yay ink-dray? (Do you want a drink?)

My father also introduced me to professional wrestling, another interest my mother didn’t share. This was Texas in the 80s, years before the sensationalized WWE you see today. We went to as many events as we could, always hoping that night’s Battle Royal or Royal Rumble would be the big one, that we’d be telling our friends about it the next day—how the Hart Foundation and the Mega Powers teamed up against the Four Horsemen. We’d exit the stadium dazed, as though we’d had chairs broken over our backs, had jumped off the top rope and narrowly missed driving an elbow into an opponent’s exposed midsection ourselves. Really, our biggest problem was deciding how to tell my mother we’d bought too many souvenirs again—Hulk Hogan bandanas, Ultimate Warrior pins, that night’s special edition beer cup. Sometimes, when I can’t sleep, I search eBay for these things.

We also followed the local Texas wrestling circuit, and were particularly taken with the tragic tale of the Von Erich family, whose patriarch, Fritz, lived to be 68 but was preceded in death by five of his six sons, at least three of whom killed themselves. Less sport than drama, wrestling was choreographed entertainment with a narrative tail; more than that, more than anything, it deepened our bond. We were a pair, a tag team with its own language.

When he wasn’t taking me to wrestling matches, in arenas as well as dive bars no fourth-grader had any business seeing, my father coached my softball team, using broken-down cardboard boxes to teach me how to slide properly and then getting himself thrown out of an all-star game when he disagreed with the umpire’s calls. A life member of the San Antonio Softball Association, and the coach of a men’s team at the time, it was only natural that he would coach my team, too. My mother and I spent many, many weekends traveling to softball tournaments in South Texas, Florida, Colorado, and elsewhere, keeping score, heckling the umps (and the other teams), and watching my father coach and, in a pickle, pinch hit. One of my favorite, rarely seen, photos of my father and myself was taken just before cheerleading tryouts my junior year of high school. I am wearing an obscene amount of makeup applied in a style that can only be described as “amateur,” and he is handing me a yellow rose, the flower he has always given me and, in fact, continues to put on my bedside table when I return home to visit. The photographer has captured us in a candid moment, almost in profile. We are laughing at something or other, as we often are. He has probably just called me “gal.” Having come from practice or a game, he is wearing a softball jersey and a ball cap. It is 1997; he is 75.

My father graduated high school in 1940. At ten, I accompanied him to his 50th class reunion, most definitely the youngest child of a graduate in attendance, if not the youngest, period. He joined the Army Air Corps and served in World War II, landing on Omaha Beach as part of the Normandy Invasion. I’m told he smoked for a while but gave it up well before I was born. I once found a photo of my parents back when they were dating that I thought showed him holding a cigarette to his lips with one hand and a pack in the other, but I was quickly corrected: it’s a toothpick and a deck of cards. Of course. Until recently, the man could not exit a restaurant without taking a toothpick for himself and one for you, too.

The best way to get to know my father is to play cards with him. We play at night, and we play for money. Bring your dimes and come prepared to lose. Thirty cents a hand. My mother usually only lasts for an hour or so before she goes to bed, when my father and I are just getting started. He is a natural-born storyteller, and you won’t make it three hands in before you learn something. This is still true for me, and I’ve been playing cards with him for as long as I can remember. Which is why I’ve started keeping the recorder close by. It’s how I learned my grandmother’s family is Cherokee, my grandfather’s, Texan. They had names like Coleman and Methel and Otis. My grandfather was “a railroad man” when my father was young. But “when the Depression hit,” they became sharecroppers.

If you’re lucky, these stories will give way to jokes. The teacher asked a class of first-graders if they saw anything unusual on the way to school. One little girl held up her hand. “I saw a dog that had run out of gas.” “How do you know it had run out of gas?” “Because I saw another dog giving it a push!”

Better not let your guard down; he always knows what cards you’re holding.

Allison Wright is the managing editor of the Virginia Quarterly Review. She also serves as president of the nonprofit literary organization WriterHouse and editor of Tiny Hardcore Press. Her writing has appeared in the Atlantic, VQR, Popular Mechanics, the Texas Observer, the Rumpus, and elsewhere. 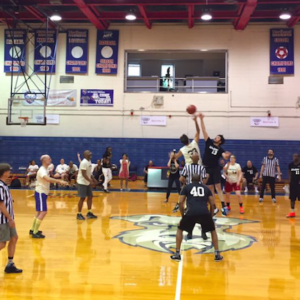 Defense was the name of the game Wednesday night in Brooklyn, as the Writers scrapped, kicked and clawed their way to a gutsy...
© LitHub
Back to top