Jason Diamond on the Importance of Work, and the Struggle to Write

“Do you ever sleep?”

I’ve spent years trying to come up with a clever answer, but nothing ever seems to do the trick. I work constantly, and since my work is writing, usually—hopefully—decent enough to be published online, people can see that I’m pretty productive on top of my day job as an editor. My workaholism, the product of an obsessive need to be busy at all times, is played out in public.

I want to say that, but I know it would make things awkward. I laugh instead. I’ve tried my best to not talk about my depression. I don’t want to bum people out.

My depression: the world is rendered in greyscale, made repulsive, its air viscous and smothering. Sometimes it lasts a day or two before the fog lifts, but then there are the deeper pits, something I sink into, like quicksand; if I panic then I disappear faster into the murk.

We all have our low moments, but when that moment stretches into a week, and then another, it can become impossible to shake the memory, even after the gloom lifts. Even after daybreak dusk is never far from the mind.

We also all have ways we try to feel better. Mine is work, writing. I write because if I stop, if I’m motionless, I run the risk of breaking down altogether.

Friends and professionals alike have told me this isn’t healthy, and they’re probably right. But in the end only I know how I’m feeling, and I will use whatever tricks I’ve taught myself over the years to try to be happy, whether it seems healthy or not. I feel good when I’m busy, electrified by research or puzzling over the perfect way to express an idea. I also have plenty of other things, and people, that bring me joy. I also understand there has to be a division between working and not working (even if I don’t always heed it). I don’t actively want to make my work into the sum total of my life, but I do need to feel productive in order to feel good.

Then I sold a book about my life… I had to craft my messy little experiences into something people would want to read. To start, I sat down with a big piece of bulky construction paper, the type they use for projects in elementary school, and I sketched out a timeline of my life, birth to present day. I added in the basics: “Grandma dying, age 3,” “Disney World, age 4,” first this, and last that. Then I started filling in the things I try not to think about, family things, sad things, and secret things. My life drawn up in front of me made me feel really uneasy. Had I lived too little? Too much? Had I lived a good life? My mind raced. And then I slipped. It had me—the black dog, as they say, tugging my sleeve—and it wasn’t going to let go.

I kept working. Plotting, sketching, writing, editing and then when I finished I did it all again. I was running like hell. High functioning: work until you can’t feel anything, especially pain, and eventually everything will just go back to normal. But this time I was tackling a long project with a lengthy and unknown time horizon all about revisiting things I’d thought were left behind. I was conjuring old memories that stayed with me after I shut my laptop. All that, and I was working a day job and contributing to other outlets and co-running a small literary website on the side. I had to work, now more than ever. To fail at this book would be my greatest failure of all, and my undoing. Everything was riding on this book, on staying the course, on keeping afloat. If I failed, it was because I wasn’t doing enough, and if I wasn’t doing enough, I’d die. I dwelled on life and death, how writing my life was the only thing keeping me from death. How I’d die anyway, so who cares?

I hadn’t gone there mentally since my teens. It wasn’t good. All the exercise and yoga and even the work couldn’t help me anymore, so reluctantly—worried I’d screw up my flow—I told my therapist. I told her everything over a few sessions, it just poured out of me. It didn’t feel good to let it all out, but it didn’t hurt. At the end of the third session, after hardly saying a word, my doctor finally asked me the one thing I had never even entertained: “Would you consider medication again?”

So there I was, trudging uphill in the inky sludge of my despair. The book was coming along, and I could see the end of the project. Maybe I’d get better then. Or maybe not. I realized that all the work I’d done for balance and mental health, for happiness, might only hold if I took a trip to the pharmacy. But would medication make it difficult for me to function at the level I’d grown accustomed to? My work makes me truly happy, but would I be able to do as much as I had in the past, would I be able to attack the day with the same level of energy I had without medication?

Now, this is the moment where I say, with conviction: I think medication is fantastic if that’s what you decide. Medication for mental illness, which is just another kind of illness no matter how many people want to deride and judge and say otherwise, is an incredible resource and I am privileged to have the option of taking medication if I want. Psych medications save lives. I’m sure once or twice they even saved mine. But knowing there is no one-size-fits-all magic bullet for emotional health, the prospect of medication triggers feelings in me of fear and helplessness leftover from my precarious teen years.

So I was stuck in this weird spot. Life with this book in the world was going to be very different. Friends started reading advanced copies and would email me things like, “I had no idea what you’ve gone through.” I started to panic. I knew what I was getting into writing a book about myself, but to be faced with people actually reading it, people who care about me, who I never wanted to admit these painful things to, people who might have similar things going on in their lives or in their past… that was strange. I thought I was prepared for it, but I wasn’t. I withdrew for a few weeks, made my life the commute from my apartment to my work, then back home where I kept to myself. I crashed.

When I got out of that bout, something changed. I was sick of it, sick of the sadness. I wanted to tell people who read my book that I was getting better, I was happier, that I was working on things. So faced with my therapist’s suggestion, I had one of those cinematic make-or-break moments, two of them, in fact. One of them, like many great stories of people trying to get out of bad situations, involved Bruce Springsteen.

I’d picked up his memoir, Born to Run. The Boss: one of the last American superheroes. Old school Bruce from New Jersey. Nothing can get that guy down, right?

“I was too depressed to concentrate on anything of substance,” Springsteen writes towards the end of his story. We can imagine the normal lows and highs, the days of playing in bar bands, the grueling late night recordings for songs we all know by heart, but here was this person whose music I’ve loved all my life, talking about his own battles with depression. “I couldn’t live like this, not forever,” he resolves, ultimately resorting to medication just to get out of the fog.

It was nice to read. I felt less alone, but then I started to think, “That’s Bruce Springsteen. The dude who wrote “Thunder Road” and whose butt graces the cover of Born in the U.S.A. He’s different.” I couldn’t comprehend Springsteen as mere mortal. I know Bruce is just a regular guy, but it was difficult for me to simply believe that if Bruce Springsteen could do it, so could I.

It took something unexpected, just a few days later, to help me really put things into perspective. It was fate, honestly. That’s the only thing I can consider it.

The comedian, writer, and television show host Chris Gethard, who deals with a lot of these kinds of thoughts and feelings, put it best in his one-man show Career Suicide, when he talked about how there is one illness people make you feel bad about trying to treat. How we attach all kinds of stigmas to people dealing with mental health issues, and even more when they’re trying to fix those things. He even talked about his own apprehension about going on medication to help him feel better, worried that if he did then he’d lose his edge. Gethard was saying exactly what I’d been afraid of all along. Springsteen is Springsteen, but Gethard is somebody around my age who I could absolutely relate to. Seeing this show couldn’t have happened at a more important time for me.

I sat in the audience stunned to hear another person express things I’d been going through alone. It sounds dumb just writing it down, but it’s true. It was comforting. I’d thought my secrets were a source of strength, but they’d been just another weight holding me down. This validation, however small, started a fire in me that grows and burns bright. I wasn’t alone. I didn’t have to stop working, but I’d work because I wanted to, because control wasn’t something I had to do but something I’d had all along. I wasn’t alone. I could work to stoke that fire, to put light into the world, to maybe even help illuminate the way for others stumbling blindly in the dark. Work and work hard. Work not to run but to stand your ground. 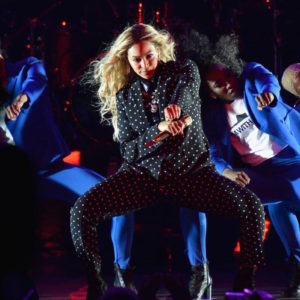 Art may imitate life, or life may imitate art, but either way, it would probably be useful to take a breath for edits once...
© LitHub
Back to top