Against the instant commodification of culture

Art may imitate life, or life may imitate art, but either way, it would probably be useful to take a breath for edits once and a while. Maybe pause for a second draft. A top-to-bottom rethink, perhaps, before we just grab whatever loose bit of culture we can find and crank out a book, a show, or a film, or otherwise commodify it for a quick and oh-so-timely buck. Of course, people have been making quick bucks off culture and politics for decades, and this isn’t a new complaint. But right now, when the nation is still reeling from the results of the presidential election, the impulse feels particularly egregious, and generally—and sorry, but this really is the word for it—icky.

First of all, there’s A&E, who announced this week that they’d be airing a “compelling documentary series” entitled Generation KKK in January. And yes, it’s actually about the KKK. According to the press release:

“Throughout eight one-hour episodes, the series follows four families: an ‘Imperial Wizard’ who hopes to groom his teenage daughter to take his place; an Iraq war veteran and proud member of the KKK determined to raise his four-year-old son to embrace his views; a young man who sees his close friend and Klan leader as the father he never had, asked to pledge his loyalty to the KKK; and a fifth-generation Klan family struggling to keep up the legacy.”

The neutrality of the language used here—and its banal resemblance to all “family drama” fare: raising children, “the father he never had,” “struggling to keep up the legacy”—betrays its purpose. The press release doesn’t want to give anything away. It’s not as though the KKK is a big viewing block (I don’t think), but it reads to me as though the network is bending over backwards not to seem politically skewed one way or the other. Which is fine, when “one way” isn’t towards the KKK.

To be fair, the show also promises to feature “anti-hate and peace activists” who apparently “develop deep relationships with Klan families attempting to convince them to hang up their robes and finally leave the group for good.” But no, to be fair, we don’t need a show that gives equal emotional weight to hate groups and anti-hate groups. That makes no sense. Television, especially this kind of television, which seems to seek to humanize the “struggles” of the people involved in this racist, horrible hate group, is one of the fastest paths to normalization. The KKK should not be normalized, not ever, but especially not now. As novelist Sara Nović tweeted, “Is it too much to ask that the KKK doesn’t get a fucking reality tv show”????? [all ?s my own] Didn’t we learn anything from Donald Trump?

“We certainly didn’t want the show to be seen as a platform for the views of the KKK,” A&E’s Rob Sharenow told The New York Times. “The only political agenda is that we really do stand against hate.” It’s hard to believe that the show won’t, at the very least, humanize people who do not need humanizing. But that said, I’m willing to reserve some judgement until I’ve seen it—because there is, and has to be, a way to talk about the KKK without normalizing it. Unfortunately, we are headed into a period where we might need to understand the KKK, and maybe this show will expose something about America that will actually help us to do that. Knowledge is power, after all.

However, while the show isn’t a knee-jerk reaction to the presidential election specifically—it’s been in the works for a year and a half—it does seem to be responding to a cultural movement that has recently come to a head. And again, while that’s not a new phenomenon, and nor is it inherently wrong, there’s something that feels so opportunistic about this show—and I, for one, resent any opportunism surrounding this national tragedy we’ve sleepwalked our way into.

Then, speaking of opportunism, there’s the Pantsuit Nation book. Again, this sort of thing isn’t particularly out of left-field. I have long been both wary and weary of blog-to-book deals (except The Smitten Kitchen Cookbook, which I love, and cookbooks generally, because cookbooks are great). Usually, these projects end up being lame gift books—their entire purpose for being is that you can’t wrap a link and put it under the tree. So you wrap the blog-to-book instead, and it gets one laugh when the bow comes off, and no one ever looks inside of it.

But the Pantsuit Nation book isn’t even a blog-to-book, it’s a secret Facebook group-to-book. Which, you know, hello modernity, I guess.

The founder of the group, Libby Chamberlain, announced her book deal in a post to the group, calling it “A book of YOU. A book BY YOU. A permanent, beautiful, holdable, snuggle-in-bed-able, dogear-able, shareable, tearstainable book. Your voices. Your stories. Our community. Our project. Our message of hope and change.” The book, as Chamberlain explained to The New York Times, aims “to amplify the collective voices of the women who shared their stories of overcoming or facing sexism, racism or xenophobia.” True to its roots, it will maintain the messy vibe of a Facebook page.

Many of those who commented on Chamberlain’s announcement—the Nation, as it were—and many who have written about it since, are not pleased.

Because honestly: how coarse, and ultimately, how sad, and actually, how disturbing to just go on as usual, cheeks pinched and teeth bared in what you think might still pass as a smile, with the commodification of feminism that so utterly failed us this year. It is wonderful to find a safe space online, and it is wonderful to share stories there. It is horrible for someone to get a book deal to copy and paste that stuff into a manuscript and slap a “tearstainable” cover on it. Not only is it horrible and cynical, but it’s completely fruitless. As Erin Gloria Ryan so eloquently put it at The Daily Beast:

“Feeling good about yourself isn’t the same as winning, and it isn’t the same as real power. A Dove commercial that doesn’t airbrush stretch marks doesn’t mean shit if women in Texas can’t get Plan B, if single mothers in Ohio can’t take time off to take care of their sick children without losing pay. A Facebook group all about privileged feel-goodery is actually bad if what it does is obscure what the new administration is already doing. People privileged enough to take real action against Donald Trump don’t need to be high-fived right now. They’re the ones who screwed up.”

My biggest qualm with both of these projects is that they seem to be trying to cash in on something painful—and not something just personally painful, but something culturally painful, something deeply serious—that I just feel shouldn’t be commodified. At least not yet. It’s a big cosmic “too soon.” I mean, let us mourn! Let us sit with the country we didn’t know we had for a little while before making us all watch a reality show about the KKK! There’s nothing inherently wrong with making money—and there’s nothing inherently right about it either—but particularly with the Pantsuit Nation book, it feels disrespectful to turn all this pain and struggle and despair and hope into something you can just buy. And the idea that these projects are a reflection of American culture today fills me with—well, I guess the same body horror that’s been coming in waves for the last month and a half. How about this: instead of shelling out money for half-assed reflections of our culture, let’s work towards making something a little better to reflect. 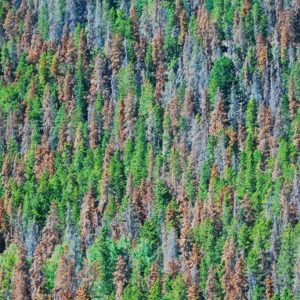 One summer, in college, I worked as a naturalist on a mountaintop in Aspen, Colorado. The mountaintop was a bustling place....
© LitHub
Back to top