A titan of finance sets his lawyer straight, over the phone: “ . . . I mean don’t ever say I want you to do something illegal I mean what do you think I got you for! I mean . . . holy shit where do you think we are over at Russia?” In our proud US of A, the rant continues:

These laws are these laws why should we want to do something illegal if some law lets us do it anyway . . . like did we invent this tax break we get with them? . . .did we invent we get to take off eighty percent for these intangible drilling costs? . . . these are these laws which you’re supposed to find out the letter of and then that’s what we do exactly the letter! Okay?

Sound familiar? Right down to the brokeback idioms and blithering run-ons? These days our President-Elect talks as if he’s still in middle school, bragging about how he’s duped the authorities and what’s more come away rich. He can’t conceive of business as anything more than a round of Monopoly; he ignores the human costs. “Real people,” the tycoon’s associate reminds him, have “worked their whole lives for miserable wages so they can finally retire on some miserable pension.” But the financier sees nothing beyond the gameboard.

If that sounds like a petulant child, in this case, it is. The exchange above isn’t the result of some Anonymous hack, bugging the Trump Tower offices; rather it’s in a work of fiction from 40 years ago. The protagonist is a Long Island boy in junior high. Eleven years old, the kid began his wheeling and dealing with the crap in the backs of comic books. Those ads, however, always include promises like Retire Before You’re 30! Soon enough, operating over the phone and yoking in an adult front, the preteen is trading in “financial instruments:” the stuff American dreams are made on.

The boy’s initials are “JR,” suggesting J.P. Morgan and other fat cats, and they provide the title for a 1975 novel by William Gaddis. For my money—and “money” is the first word in this profit-maddened text—it’s one of the two or three imaginative constructs that’ll outlast us all.

In its time, JR hardly went unnoticed. It won the National Book Award, and a few reviewers went so far as to call the author’s second masterpiece in a row. Number Two, however, had taken 20 years. Gaddis’ debut, The Recognitions, had suffered the sort of disregard that itself achieves fame, when the work so neglected turns out to be extraordinary. Recognitions, at just under 1,000 pages, tilted the scales of US literature. Back when Howl was still in draft, the novel celebrated angelheaded hipsters burning for an ancient heavenly connection; back when a few Parisians were still hammering out the term “postmodern,” it deconstructed the authentic and turned the real to a simulacrum.

In short, Gaddis brought off something prescient with both novels. Gathering speed thereafter, he published two more before his death in ’98, and most of a third posthumously; in ’95, A Frolic of His Own took home another NBA. Still, none of these speaks for the whole culture the way the author did with his opening one-two—and just now, when our ears ring with DT’s nonsense, JR’s voices have the greater sonority.

The ’75 novel runs somewhat shorter than its predecessor, and feels more intense: a knockabout drama in which everyone suffers bruising for the sake of corporate worth. “There aren’t any emotions at all,” claims Emily Joubert, one of the few characters who embody the story’s conscience, “it’s all just reinvested dividends and tax avoidance that’s all it is, avoidance . . . ” Yet this young woman’s eruption comes in a Manhattan tower of finance, where she’s initialing the documents that protect her trust fund. Joubert may have a job, she’s one of JR’s teachers, “just to have something to do, something alive,” but nonetheless she’s caught in the system. Her little acts of rebellion bristle with ironies, often hilarious.

But, “knockabout?” “Hilarious?” Such descriptions run counter to received wisdom, which terms Gaddis “Mr. Difficult.” Jonathan Franzen came up with the name, in a notorious 2002 essay for The New Yorker; he calls The Recognitions “the most difficult book I ever voluntarily read” and confesses he couldn’t finish JR. Franzen concedes the author’s gifts, but argues this novel isn’t worth the effort, and over the decade-plus since others have seconded the motion, among them most of the contributors to the New York Review of Books. Such criticism demands a response, if I’m going to sing the book hosannas.

The best art always has some quality of paradox, and JR proves challenging precisely for what makes it glorious. The novel unfolds without those resting-places we call “chapters,” and in text that’s almost all dialogue. Then too, conversation is handled in the European manner, with dashes rather than quotation marks, so that longer paragraphs require readers to track the shifts between someone speaking and the author’s exposition. This goes too for any exposition that functions as a chapter break, changing scenes and players. Throughout, the setting is always one corner or another of greater New York, and so the affect recalls a Warhol montage, shadows against an industrial wall. Yet these shadows say funny things, and their give and take proves bumptious. Often we listen in on a number of voices at once, plus phone interruptions. Joubert’s visit to the investment firm provides a good example. The woman’s outburst about the absence of emotion, about “avoidance,” comes shortly after her family lawyer, Beaton, reveals that her father has called, taking time from his Cabinet appointment:

Difficult? What’s difficult about bootlicking? Beaton’s working his tongue hard: yes, Mrs. Selk, yes ma’am. You get disconnected once and we fire every operator on the switchboard, yes ma’am! Zona Selk, readers learn in time, is another relation, with a controlling share of stock and a trainwreck daughter. That would be “Boody,” and this first introduction to the girl likewise reveals all a reader needs to know. With her joke of a name, her recurring scrapes with the law, Boody has to be another loose family nut, afflicted with parents for whom “there aren’t any emotions.” This same scene, in fact, provides corroboration. “I wouldn’t blame her at all,” declares Joubert, “carting drugs into Greece . . . ”

Beaton jumps in: no, this time the teen was carrying bombs of some kind. “We just got her out of Nepal and I think your father is beginning to . . . ”

“To be aware of Boody?” snaps Joubert.

Amid such barbed palaver—knockabout is just the word—even Beaton’s rapid-fire legalese (“ . . . appears advisable for tax purposes that this preferred issue paying six percent . . . ”) begins to sound pathetic. Everyone begins to look like a bug in a trap, their feelers going like mad. Joubert may enjoy a financial cushion, but she’s too smart to kid herself that she can make much difference. As for other better angels, as I say a few turn up on JR’s long list of dramatis personae. These however are all so strapped for cash that eventually, in one way or another, they latch onto the mysterious “JR Family of Corporations,” growing like a weed.

Therein lies much of the hilarity: people with no head for business, floundering in the clarified essence of business. The game is cutthroat, even a child can see that: “You can’t just play to play,” JR explains, “because the rules are only for if you’re playing to win which that’s the only rules there are.” But a child needs a front, an adult, and for his initial patsy (as the firm gets busy, he brings on more) the boy yokes in another of his teachers, a gifted contemporary composer and hence pretty much unemployable. This man’s brief tenure at the school provides the novel’s first three-ring circus, in which the musician suffers a breakdown, both in class and on video, over the pabulum he’s asked to present on Mozart:

And this loose-screw moment gets a screwball presentation; Gaddis puts the show on closed-circuit TV in the faculty lounge. There the principal is hosting his Congressman, even letting him park the Caddy in the schoolbus zone, while others drop in and out. Bu no one can find the switch to kill the feed, and before long a reader isn’t thinking of Warhol so much as of the Marx Brothers.

A rave-up like that, you’d think, would keep even Jonathan Franzen reading. Also anyone who sticks with it will pick up the verbal cues that identify most characters, and these often trigger wordplay. Once JR starts speculating in pork futures—“it says here we are friendly to bellies” —the expression takes on febrile life.

Such stuff amounts to classic comic relief; otherwise Gaddis conjures a gloomy vision. Even the breakdown during the music lesson exposes a school system itself all about “avoidance,” shying away from anything that might upset parents or Congresspeople, treating their young charges like cattle: “The function of this school is custodial. It’s here to keep the kids off the street until the girls are big enough to get pregnant and the boys are old enough to go out and stick up a gas station . . . ” And when the narrative moves to the locus of power, the HQ of the financial empire run by Joubert’s uncle, things really get bleak. The man’s a former Governor, always either barking orders or belittling, salting everything with racist slurs. Alongside sits Mrs. Selk, if anything more hellbent on getting her way. Their biplay (and tri- and tetra-play) echoes that of the kid trying to muscle in on their action:

The echoes resonate a long way, don’t they? To DAPL and Standing Rock, and beyond that to a Cabinet full of fat cats, selected for their slavish fidelity to the fattest. To DT and his inner circle, the whole country’s nothing but a Monopoly board—and unlike young JR, they know just what damage they’re doing.

No one in the new Cabinet, however, could make head or tail of a novel like this, and not so much because of its “difficulty” as because of its darkness. JR gathers the gravity of a black hole, and into this it sucks America’s childlike faith in the market. The story takes the market to calamity; the kid breaks his toys. So too, a recent online “group reading” in Los Angeles Review of Books drew repeated parallels to the Crash of ’08. By way of better, mostly the text offers laughter, filthy with humanity. The rest feels so inhuman, after all—except for the occasional redemptive glimpse of the transcendent, like a piece by Mozart, or a novel on the scale of JR. Consider this conversation between Joubert and her precocious student, after he asks if she’s ever realized, “everything you see someplace there’s this millionaire for it?”

— Just stop for a minute! she caught an arm round his shoulders, — just stop and look!

— At the evening, the sky, the wind, don’t you ever just stop sometimes and look?

John Domini has contributed several times to Lit Hub. His latest book is the memoir, The Archeology of a Good Ragù.

Let Grace Paley Inspire Your Creativity and Activism in 2017 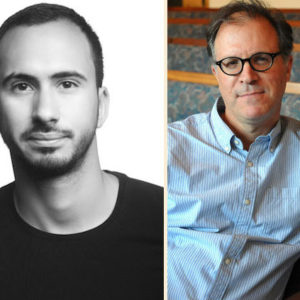 On November 8th, the world became narrower. How does this atmosphere bode for literature? The following dialogue between...
© LitHub
Back to top