Michelle Dean On Everything is Copy, and the art of Ephronology

I was only in a room with Nora Ephron once. Well, really, it was an atrium. A few years back, NYU’s journalism school had put her on a list of America’s greatest journalists, and both she and I happened to attend the reception. I was there just to watch, of course, so I got about as close to her as a nobody shoved to the back of a open-bar reception can get.

Pete Hamill was the master of ceremonies. (He was also on the List, but if you’ve been to more than one of these high-end journalism things you realize that everyone is happy to double up on honours.) Hamill is a very charming man; I suppose the selection was natural.

But among the things they gave Hamill to do, as master of ceremonies, was call the honorees in attendance to the stage. Most of the men got a simple, brusque name-reading, the implication being that their achievements spoke for themselves. Somehow, though, when Nora’s name was read, Hamill said something like: “And also here is her husband Nick Pileggi, a great journalist himself!”

What made this weird, and sort of remarkable, is that Nick Pileggi’s name was not on this list of the 100 Outstanding Journalists of the Last 100 Years. Hamill just brought him up because… well, I can only speculate. Maybe it was as simple as Hamill seeing Pileggi in the crowd after not seeing him in forever, and his brain hit the skids. Or maybe Hamill felt that some personal injustice had been wrought on Pileggi’s legacy by not including him on the list. (That is certainly a fair argument to make, since Pileggi’s deep reporting on the mob led him to write a celebrated nonfiction book that became the basis for Goodfellas.)

The point is that it was weird. There may have been some bygone, nicotine-stained era of man’s man journalism in which this remark would have seemed appropriate. That era is gone.

And I know I could have been imagining this. But I thought I saw Ephron react. It’s not that she did anything in particular, but the air changed. She didn’t quite look at Hamill, only moved her her eyes in his direction for a second, not quite making eye contact. Ephron was not a tall or imposing person, and as I remember it, she was dressed simply and elegantly, mostly in black. But she visibly shifted her posture. Then she nodded and smiled in a vague, distant way. It was a smile that had a lot of things in it, mostly not particularly nice things. I think all the nice things were probably reserved for Pileggi.

That was the first time I saw, for myself, that Nora Ephron was tough. Before, I had just thought she was funny.

Somewhere in the middle of the new documentary on Nora Ephron that will air on HBO March 21st, titled Everything Is Copy, Jacob Bernstein manages to get his dad, the Watergate journalist Carl Bernstein, on camera. This, in Ephronology, is a real coup, even considering the filial claim. Ephron was the kind of consummate charmer who seems to have left few real enemies behind her. She was of course very cutting, and even had a temper, but her capacity for friendship often seemed to overcome it. She often befriended people after first arguing with them. That, it seems, was how she wanted to do business.

Carl Bernstein, however, was different. “Above all, be the heroine of your own life, not the victim,” Ephron once said in a commencement address. But even a heroine needs a villain. Ephron and Bernstein married, in 1976, after a courtship she would call “no bed of roses” itself. He cheated on her when she was seven months pregnant with the couple’s second son. So he was the one on whom she sought revenge with Heartburn, one of the greatest acts of revenge to ever take the form of a novel.

There might be some world in which a Carl Bernstein type takes such a novel in stride and shrugs off the publicity and grants that bad behaviour sometimes deals a blow to public reputation. This is not that world. The Bernstein alter-ego in Heartburn is less malevolent than careless, but the humanity of the portrayal didn’t much matter. Carl Bernstein, as his son will show you, is still smarting from the blow, and perhaps not entirely self-aware about why it was dealt to him.

“I’m not good at making things up,” Ephron often told interviewers who asked, in her journalism days, if she’d write fiction. She was right. I suspect this was one of the reasons why some of her films didn’t work. I suspect it was also the reason why Heartburn did. Her gift wasn’t imaginative; it was perceptive. But most people don’t want to be seen in the way Ephron could see them. And they especially don’t want her to play back her mental tape.

At the screening I attended, Jacob Bernstein said the thing that surprised him, going back through his mother’s work, was “how many people she whacked.” I have wondered, reading and re-reading Ephron, if she always knew she was whacking them. The problem with being the child at the Emperor’s parade is that, at least at first, you don’t know why what you’ve said has made everyone stop and stare. You were only reporting things as you saw them.

A word on “everything is copy”: Like most writerly self-help mantras, it actually has a gloomy provenance. Ephron always attributed the phrase—really a kind of life philosophy, to her mother, the screenwriter Phoebe Wolkind Ephron.

Phoebe Ephron is actually one of the more intriguing characters in the Ephron family saga, apparently emerging fully formed as a wisecracking smartass from the Bronx in the 1930s. She married a somewhat dopey aspiring playwright in Henry Ephron—though as family legend had it, she asked to read his work before accepting—and swiftly made herself the brains of a husband-and-wife screenwriting operation in Hollywood. Before there was any such thing as the women’s liberation movement, she was focussed on professional success. She was not a declared feminist. “She merely was,” Nora Ephron said in the eulogy she delivered for her mother in 1971, “and simply by example we all grew up with blind faith in our own abilities and destinies.”

But Phoebe Ephron didn’t die a happy woman. Certain professional failures, Henry’s philandering, and most of all, acute alcoholism killed her by the time she was 57. But her long descent did not quite destroy her eldest daughter’s faith in her. Ephron liked to tell a story about her mother, on her deathbed, issuing a command: “You’re a reporter, Nora. Take notes.”

The thing is, the story of Phoebe Ephron—the suffering half of it, the alcohol part—only began to emerge in writing around the end of Nora Ephron’s life. Her most extended treatment of it appears in the essay “The Legend,” in I Remember Nothing, published in 2010. She mentions her mother coming to visit her at Wellesley for commencement. “I was terrified that she’d burst from her room into the halls of Tower Court and mortify me in front of my classmates,” Ephron wrote, “that she’d stagger down the hall banging and screaming, and my friends would learn the truth.”

This was a vulnerable thing for a person like Nora Ephron to say. Normally, after all, there was nothing that frightened her about “the truth.” The survival strategy of refashioning it all into a story, something you could tell later in a magazine or at a party, had usually been enough. Not this time. For thirty years she wrote very little on this particular subject, other than an essay about the myth of Dorothy Parker that, without actually mentioning Phoebe, cut pretty close to the bone: “All the early, sharp self-awareness turned to chilling self-hate.”

They say these things are hereditary. But Nora Ephron never melted down the way her mother (or Parker) did, in part because, as she often said, she had been very lucky. But also in part, I think, because she figured out that what had happened with her mother was something whose lessons would take years to discover. Maybe that was psychoanalysis, or maybe, before she started going under, Phoebe Ephron had managed to give her daughter a slight edge of self-awareness.

Towards the end of the documentary Jacob Bernstein catches this point about his mother, too, though he’s focussed on the way she concealed her illness at the end of her life. Nora Ephron, he says, only believed things were copy once she’d processed and dealt with them. She liked to tell people to get on with things, to get over it. But she also understood, I think, that there were things one could never get quite over. She just knew the difference.

Michelle Dean is a journalist, critic, and the recipient of the National Book Critics Circle’s 2016 Nona Balakian Citation for Excellence in Reviewing. A contributing editor at New Republic, she has written for the New Yorker, the Nation, New York Times Magazine, Slate, New York Magazine, Elle, Harper’s, and BuzzFeed. She lives in Los Angeles. Sharp: The Women Who Made an Art of Having an Opinion is her first book. 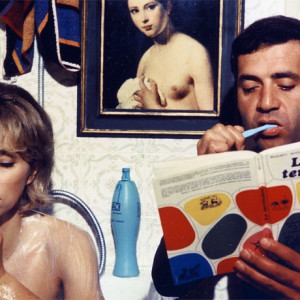 It’s not easy to choose only five books, so I made up my mind and decided to mention the five I can’t help reading again,...
© LitHub
Back to top