Why We Love to Be Haunted

On What Our Ghosts Are Really Trying to Tell Us

I used to live with ghosts in a house on Harvard Street. The house was three stories, with gingerbread-sided gables and a porch in need of rescue that seemed to cling to the walls. The house was across the street from the University of South Dakota, on Harvard Street. Although I don’t know why, it is customary in small college towns to name streets after Ivies. Maybe it was hopefulness, Harvard, Yale and Dartmouth Street leading to the University on the dusty prairie, in the town where high school students rode tractors to prom and the Ben Franklin five-and-dime persisted, even though the college-bound notebooks and packs of Extra gum were covered in dust.

It used to be a fraternity house. After my family moved in, my friends, children of the professors who lived nearby, told me stories of the debauchery in that house. They had brought in a goat, Rhiannon told me. “For, you know…”

I didn’t. But I nodded anyway.

But whatever had gone on inside the house during its fraternity years or before, we didn’t really know. All we had were the makeshift walls, the rickety fire escapes, the room in the attic that was now a kitchen, broken lattice on the eaves, bottle caps and broken glass in the lawn. When we knocked down the walls in the dining room that had been erected to provide more apartments, we found a lost shoe, a punctured inflatable floatie, boxer shorts, a baby shoe.

The first time I stepped inside the front door I was 13. I walked into the entryway, where muted sunbeams phantomed through the dirty leaded glass, I knew I had been there before. In front of me was a staircase. When I closed my eyes, I could see where it led—up and around to the long hall of the second floor. Then the attic. I knew the term déjà vu, of course. But this felt like more than that—that not only had I been been there before, but that I could feel whatever was coming. Opening the door of the house on Harvard Street had opened up a door inside me, and whatever was on the other side was familiar and terrible, because I knew that whatever would come, I couldn’t escape.

In his book Ghostland Colin Dickey attempts a unified theory of hauntings, tying the sense of wrongness that often pervades a home to the German word unheimlich, which means “not of the home,” “eerie and ghostly,” or “uncanny.” The haunted house, Dickey writes, is the encapsulation of the unheimlich.

The haunted house is precisely that which should be homey, should be welcoming—the place one lives inside—but which has somehow become emptied out of its true function. It’s terrifying because it has lost its purpose yet stubbornly persists. Neither alive nor dead but undead, the haunted house is the thing in between.

Houses, the places we dream, where we live our quiet and unattended moments, become an interplay between our lives and their architecture. The very walls reflect our lives—where we like to eat, where we like to place our flowers, where we want to rest. Make houses odd, Dickey argues, and you turn them into “puzzles that seem to demand some kind of response, riddles for which there is no obvious answer.”

Adolescence could be described in similar terms. It’s a time of seeing without knowing, experience without understanding. For all of childhood, life has just been existence without question. Now at 13, and caught between worlds, I saw enough to no longer be a child, but I didn’t understand enough to be an adult. I had all the pieces, but no clue how to construct the answer. It was easier to externalize the anxiety—easier to hunt for ghosts than to understand them as metaphor.

In the first section of the book, Dickey analyzes America’s most famous haunted homes—the House with Seven Gables, the Winchester Mystery House, the George Stickney House, and the Lemp Mansion. Without fail, Dickey discovers that the ghosts in the home are imported, some for money, but even more through necessity, a way to organize the haphazardness of life, tragedy and architecture. These ghosts, Dickey writes, are “A belief that in various ways, and for various people, gives an explanation and a meaning to experiences that can’t be explained away easily. A belief that can help mourn and give us hope.”

These too are the ghosts that haunt bars, restaurants, hotels, and brothels, the prisons, asylums, graveyards, parks, cities and towns that fill the rest of the book. In his travels Dickey meets a haunted prostitute and fame-seeking ghost hunters. He holds camcorders and listens to EVP recordings. But the ghosts he meets reside solely in the psyche of the people and places they inhabit. Often, these ghosts bear witness to a brutal past. Other times, they attempt to hide that same past. Ghosts warn, and they menace, and they make money. Yet each one “is simply an attempt to account for some scattered tidbits, some disconnected facts that don’t add up. We tell spooky tales and scary stories because the alternative—the open-ended chaos of the unknown—is even more terrifying.” Later, when writing about New Orleans, Dickey echoes this belief, noting, “Ghost stories, for good or ill, are how cities make sense of themselves: how they narrate the tragedies of their past, weave cautionary tales for the future.” Proof of the axiom that Milan Kundera wrote in The Unbearable Lightness of Being: “Without realizing it an individual composes his life according to the laws of beauty, even in times of greatest distress.”

The ghost I believed was haunting me was my aunt who died at 17. “Leave,” I thought I heard her telling me, “leave.” Up until 13, I had been homeschooled and raised in the protective world of Fundamentalist Christianity. My family and my God were all I knew. It makes sense now that I would conjure up someone to urge me to flee, it was both necessary and a betrayal, I had to make it come from outside of me before I could see that it was inside of me. My ghost stories were how I made sense of myself.

The ghosts of fiction also offer answers to our hauntings. Shirley Jackson, author of The Haunting of Hill House and We Have Always Lived in the Castle, is the subject of A Rather Haunted Life, a new biography by Ruth Franklin. In her history of Jackson, Franklin documents the interplay between the haunted and tormented subjects of Jackson’s writing and the torment and entrapment of her personal life with her husband, a boorish and narcissistic academic, who was constantly placing demands on Jackson’s time and energy. These tensions cause Franklin to describe all of Jackson’s work as “nothing less than the secret history of American women of her era.” And the ghosts that haunt Jackson’s work, Franklin writes, are representative of the “psychic damage to which women are especially prone.”

The homes in Jackson’s fiction are both an escape and a prison for the women who inhabit them. But they are oppressive not for their external apparitions, but because of the people who inhabit them. Constance and Merricat Blackwood, the protagonists of We Have Always Lived in the Castle, stay in their ruined home, once their prison, and in their madness find freedom. So too the protagonist of The Haunting of Hill House, Eleanor Vance, who is either possessed or possesses the ghostly house, would rather stay within its walls than flee. Perhaps she understands that she can never flee. The haunted are always thus. Jackson herself never escaped her house. She died at the age of 48, writing a book about fictional freedom.

It is no small wonder to me now that I was haunted in that house on Harvard Street. There were so many puzzles in my life at that point—my father leaving and then returning, the late night screaming, my mother’s heavy eye lids. And then suddenly, the absence of those things and, in their place, a home far away from where we used to live and, quite literally, broken—the rotting spindles on the porch, paint peeling like a rash. We lived for years looking at the lathe and plaster in the kitchen. Once, my leg fell through the floorboards while I was holding my little brother. He was sleeping against my chest. I cradled him there as I pulled my leg up out of the hole. It was scratched and bleeding. He didn’t wake.

It’s no wonder we are most haunted in our adolescence. We have all the pieces and none of the ability to put them together. Ghosts are an easier answer to the questions we face—why women cry in the night… why sometimes we can’t breathe.

Lyz Lenz has been published in the New York Times, Buzzfeed, Washington Post, The Guardian, ESPN, Marie Claire, Mashable, Salon, and more. Her book Belabored: Tales of Myth, Medicine, and Motherhood is forthcoming. She also has an essay in the anthology Not That Bad: Dispatches from Rape Culture edited by Roxane Gay. Lenz holds an MFA in creative writing from Lesley University and is a contributing writer to the Columbia Journalism Review.
http://www.lyzlenz.com/ 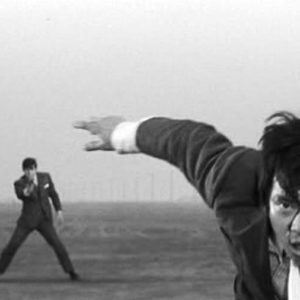 People always ask me why my novels are so dark. My standard response is that they’re dark because I am, but the reason...
© LitHub
Back to top