On the Enduring Popularity of a Bleak and Difficult Play

Why do theaters keep presenting Samuel Beckett’s Waiting for Godot? Somehow, this long, apparently dystopian play has become as perennial as The Music Man. Samuel French, Inc., which licenses it, reports that Godot will be professionally produced at least ten times around the world in the next three months, nearly 65 years after it first premiered. And the play’s cultural reach is even greater than these production numbers indicate. Already this year, Stephen Colbert appropriated it to skewer the health care debate, and Elon Musk named his nearly-impossible-to-build-but-finally-working tunnel driller after it. That’s the kind of longevity and cultural impact that most playwrights would kill for. So what’s Godot‘s secret?

The play is strong on its own merits, cultural zeitgeist aside. It manages to combine a specific tone and characters with an elusive setting and arc. From our position in the audience, we watch two men, Vladimir and Estragon, and listen to their dismal, circulatory debate about whether Godot will show up and what they should do if he doesn’t. While the men and their momentary visitors, Pozzo and Lucky, are distinct, nearly everything else is open for interpretation, from the set (post-Apocalyptic or wintertime?) to the costumes (former businessmen gone to ruin or vaudeville performers?) to Godot himself (God or . . . just some guy named Godot?).

And it’s always these same elements, pared to the bone. Because of Beckett’s demands, productions of Godot rarely change. And although theaters have ignored his dictates, what he wanted is what we most often see: four male actors, the dead tree set, the uncut dialogue, the gloom. Where Shakespeare’s words are endlessly adapted—cut up, re-worded, placed in new settings such as the controversial production of Julius Caesar at the Public Theatre’s Shakespeare in the Park this summer—Godot does not change to suit us. Among our own changing circumstances, it abides.

Luckily for Godot, although perhaps unluckily for us, existential crises, whether of humanity or of the individual heart, have not abated—and so despite the show’s stasis, we always see ourselves in it. Whatever we audience members bring to the performance, whether we’re thinking of the concerns of a dreary office job or a dying romance or, say, our elected official’s portentous threats of nuclear annihilation, Godot reflects and reveals our concerns back to us. It’s a little depressing to realize that humanity has changed not a whit in 65 years, I suppose, but there’s also perhaps a small bit of hope in seeing that we’re never exactly alone.

For much of my adult life, I didn’t understand this about Godot. I first encountered the play when I was a theatre major in college, lo, those many years ago, and read it grudgingly, having been told by my professors that it consisted of a maddening slog through the existential questions of life. After reading it, I felt, if anything, that they had been too kind.

With Godot, every part’s the challenging center of attention; there are no maids or butlers here. That torqueing, circular dialogue? A challenge. Keeping the audience interested, even laughing, when there are only two of you onstage for many long minutes? A challenge. Finding new life in a play that most people who sit in the audience will have some preconceived notion about? A big, meaty challenge.

One of the pleasures of being alive is to approach challenges, especially those that are just on the edge of our capabilities, and push ourselves to meet them. I’d call this feeling a kind of joy, and, for theatre people, Godot provides it. It’s a bleak show that reminds us of our mortality, but it’s also a tour de force of skill and passion by (one hopes) the finest actors around. The audience can sit through two hours of mutterings, abuse, portent, dread, and harrowing confrontations with mortality at least partly because the very aliveness of what is happening onstage is apparent. (Of course, we are not entirely fooled by even the most skilled performance: we know that that theatre is, ultimately, falseness. Let Estragon and Vladimir, Lucky and Pozzo rage: we understand that they’ll be laughing it up in their dressing rooms in a bit. This helps.)

Actors are always looking for that role that will make them, somehow, immortal, and, as audience members,  we love to watch actors strive for transcendence. But, of course, the joke’s on all of us. Godot won’t give an actor immortality. No theatrical performance can. Its very nature is to be ephemeral. The actor, and the audience, only have the performance in those minutes in which it is given. Like life itself, it slips by before we can freeze it.

That’s one of Beckett’s main ideas in Waiting for Godot: you only live once. He doesn’t mean it as a slogan or an excuse for bad behavior. He means it as a warning, or possibly a curse, and we keep showing up to hear it. Take this passage, when Vladimir says to Estragon, about Godot’s imminent arrival: “He said Saturday. (Pause). I think.”

“I must have made a note of it,” Vladimir says. The stage directions tell us that as he looks for the note, he “fumbles in his pockets, bursting with miscellaneous rubbish.”

Here’s another Beckett reminder: this is what’s ahead for all but a few of us. I know exactly what he means, because I’ve seen my loved ones decline, and I’m entirely too aware that before too long, I’ll most likely be fumbling around in miscellaneous rubbish, too.

Momento mori, though, is not the end of what this play gives us. It points to more than just the despair that we know in our bones; there’s also an endurance we recognize. At the end of the play, Estragon says, “I can’t go on like this,” and Vladimir responds, “That’s what you think.” What Vladimir means—what Beckett meant, writing just after the end of World War II—is that we’ll go on because that’s what we humans do. It’s not beautiful or hopeful, necessarily. It just is. At the end of the show, Estragon and Vladimir famously don’t move—but they don’t die, either.

There’s pleasure in that for the audience, as odd as it may seem. To watch Vladimir and Estragon go on not going on is a kind of catharsis. Catharsis most often happens when we see actors expressing emotions that we feel simultaneously, and that happens in this play. For long moments, we sit while they stand, all of us waiting together. But then, Estragon and Vladimir are left to wait forever, lacking a resolution, while the rest of us get to leave their dour wasteland and pass back into our own lives. They don’t move, but we do, to our relief.

It’s enough to keep us coming back. More than half a century on, the play still has a gloomy magic. We still hear the lines of universal pain, still feel the tedium of existence. Which brings me to my pet theory, the truest reason why I believe it endures: we return to Godot at least partly to be able to walk out of Godot. It’s very grim, but it’s also finite. Our lives may be too, but we rarely enjoy the end of them. However, Godot ends, and we leave, perhaps moved or changed, but definitely free. We’ve slipped in and out of an apocalypse that feels nearer every day on the play’s coattails.

Putting on the show, or sitting in the audience of a production of it, feels like whistling past a graveyard: we do it because, damn it, we’re alive and we can. What joy.

Shannon Reed is a frequent contributor to The New Yorker and McSweeney's Internet Tendency. Her work has also been published in The Washington Post, Guernica, Longreads, and Vela, among others. She teaches at the University of Pittsburgh and is at work on her first novel.
http://www.shannonreed.org/ 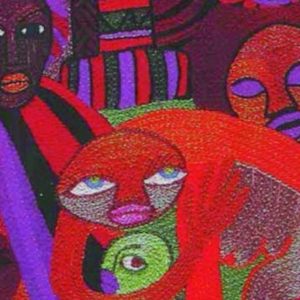 In honor of Women in Translation month, we asked translator David Brookshaw to share a bit about his experience working on Paulina...
© LitHub
Back to top