Why Look at Art When You Could Watch TV?

People talk about being “right brained” or “left brained” as if you can’t be both. Such categories, of course, are not only cognitive but cultural, the constitutive divisions of Western philosophy—mind and body, vision and language, feeling and reason, image and word—having long since migrated into our everyday professional lives. We take it for granted, for instance, that the visual arts will be taught in one building while the humanities (what used to be called belles lettres) are taught in another. Or that the editorial department of a publisher will be housed in one office and the design department somewhere else. People who are good at accounting are not supposed to make good poets. Nor are philosophers meant to tell stories about real people. Among fiction writers, especially, there seems to be an unshakeable tendency to pit the abstract against the tangible, so as to do away with the first. The division between “critical” and “creative” is now so entrenched at an institutional level—each professor assigned a tag, each class allotted a domain—that it can seem to students as if such categories were pre-existing in nature.

In his own time John Berger was certainly one of them. Throughout his boyhood he experienced what he would later call a “divided loyalty”: a powerful inner tension between the world of appearances and the world of concepts. His first journals were full of sketches and poems, side by side, in equal numbers. In his twenties he made his money putting words to paper, but had been trained to put paint to canvas, and he never gave up drawing. “As the difficulties of thinking and writing became my primary conscious concern,” he said, “my primary reality became the visual one.”

Reviewing painting both harnessed and exacerbated this division. The literary critic can sidle up to her object of study: the two share the same medium. The art critic, by contrast, is always to a certain extent operating synaesthetically, using language to evoke and evaluate what is fundamentally non-linguistic. When Berger gave up art criticism his early fiction stalled precisely because he seemed unable to corral his unusual double talent into the traditional forms of literature. It was as if he was standing on one leg rather than walking with the two he had.

Then, in the early 1960s, he began to work in television. The experience proved definitive. Television not only helped him pay his bills and expand his influence; it immersed him in technical methods whose intrinsic means of composition reconciled the very schism he had struggled with. By writing scripts with a special awareness of how his voice-over would be paired with the image-track, his skill with words could be put in dialogue with a new visual dimension. Image and language formed a fresh circuit on the screen: early television was often called “radio with pictures.”

Television suited Berger in another way. As a presenter he had presence. Arriving in leather and zips at Lime Grove Studios in West London, he was handsome and magnetic and could speak in a direct way to a coveted new audience: the so-called “average man.” When the BBC’s monopoly was broken up, and Granada Television formed, he hosted two shows for the network, Drawn from Life and Tomorrow Couldn’t Be Worse, in which he talked to ordinary people about art. Later in the 1960s, he worked closely with Michael Gill (the director, subsequently, of Civilisation) to make special episodes for Huw Wheldon’s influential arts magazine, Monitor: one on Léger and another on the postman-architect Ferdinand Cheval, both filmed in the south of France. In other episodes Berger would be asked to share his thoughts on painters of the Western canon, from Bellini to Picasso.

At the New Statesman Kingsley Martin had been his mentor; at the BBC he had Wheldon. An imposing Welshman and the “philosopher king” of British arts programming (he was later knighted), Wheldon encouraged an impressive roster of young intellectuals to embrace the medium. “I fantasized this notion,” he later said, “that if Freud and Marx and Darwin lived in the 1950s and 1960s, instead of the 1850s and 1860s, we would have had an occasional television series from them as well as books.”

Television suited Berger in another way. As a presenter he had presence. Arriving in leather and zips at Lime Grove Studios in West London, he was handsome and magnetic.

Wheldon’s entire philosophy, though, derived from the axiom that television, when successful, was wholly different from a book, that it should instead represent (his motto and mantra) “an individual and indivisible marriage of word and picture.” The workflow he supervised—scriptwriting, drafting shot lists; then filming, selecting, cutting, assembling, reassembling, and dubbing—was laborious, but allowed for new experiments to flourish. The open arrangement proved especially favorable for art critics. What had been a near-timeless practice for art historians—to lecture in front of a slide or painting, drawing a group’s attention to this detail or that—took on new technical life. “I have often been puzzled as to why the painting, even in monochrome, seems so vivid on television,” Wheldon said at one of his lunchtime lectures. “Perhaps the actual act of scanning, invisible to the naked eye, is in some way energizing the otherwise so still, still picture. It is uncompromisingly not the picture. It is undeniably a reproduction, but a reproduction like no other.” If the program was successful the result was a preternatural unity. “It is as if the words are in the picture; and the picture itself speaks through the words of a man who cares for nothing during that time but what is, and only what is, relevant to that picture.”

Through his work for television Berger became creatively conscious for the first time of a more general possibility—what he called the “speaking image.” He realized the idea of his divided loyalty was false—and, what’s more, that it was precisely by moving between forms, whether materially or imaginatively, within the same work or from work to work, that his disparate talents could most fruitfully find expression. (Tellingly, Berger’s best-known polemic, Ways of Seeing, is both a TV broadcast and a book, the second adapted from the first.) The expanded media environment of the postwar years was thus doubly formative: it raised the subject not only of cultural democratization, but also of media translation and difference. By making television programs about painted or sculpted artworks, critics such as Berger faced the question on an everyday working basis. It was a question, in turn, they often made central to their programming.

Berger’s first television appearance, for example, occurred alongside Kenneth Clark as part of Clark’s ATV Midland series Is Art Necessary? The episode was predicated on a question: Could painting still fulfill a popular purpose in the age of mass communication and modern art? During the live broadcast (which remains essential viewing for those interested in the Berger–Clark relationship), the pair discuss a trio of images: Picasso’s Guernica, a beach scene by Guttuso, and a printed advertisement for Guinness.

“Several forms do nonetheless remain hard to explain to the average man,” Clark says of Guernica. ‘I mean, this can have an impact on an ordinary person but it cannot be popular, it can really only be understood by people who’ve trodden the long hard road of modern art, don’t you think?’

“Yes, yes, yes, possibly,” says Berger. They move to the Guttuso painting. The broadcast cuts between the two men and close-ups of the painting as they look at it. What they say becomes an inquisitive frame around what we see.

“Guttoso is a Communist,” Clark remarks. “What difference does that make? Why do those painters who are endeavoring to bring back storytelling in art belong either to the communists or to the left? Is that because they seek to make people think a certain thing?”

“Yes,” Berger replies, “as soon as you have this purpose which is shared by both the likely public and the artist you’ll begin to get communication. In the West, of course, the only art used for a purpose is commercial advertising.”

Programs like these were self-reflexive, combining filmic representations of the art in question with conversations about what it meant to film art, and what art could do or not do in the age of film. Technically, they moved on two levels: image and sound. The production team would be tasked with visually conveying a painting, usually through an establishing shot of the whole work followed by close ups strung together through either panning or cutting. Meanwhile a second aural layer added sound and language to the artwork’s silence. As Berger later noted in Ways of Seeing (the book, not the program): “When a painting is reproduced by a film camera it inevitably becomes material for the filmmaker’s argument . . . The painting lends authority to the filmmaker. This is because the film unfolds in time and a painting does not. In a film the way one image follows another, their succession, constructs an argument which becomes irreversible.” 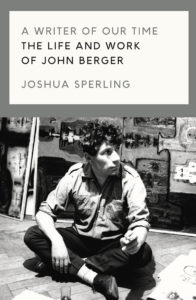 From A Writer of Our Time: The Life and Work of John Berger. Used with the permission of the publisher, Verso Books. Copyright © 2018 by Joshua Sperling.

The Showgirl Who Discovered Lolita

Most days, on holiday in Cornwall, the family walks to the beach. A path drops steeply, and either side wheatlike heads of wild...
© LitHub
Back to top
Loading Comments...