Why I Don’t Write About the Women in My Family

It is a fact universally known that in Lima, if you are a lady of beauty, you are likely to be a whore. I learned this when I was around 13, and my mother was obsessed with me being a lady of the night, too. She liked to check my pockets to see if I had extra money, money I couldn’t account for, a domestic IRS of my little, never-been-kissed vagina. But I digress.

I’ve been wanting to write about the women in my family for some time, but haven’t known where to start. I’ve always located them in a 19th-century rural world of dusty roads and wooden carts, like the ones carrying the 13-year-old prostitute Eréndira and her abuela desalmada in the Gabriel García Márquez story. Their Peruvian lives ooze a vague Vargas Llosa air, but the places they hailed from would have been irrespirable for his bourgeoisie. Melchora, my great-grandmother, was a native of Huánuco, a small village at the center of the Andean plain, a yellow world trapped between jungle and mountains. She couldn’t read or write, though it really didn’t matter; she spoke Quechua, and Quechua is a spoken language—its real life exists between mouths and ears, though it can be transcribed. Melchora loved going to the movies and yelling at the screen, especially at the villains: You are as ugly as your deeds! Melchora married an Irishman, Byrne, who beat her frequently and was drunk all the time. Eventually he left, and Melchora moved to La Victoria, a shoddy neighborhood in Lima, along with her two daughters, Olga and Ana, and a retarded little boy, Pepe.

Ana was the prettiest: by the time she was 12 a line of suitors had already formed in front of her. Men came to the house and offered their charms and gifts: platters of carne seca, furniture, ham, jewelry. Ana loved dressing up and dancing. She was wispy at the waist, she had wide Bambi eyes, and she loved getting dolled up in capri pants to dance boleros at the Lima clubs. Sometimes she wore jasmine in her hair like La flor de la Canela, a bolero heroine, the Madonna of the Rímac. She enjoyed the vanity of the temptress; she had fun with it.

“I’ve been wanting to write about the women in my family for some time, but haven’t known where to start.”

Once a young man came to visit the family and impressed Melchora: he was well-spoken, and successful in the jewelry business. He was very short, not particularly handsome, and Olga didn’t like him one bit. She assumed he was coming for her sister, but Ana wasn’t staying much at home; she would disappear for days in a row, while Olga took care of little Pepe. One morning, when Olga was getting ready for school, Melchora told her she couldn’t afford to return the gifts and she had to marry Jorge. Olga Byrne left the school and the house to marry my grandfather, Jorge Washington, absurdly named thus because, even though he was Peruvian and his father owned an anarchist newspaper, he was born on the Fourth  of July. Ana was not planning on returning any gifts. She left school and moved out to the Rímac neighborhood, where she started seeing a man no one knew. The transition from gifts to soles must have happened at some point, when she had to distribute the earnings, and he became her pimp.

One night, on the way home after the bolero club, he began beating her in the street. She pushed back, took off her pumps, and tried to hit him with the heel. He went on beating her and she kept yelling but people in the Rímac were used to having their night air sprinkled with girls’ screams. He pulled her by the hair down the block as she crawled and cried for help. He kicked and a part of her would move, stimulus and response, like a question and answer or a body spasm. At some point she didn’t move anymore and he tied her body to a wooden cart, a carretilla, for everyone to see. I see him angry and euphoric, riding her dead body on the street and yelling puta de mierda. He did this till dawn, perhaps drunk. He was still babbling puta at the air, or he went into hiding; versions differ. Her body was found naked in broad daylight, rotting in the Rímac river air. Someone found the broken shoes and gave what was left of them to Melchora. She burned them.

Ana had two children who went to live with my grandmother. One of them was apparently my mother. She was careful to destroy all photographs of herself as a child, so nobody would notice the resemblance.

Pola Oloixarac will be in conversation with Elaine Castillo, Heather O’Neill, and John Freeman at the Bay Area Book Festival on Sunday, April 29th. Tickets are available now.

The preceding is from the new Freeman’s channel at Literary Hub, which will feature excerpts from the print editions of Freeman’s, along with supplementary writing from contributors past, present and future. The latest issue of Freeman’s, a special edition featuring 29 of the best emerging writers from around the world, is available now.

Can James Comey Write? 13 Passages From His New Trump Book 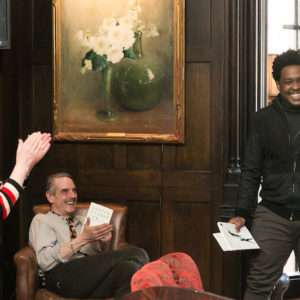 Danez Smith Wins the $20,000 Four Quartets Prize, Calls Their Mother I have always associated Friday the 13th with everything unlucky and ominous. But, to my surprise, it is a near-perfect,...
© LitHub
Back to top
Loading Comments...