Why Does Literature Have So Little to Say About Illness?

Meghan O'Rourke on the Need for More Representation

I got sick so slowly it took a long time to realize I had a disease. I had returned from a book tour that to find that my limbs felt leaden, as if they were made of sand. I lay on the couch, trying to persuade myself to walk across the room to get a glass of cold water. Electric shocks—like invisible shrapnel—tingled and sliced over my body, and the nerves in several patches of my back constricted and burned as if keeping time to chaotic music I couldn’t hear. I was finding it hard to think or read. I no longer turned to books hungrily, as a way of assuaging existential loneliness or as a source of pleasure. Strangely enough, at first I didn’t think I was sick: I thought I was failing to write. Eventually that feeling swelled into a conviction that I was a fraud—that I wasn’t really even a person. I’m not myself, I kept thinking, I’m not anyone.

This may—this must—sound strange. But I think it took me almost a year to understand that I was in fact physically ill because I’ve always looked to literature to instruct me about life. And the literature of illness remains remarkably impoverished—especially when it comes to describing chronic illness. I had never read about anything like what I was going through, with its periods of extreme fatigue, pain, and confusion, lifting for a few days, then returning with debilitating force. (In addition, whatever I had was hard for doctors to detect, which made it easy for others to dismiss.) Ultimately, it turned out to be a cluster of autoimmune diseases triggered by an undiagnosed late-stage Lyme disease infection.

As long ago as 1912, Virginia Woolf, who suffered from migraines, mourned the fact that literature has so little to say about illness in “On Being Ill,” which remains one of the best essays about illness and the sick body:

Considering how common illness is, how tremendous the spiritual change that it brings, how astonishing, when the lights of health go down, the undiscovered countries that are then disclosed, what wastes and deserts of the soul a slight attack of influenza brings to light . . . it becomes strange indeed that illness has not taken its place with love, battle, and jealousy among the prime themes of literature.

What’s astonishing is how true her words remain. There is, of course, the notable exception of the literature of A.I.D.S.—a literature of witness forced into being by the political inaction, stigmatization, and profound silence surrounding the epidemic. Yet we still have few novels and poems, as Woolf put it, of “typhoid and fever”—let alone of what are coming to be known as “invisible illness” such as autoimmune disease (which affect women disproportionately). To have an invisible illness is to remain marginalized by indifference—political, social, and yes, even literary.

“The literature of illness remains remarkably impoverished—especially when it comes to describing chronic illness.”

Why, when so many neglected aspects of human experience are being filled in, is chronic illness still so underrepresented? For one thing, it can be hard for the ill person to write in any sustained way; her life has exploded into pain, confusion, self-care, a quixotic search for panaceas like medicinal mushrooms. I found myself able to write only one line a day for many months. For another, the sick person lacks a tradition of illness writing to invoke, to turn to for for guidance, support, inspiration. When your world has exploded into uncertainty, having models helps. More important, chronic illness is anti-dramatic. It creeps upon you and systematically ravages your body, but it does so subtly, over time, stealing your voice a whisper at a time. It is hard to put its realizations, the sense of living with a life sentence that steadily drips away, onto the page. If one of the worst aspects of such a disease is chronicity—the sense of being dead while alive—how does one write that, when writing depends on drama, on sudden bursts of insight? Illness is threatening to our peace of mind, and illness that persists is not only threatening but monotonously threatening.

This is what I was trying to get at in my poem “What It Was Like,” which, with its abstract title and simile was meant to nod at the fact that illness can’t be authentically represented:

Blurry figures move in the rooms around you.
Someone cooks a Christmas feast. Another buys
complicated, precise plastic goods,
distributes them around the house.
The past opens into a lamp, a bee colony,
a book about mitochondria under attack.
Your green mind is an ocean you can’t enter,
sleeping in the bed hours each day.
You want to be alone in the deep,
the spiky sea urchins drifting along the floor,
the fish starting and shivering, the reef fading.
Instead you’re like the dead in deadpan.
In the subway the billboards ask
Did I really die? The snow on the sidewalk
greying. The buckets of footsteps gone.
You keep saying, this is my hand,
it hurts, please take it away.
Hating and wanting in equal measure,
jealous of the others’ human time,
the way their bodies work:
cells dividing, cytokines quiet.
Not yours. You stare at the ceiling,
eating Superfoods, taking pills, rubbing
your liver with castor oil,
spooning down maca and nettles.
Notebook pages scrawled with the facts:
the what-went-wrong-and-how, the police
searchlight squall of pursuit, the verdict
always about to be delivered.

Most important, though, the experience of illness is underrepresented because it is so troubling to the healthy, who want to look away from the mortal news it brings. As Woolf puts it, beautifully, “literature does its best to maintain that its concern is with the mind; that the body is a sheet of plain glass through which the soul looks straight and clear.” In Paul Zweig’s memoir Departures about living with lymphoma, he captures his poignant new awareness that when we are healthy we move through our days steeped in “the lie of endlessness,” a lie no one wants to let go of:

Normally we live in a double sphere of consciousness: a near shell reverberating with needs and hopes . . . and a far, attenuated hood of thoughts and projects which spin us years into the future, where we pretend that there is time.

It is the lie of endlessness.

Then, too, we talk about illness in very simplistic narrative terms. One reason I didn’t understand that I was sick was that I’d been taught that when you get sick, you fight it, and you get better, or you succumb. For that reason, one of the most wonderful pieces of writing about chronic illness I read is Alphonse Daudet’s In the Land of Pain—which is, technically, a failed project. Daudet, once a highly regarded 19th century novelist, is now primarily remembered for his notes toward a book about the pain and trauma of living with syphilis. (He contracted syphilis at 17 and died of it at 57.) He never finished the book; what we have are his notes, urgent missives from a mind that only intermittently felt able to describe pains so severe “my foot pumps up and down like a knife-grinders.” “Sterility,” Daudet writes, “is the only word that gets close to describing the horrible stagnation into which the mind can fall.” He articulates movingly the lonely truths of the body: “Pain is always new for the sufferer, but loses its originality for those around him. Everyone will get used to it except me.”

Having set out to write a book about illness, Daudet ends up questioning its very premise: “Are words actually any use to describe what pain . . . really feels like? Words only come when everything is over, when things have calmed down. They refer only to memory, and are either powerless or untruthful.” Woolf similarly pronounces illness an essentially solitary experience: “Here we go alone, and like it better so,” she writes, even as she mourns “the poverty of the language” that has “no words for the shiver and the headache.”

Like them, I found myself thinking it was impossible to bridge the gap between the sick and the healthy; it was impossible to represent illness directly, frontally, by transcribing its “contents,” as it were. Instead, I came to think, illness can only be represented through formal disruptions—through fragmentation, through a rejection of metaphor, through a denunciation of techniques like closure, or the discovery of a new vocabulary. The literature of illness, it seemed, had to embrace aesthetic failure—a feeling that drove me to write two fragmented lyric essays that withhold a conventional kind of conclusion from the reader, a project in which I was, oddly, almost hoping to fail.

It’s true, as Daudet says, that words aren’t of “use” to the ill person: They can’t capture pain. But words help us in a subtler way—they save us from the isolation of illness and mortality. I don’t mean anything as reassuring as “they make us less alone” (they don’t, really). But they do give form to an experience that is otherwise shapeless, and in so doing they make us less estranged from ourselves. Writing shapes us even as we try to shape it. In writing about illness I found myself changing—I was trying to capture the experience, but it was capturing me. I no longer felt that “I wasn’t myself” or that I wasn’t a person. I felt I had become, instead, a person who happened to be sick, with news to bring from what Susan Sontag called “the kingdom of the sick” in her essay Illness As Metaphor. It is news we need: we will all hold “dual citizenship,” she points out, in the realms of the well and the unwell.

Life is an ongoing detonation of the idea that we have control. My inability to voice what I couldn’t understand, my search for words that weren’t there, was a kind of schooling. In one essay I wrote, “The sick body is always having speech seized from it”—meaning by others who don’t listen. But the sick body also seizes speech from it itself. Seizing speech back, even fragmented, impoverished, “useless” speech—well, that remains the task of the writer. After all as Virginia Woolf’s mother—a nurse—once wrote, “There is no limit to a sick person’s imagination.” There are features of illness that still need explaining, that might help us recognize illness for what it is (a painful, monotonous truth), that might materially affect our bloodless debates over healthcare. We need good metaphors to replace the bad metaphors that lead us to psychologize illnesses we don’t understand. The more representations of illness there are, the less it seems an individual sentence, and the more it becomes a human one.

Meghan O'Rourke is the author of the collections Halflife and Once, and a memoir, The Long Goodbye. A former editor at The New Yorker, she has served as culture editor and literary critic for Slate as well as poetry editor for the Paris Review. Her poems and essays have appeared in The New Yorker, The Best American Poetry, the New Republic, and Poetry, among others. The recipient of a Guggenheim Fellowship, a Radcliffe Fellowship, and other awards, she lives in Brooklyn. 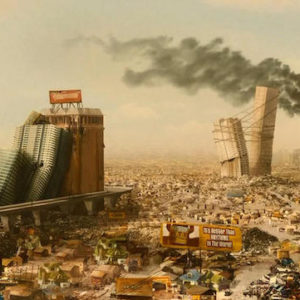 Sleepless thanks to jet lag, having just returned to New Orleans after a month in Paris last summer, I unthinkingly described...
© LitHub
Back to top