On Neocolonial Guilt and the Erasure of Women's Labor

Our baby was turning one. This was a perfectly predictable milestone which felt, all the same, like a testament to the miraculous power of species survival over emotional chaos and logistical incompetence. Somehow, we had all come through the year intact. A celebration was in order.

I baked a carrot cake and frosted it with cream cheese, cut dripping chunks of watermelon, and tied a helium balloon to the arm of the high chair. I did these things with eager sentimentality, thinking that just as romantic love spends itself in sex, this maternal love of mine came out in the icing of cakes and the scrambling of eggs and the straightening of covers. I worked at other things so I could make money to pay others to do these tasks, I mused, only to snatch them back again in random spasms of love.

My husband, Tom, took a long lunch so he could be home. There would be no other guests—just me, Tom and Xiao Li, the young woman who’d worked in our house as an ayi (nanny) since Max was born. We lit a candle and sang “Happy Birthday” to our first child, for the first time. Max sat straight, glancing from face to face and resting his plump forearms on the high-chair tray. He didn’t understand, but he liked it. He approved of the guests—his three favorite people. He crowed over the leaping candle flame. He gobbled watermelon until his chest was sticky with rose-colored juice. Tom crouched and hovered, taking pictures from every angle.

When the time came to blow out the candle, I held Max’s dimpled hand and whispered his wish into his ear. We had been one flesh, we had lived and almost died and gone crazy together, and now I wished on his behalf because he had no words.

I blew the flame away. Max clapped along for company.

The birthday was finished; another year opened before us. Tom rushed back across Beijing to his office. I laid Max down for a nap. Xiao Li swept up the crumbs and stored the leftover watermelon in the refrigerator. While Max slept, I picked up the camera and flashed through the pictures. That’s when I realized that Tom was missing from every frame.

It happened fast; nobody was paying attention. At least, I wasn’t paying attention. Maybe Tom had hoped I’d seize the camera and shoo him into the frame, or that I’d ask Xiao Li to snap a few shots of our family, battered but joyful, posing behind the birthday cake.

But I hadn’t. The pictures depict me, Max, and Xiao Li. This makes them awkward. We never framed them. The images were not planned, nor what we particularly wanted, but in retrospect they contain a certain documentary truth. That first year, in my memory, was populated by me, Max, and Xiao Li.

She wore a T-shirt and cutoff jeans, and gamely stuck a sparkly party hat on her head. While Max smeared cake over his cheeks, she squatted at his side and giggled. She was beaming that day.

And Tom—his face is not captured. He was there and not there. Making it all happen, but absent from the action.

If you want to see the ambivalence that pervades domestic labor, check the photographic record.

After that, I started angling my camera to crop Xiao Li out of photographs. I’d always balked at posting pictures on Facebook or emailing them to family if they depicted Xiao Li. I was embarrassed to admit she was there. I didn’t want to advertise the fact that we hired other people to do our housework, that we didn’t clean up our own messes, that we lived in neocolonial comfort with a locally hired domestic underling. Nor was I keen to admit that I was, perhaps, not a fabulously competent artist and mother who managed to do it all.

Besides, Xiao Li’s presence diminished my newfound sense of commonality with far-flung friends and family. I’d been a foreign correspondent for most of my adult life. The travel, triumphs, and traumas of this existence were alien events to the people I loved. I couldn’t discuss with my cousins or childhood friends the maddening campaigns to get an Iranian visa, or the weirdness of getting drunk on a winter morning with a killer in the Caucasus, or the crushing loneliness that filled my gut when I woke up in a hotel room and couldn’t recall what country I was in.

I could, however, chat happily for hours about the constipating effects of applesauce on infants or the travails of flying with toddlers. Parenthood had furnished me with something I hadn’t even known I’d been missing: a major life experience in common with my loved

Except there was Xiao Li, making it—making me—weird all over again.

As I began to exclude her from the pictures, I realized that most of the families I knew seemed to do the same: my former colleagues, my neighbors, the parents I befriended through our apartment’s baby group—I seldom saw any pictures of the nannies.

They all said things like “Xi Ayi is like a member of our family.” That sounded cozy and loving, as if the ayis were not laborers, but blood relatives or volunteers. But pictures don’t lie. If you want to see the ambivalence that pervades domestic labor, check the photographic record.

Check it on both sides, too. Because there’s something else I’ve realized: the nannies exclude their bosses right back.

We employers pretend our polished existences are the natural result of our work and excellence—not the fruit of another woman’s labor.

Xiao Li and the other neighborhood ayis liked to take the toddlers to the indoor playground across the street. This was one bit of childcare I was delighted to outsource. I hated the cocktail of boogers and hand sanitizer and drool slicked over contraptions of plastic and rubber, the wild screech of lisping nursery rhymes from mounted speakers, and the pressure to act nonchalant when some hulking seven-year-old clawed Max’s face or pushed him off the slide for sport.

Xiao Li at least pretended to enjoy the experience. Max was sincerely pleased by the place. And I certainly relished the empty apartment. Everybody won.

Upon their return Xiao Li would pull out her phone and flash through the photos: Max belly-down on a water bed, studying fake fish through translucent plastic. Max, who could not yet jump, perched in puzzlement upon a trampoline. Max laughing helplessly as balloons flew around his head.

She couldn’t send the pictures to me. She didn’t have email, and I didn’t have a smartphone. But she carried them around with her, this growing dossier that documented my son’s days. These were memories snapped out in the world and away from me—or at home, when Tom and I were gone.

I never knew why she took so many pictures of Max. Did she look at his picture at night or on the weekends? Surely not. I mean, surely not, right? Maybe she was just playing or passing the time, or giving herself some insurance in case she was asked to justify the hours or prove her devotion to the child.

I wondered whether she showed the pictures to her daughter or husband, or displayed them to her family when she traveled home to Hebei. These questions were idle and unanswerable.

Every nanny I’ve known has taken endless pictures of the children she tends and the rooms where she works. Whenever I’m handed a phone to look at a picture of my child, I realize it’s one of hundreds in a long chain stretching off in both directions.

Other pictures are clearly not intended for employers’ eyes. I’ve seen selfies of nannies posing in bedrooms; throwing parties in their bosses’ homes during vacations; borrowing their clothing—posing, always posing. The employers themselves are perpetually absent from the pictures.

We take pictures of everything except for one another. I guess there is fantasy on both sides. The nannies pretend they live in these comfortable homes and mother these plump babies. Perhaps they sometimes allow themselves to play dress-up—not only with the clothes and the rooms, but with the children.

We employers pretend our polished existences are the natural result of our work and excellence—not the fruit of another woman’s labor. The rooms are clean because somebody else cleaned them; the kids thrive because there’s an extra adult around the house. It takes a village, and damn it, we’ve hired one. But nobody wants to say that, not straight out like that.

We all want to pretend it’s not a job, it’s not about labor and cash and schedules. The employment relationship is the only reason we coexist in these rooms, and yet we treat it like an inconvenient, even nasty, truth—the first thing we’d like to crop from the picture.

I was leaving Xiao Li outside the frames, but I didn’t feel good about that, either. I didn’t like pretending that she didn’t exist. Her stories and songs and smiles are planted in my child’s mind forever—how could I excise her physical self?

I had spent the past year thinking that motherhood had vanished me from the wider world. How could I lament my own disappearance—only to erase another woman? 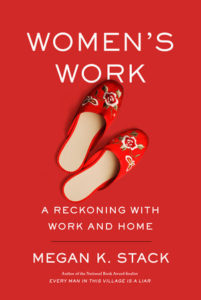 From Women’s Work. Used with permission of Doubleday. Copyright © 2019 by Megan Stack.

Megan K. Stack has reported on war, terrorism, and political Islam from twenty-two countries since 2001. She was most recently Moscow bureau chief for the Los Angeles Times. She was awarded the 2007 Overseas Press Club’s Hal Boyle Award for best newspaper reporting from abroad and was a finalist for the 2007 Pulitzer Prize in international reporting.

Interview with a Bookstore:
One of the Nation's Oldest Black-Owned Bookstores 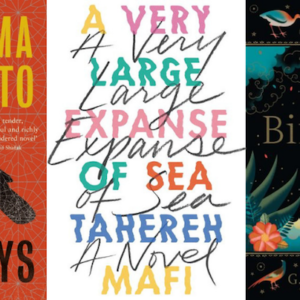 For April, Sumaiyya and Kendra, with special guest Amena Ravat, talk about Muslim women writers for our theme Ramadan Reading!   "And...
© LitHub
Back to top
Loading Comments...