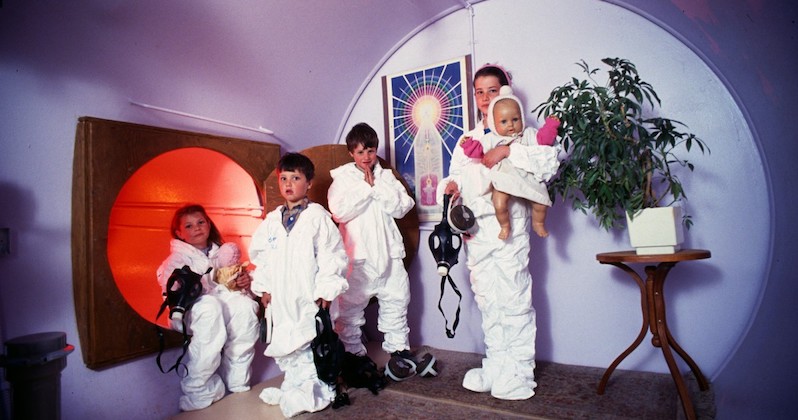 In Paradise Valley, It's Hard Work Prepping for the End of the World

Early in 1990, on the edge of Yellowstone National Park in Paradise Valley, Montana, construction was afoot on a state-of-the-art $25 million nuclear bunker facility under the 32 thousand-acre Royal Teton Ranch owned by the Church Universal and Triumphant (CUT). The church’s leader, the charismatic Elizabeth Clare Prophet or “Guru Ma,” believed that nuclear Armageddon was imminent—and therefore that the construction of bunkers in her community was not only prudent, but necessary and urgent.

According to Guru Ma’s son Sean, who managed its construction, the CUT bunker network comprised six distinct clusters made from stitched-together corrugated iron oil tanks salvaged from service. These tanks were buried in massive open pits, then covered in topsoil by heavy equipment. In each tank a kitchen, an infirmary, and laundry facilities were built. The largest tanks, a pair of 40-foot-wide, 325-foot-long arches, were connected by a central passageway to form a large H shape.

Supposedly, there was space in the bunkers for 750 church staff members and leaders. For congregants, though, a place in them came at a cost. One devotee, who had withdrawn her life savings, paid $6,000 for space in a bunker with 125 other people and seven months’ worth of food. Others, for the bargain price of $200,000, had bought into specially designed survival condominiums in the underground community.

In the words of Cold War historian David Monteyne, a bunker “is both designed to protect its occupants and to command a field of fire; that is, the bunker’s function is to control space, both interior and exterior.” It was hardly surprising, therefore, that the money being collected by CUT wasn’t only being used to build defensive structures—it was also financing the arming of Elizabeth Prophet’s followers.

This militarizing had aroused the interest of federal authorities. In 1989, Prophet’s husband, Edward Francis, had been arrested and convicted of purchasing $100,000 worth of weapons under a false name, for the “Rocky Mountain Sportsmen’s Survival Club.” The haul included ten Barrett M82 .50-caliber rifles capable of shooting down planes, Uzi machine guns, a rocket launcher with armor-piercing six-inch shells, and two Saracen armored personnel carriers (APCs) procured from a company in New Jersey called Tanks A Lot. What Prophet and Francis planned to do with this matériel was unclear, but the feds were clearly nervous about their intentions.

On March 15th, 1990, a day pegged by Guru Ma as the beginning of Armageddon, outlined in the Book of Revelation as the gathering of armies for a battle during the end times, more than 2,000 congregants locked themselves inside the bunker complex, waiting to cross to the other side. International news crews gathered outside the compound, also waiting for something to happen—if not the apocalypse, perhaps a mini one like the Jonestown massacre of 1978, which ended with more than 900 dead.

Elizabeth Prophet had seen astrological parallels between the 14th century and the 20th.

Alas, on this day in 1990, the end didn’t unfold as promised and the news crews packed their equipment back into their vans and sped off. Weirdly, the failure of Armageddon to arrive on the stated date didn’t slow construction, or, for that matter, unit sales.

In an interview with KULR-TV in Billings, Montana, Sean Prophet suggested that the bad press over the prosecution, the media frenzy surrounding the failed end-times predictions, and a 31 thousand-gallon diesel fuel spill on the property had made “relations between the church and the townspeople [in Paradise Valley] frosty,” which prompted his mom to do a bit of PR work after the lock-in.

In an address to the Great Falls Rotary Club on April 7th, 1991, more than a year after the critical date, Guru Ma explained that they’d built the bunkers because “our government has not provided civil defense for us. Whether it’s the Soviets, a Hussein, a Kaddafi, or a Chernobyl, the threat is there and it’s real.” Plus, she hastened to point out, she’d never actually predicted the end of the world.

“Our fallout shelters have confused and frightened some Montanans, and this is understandable, since to many Americans shelters connote paranoia and extremism,” Prophet said. But, she asserted, her bunkers were based on science. She had seen astrological parallels between the 14th century and the 20th. In the 14th century the world was wracked by war, famine, economic hardship, and a plague that killed a third of Europe’s population.

In 1991, she suggested, AIDS, cancer, the hole in the ozone layer, and the proxy war with the Soviet Union unfolding in Iraq were cracking the seven seals described in the Book of Revelation.

Evangelical Christian beliefs in the apocalypse are often refracted through the prism of the Book of Revelation, the final chapter of the New Testament. In it, Armageddon is triggered by the breaking of seven seals that secure a scroll that John of Patmos—the author of the Book of Revelation—saw in an apocalyptic vision. The four horsemen of the apocalypse—conquest, war, famine, and plague—correspond to the first four seals. According to some theological interpretations these horsemen have already been loosed on the world.

Guru Ma suggested that the fifth seal, defined in the Book of Revelation as the martyrdom of the saints, where even the devout are slain, was embodied by nuclear weaponry, a creation that did not exist on Earth until humans channeled it through dark arts. Her preparations, she informed the Great Falls Rotarians, were simply a practical way of surviving the inevitable unfolding of events long enough to enter the new era, which would come about after the breaking of the fifth seal was unleashed and the wrath of God delivered. Salvation, she preached, lay on the other side.

Prophet had already written about these theories in her 1990 book The Astrology of the Four Horsemen, a geopolitical field manual steeped in a very West Coast brand of astrological eschatology. In the year the book was penned, the US military moved into Baghdad during the first Gulf War as then-president George H. W. Bush spoke of creating a “New World Order.”

For many Americans, the phrase was resonant: people were quick to point out that the archaeological ruins of Babylon were just over 50 miles south of Baghdad, and saw the invasion as resonating with a passage from Revelation. “Release the four angels who are bound at the great river Euphrates,” it’s written in Revelation 9:14. To doomsayers like Guru Ma, this was clear evidence for the inevitable forthcoming apocalypse that would result in the formation of Bush’s New World Order.

Measured though she might have thought she was in her beliefs, a clear sense of disorientation bleeds through Guru Ma’s speech, one that all too recognizably stems from nuclear dread. This phenomenon had become embedded in the American psyche over the previous three decades and more. It was the subject of a powerful piece of writing by that colossus of international politics Hans J. Morgenthau, who in his 1961 essay “Death in the Nuclear Age” meditated on what such a nuclear war might mean, at a time when most people were still getting their heads around it.

The concept of nuclear war has long since embedded itself deep in our collective psyche as the possibility of the erasure of everything.

“The significance of the possibility of nuclear death is that it radically affects the meaning of death, of immortality, of life itself,” Morgenthau wrote. “It affects that meaning by destroying most of it. Nuclear destruction is mass destruction, both of persons and of things. It signifies the simultaneous destruction of tens of millions of people, of whole families, generations, and societies, of all the things that they have inherited and created.”

The concept of nuclear war has long since embedded itself deep in our collective psyche as the possibility of the erasure of everything: our bodies, attachments, objects, and memories. Indeed, Morgenthau insisted that our desire to hold on to life is more than biological or individual; it is also about a desire to hold on to these social attachments. Many of us find the idea of isolation more terrifying than death. Guru Ma was among them. Faced with the obliterating prospect of nuclear Armageddon, she sought to preserve her connection to the world through her community of survivors.They would survive the breaking of the fifth seal because they were prepared.

That desire lives on. A few years after the turn of the millennium, two cultural geographers traveled to Paradise Valley to see what had happened to the Church Universal and Triumphant. Locals had reported hearing extended bursts of weapons fire on church land at night. One resident told the researchers bluntly that “if those people don’t still have an underground warehouse of weapons, I’ll kiss a cow.”

In the intervening years, the Church Universal and Triumphant has continued to flourish, with local congregations in more than 20 countries. CUT, and other similar “survivalist” movements—subterranean communities meant to arise, thrive, and survive, with or without the state—help us to understand how the modern prepper movement evolved into the multibillion-dollar-a-year industry that it is today, putting flesh on its ideological and eschatological roots. 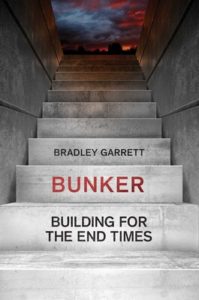 Excerpted from Bunker: Building for the End Times. Used with the permission of the publisher, Scribner. Copyright © 2020 by Bradley Garrett.

Bradley Garrett is an American-born social and cultural geographer and expert on exploration, urban politics, and subterranean space. He holds a PhD from the University of London and has published over fifty academic journal articles and book chapters. His work, which often has him entering lost, forgotten, or off-limits places, has been featured on the History Channel and in The Atlantic and GQ. He has previously authored several critically acclaimed books on urban exploration. 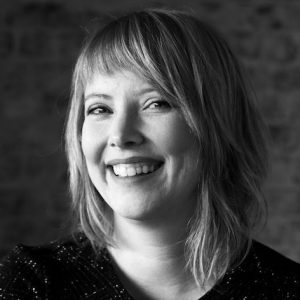 Few science fiction writers have their vision of the future tested immediately upon publication. But that’s what happened...