And More from the Week in Literary Film and TV News

This week in literary film and television news, there was so much good going on. For one thing, I found out that two novels by two of my favorite contemporary writers, N. K. Jemisin and Victor LaValle, would be getting small-screen adaptations—plus Donna Tartt news, which is always appreciated. For another, turns out that St. Vincent is directing a female-forward adaptation of The Picture of Dorian Gray, which one has to assume will be weird and sexy and amazing. Plus, excellent casting news on a couple of my most anticipated projects, and, as always, your weekly dose of Stephen King news. What else is new:

N. K. Jemisin is having a very good week. Er, year. Well, succession of years, really. Last Friday, she won the Hugo Award for the second year in a row. On Tuesday, the third novel in her Broken Earth series came out, and I saw two other people reading it on the subway (we exchanged very big smiles). On Wednesday, Deadline announced that a television version of The Fifth Season is in development at TNT with Leigh Dana Jackson writing the adaptation. This is excellent news. (Anyone who has been slouching on reading this series—I’m looking at you, literary readers who “don’t do genre”—stop depriving yourself and pick it up.)

Next up in news so exciting I really can’t stand it: apparently St. Vincent is directing an adaptation of Oscar Wilde’s The Picture of Dorian Gray, and casting a woman as the lead role. Whatever you’re picturing right now, I’m pretty sure it’s going to be better. My burning question now is: who’s going to play her? All suggestions/dreams/wishes welcome.

It didn’t take long for someone to scoop up the film rights to Ruth Ware’s bestselling thriller The Lying Game—that someone being The Gotham Group, who will produce adaptations not only of The Lying Game but also Ware’s previous novels, The Woman in Cabin 10 and In a Dark, Dark Wood.

Analysts predict that the new adaptation of Stephen King’s It will make a lot of money this fall. They also predict that winter is coming, water is wet, America is doomed, etc. etc.

Here’s some more good news for people who love good news: Victor LaValle’s latest novel, The Changeling, has been picked up for adaptation by Annapurna Television, with LaValle in a co-executive producer position. This is going to be one terrifying television show, my friends.

Your nerdiest dreams—or no, the nerdy dreams your dream nerds dream, that you would never dare to—are coming true. David Tennant and Michael Sheen will be starring in the Amazon adaptation of Terry Pratchett’s hilarious fantasy novel Good Omens, with Tennant as Crowley and Sheen as Aziraphale. “I swear to god, Terry would be absolutely over the moon,” the late author’s assistant told The Guardian. “We’d already talked about our dream Aziraphale and Crowley, and David Tennant was there. I can’t begin to tell you what a fan he was of David and Michael . . . He’d be looking down now and would be so incredibly pleased.” Us too, Terry!

Channing Tatum is set to star in Universal Pictures’s adaptation of Bloodlines: The True Story of a Drug Cartel, the FBI, and the Battle for a Horse-Racing Dynasty, a forthcoming work of nonfiction by Melissa Del Bosque. But will he take his shirt off? Only time will tell.

Joy Nash has won the lead role in Marti Noxon’s adaptation of Sarai Walker’s Dietland. “Joy is everything I hoped we’d find in our leading woman—beautiful, smart and blazing with talent,” Noxon told Deadline. When she auditioned the whole room was electrified. I can’t wait for the world to meet her ‘Plum.'”

Finally, Peternelle van Arsdale’s The Beast is an Animal is coming from Amazon Studios, to be produced by Ridley Scott’s Scott Free and (hopefully) directed by the team known as Bert & Bertie. 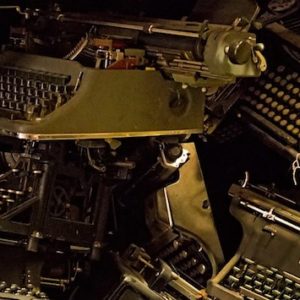 “Writing,” as Voltaire’s famous maxim goes, “is the painting of the voice.” But it’s never been quite as simple...
© LitHub
Back to top