Who Do We Become When We Survive Our Pain?

Karen Havelin: "Having a body is not for the faint of heart."

Italians flirt so casually with death. I gasp and clutch my seatbelt from within the safety of our car as a young couple shoots past on their Vespa, overtaking in the middle of a turn where they have no way of knowing they won’t be crushed. A miniskirt flaps so a smooth, tan thigh comes to show and the young gaze that briefly meets mine from over the shoulder of the Vespa’s driver is completely relaxed. Flowers and candles create Memento Mori tableaux in the hairpin turns connecting the towns as we make our way to Rome.

San Leonardo is popular in Liguria; in Genoa, he roasts on the grill above the church door, and there he is again in Porto Venere. Trying to cool off one blistering afternoon, I wander through an open door into a small church on a steep street in Ventimiglia’s old town. The half-lit room smells of incense. I wonder vaguely if my bare shoulders will offend anyone, but there is no one there, though the candles are lit. There is a reclining, life-size statue of Jesus on a low bench up front. His bleeding, suffering body is awkwardly placed on actual silk pillows on the seat of the pews. The room has a strange atmosphere, as if I’ve come wandering into his cubicle in the ER, and the doctor and nurses will be right back to try to save his life. I make a discreet exit.

The Tesoros that are distributed over the different churches all have something to do with corpse parts—some junky-looking object that a dead piece of a human body has touched. A human body that has traveled through the worst grotesqueries anyone could think up, to the very farthest edge of the body to get to God.

The past eight years of my life have included complicated abdominal surgery, and two new diagnoses to add to my list of chronic illnesses, before a neck injury led to weeks of excruciating pain in the hospital awaiting an operation to correct it. While recovering from neck surgery, I had to transition my bone-weary body off the strong opioids and anticonvulsant pain drugs I was on while hospitalized, I was later forced to buy some painkillers at but I didn’t take them as often. I was mentally and physically exhausted and a phenomenon of confused brain chemistry meant that this process blossomed into several months of horrible anxiety and strange symptoms of altered reality.

I felt like my body was a beacon for receiving agony from the universe—my very existence unfamiliar and too frail for words. I’ve spent years in the dusky, threshold state of agonizingly slow recovery. It has left me feeling that the veils between worlds—as well as between creatures in this world—is already a little too thin. It’s no stretch for me to imagine that strange and horrifying things could happen out of nowhere; skins could be shed, a random act of curiosity, pride or failing compassion could lead to perplexing and terrifying turns of event; to drawing the merciless gaze of a vengeful deity.

The body is not for the faint of heart. It is a luxury to not need to consider your body, to not be aware of it at every turn.

At Villa Borghese in Rome, several of the most stunning art works we see are based around rape, a young girl trying to avoid being taken to a second location against her will, terrified eyes, grasping fingers against the smooth skin of her bared thighs. A moment of horror carved into an object of alarming beauty—such movement and terror captured in the silent, cold marble. The paintings in golden, carved frames are hung several high on the walls. The walls themselves are decorated with columns and gilded, baroque curlicues that shine in the low light, and the floors each have their own elaborate, multicolored mosaics. We stroll around in the sounds of shuffling footsteps on tiles and many spoken languages mingling until the sheer volume of art becomes dizzying, nauseating. Almost every room possesses a new fresco; one has several tiers of contorting gods gazing down at us, painted so the edges of the room become just another level in the pyramid of celestial hierarchies. All those bulging eyes, yelling mouths, bodies always twisting, swelling, tearing, always in the middle of something violent and earth-shattering.

Rome itself is a haze of ancientness, the layers of outlandish stories where the lines between myth and actual history blur in the distance of years. All those accounts consisted of real bodies that walked here on these streets, the stone worn down one light human step at a time. Keats, who breathed this soft air at the end of his life, also had a young body with fingernails and skin just like me; hair, shirts that smelled of him, sweat and sleep. His death was not abstract or romantic, but agonizing, dizzying loss of corporeal control, unbearable stomachaches and sore, insufficient breath. Reading his last letters, I recognize the sense of vertigo, how familiar things have turned torturous. Writing, that expedition to the most distant territories of the known, which sometimes seems like it could save my life, has itself become perilous.

“There is one thought enough to kill me—I have been well, healthy, alert, walking with her—and now—the knowledge of contrast, feeling for light and shade, all that information (primitive sense) necessary for a poem are great enemies to the recovery of the stomach.”

Several instances in my own life indicate it’s not quite as straightforward as fever, illness, disturbed brain chemistry merely interrupting your ability to perceive a fixed, literal world of objects behaving reliably in space and time. If you get deep enough into the sciences, quantum physics in particular, the lines blur and that too becomes challenging to grasp, about theories that sound crazy and mysterious.

At the deepest level, it starts to look a bit like myth and philosophy, story and metaphor again, like human beings grabbing for ways to make the entirety of the world and its history fathomable to us.

The body is not for the faint of heart. It is a luxury to not need to consider your body, to not be aware of it at every turn. To wake up in the morning confident that your body and mind will be roughly the same as yesterday, won’t torture you or make the world unrecognizable. It takes time to get used to a new body after surgery and illness. The act of surrendering to anesthesia in itself is dangerous. The anesthetist stops your breathing, and you disappear entirely from the world for several hours of your life, hours of such vital importance to you. You undergo a metamorphosis. You are reawakened to a new body after surgery, one that looks, functions, and feels radically different. It takes time to become accustomed to the crudeness of stitches in your skin, of your body having been rearranged by someone else’s hands.

Perhaps throughout most of history, people with my kind of neck injury would kill themselves; struggle as best they could until death became the desired outcome over continuing to live in extreme pain. It’s not hard for me to imagine. If only we could leave behind the feeling of danger when the moment of horror is passed. The more trouble I’ve lived through, the more I am drawn to seek out ancient text and see how humans made sense of a world where they had even less control than I have today.

In the past, people were painfully aware that all humans are at best temporarily able-bodied. Almost anywhere but here and now, the pain would have been mine for life. People throughout history died of the most ridiculous things. A medical problem reared its head and within days or weeks the sick person was gone, with the same speed as in a clichéd work of art: that character seemed to be pegged all the time for that kind of death. The family watching horrified, praying to no avail. They were terrible deaths, spewing black liquid, choking on blood, screaming in unaesthetized childbirth.

When I was very ill and in pain, these thoughts didn’t bring relief by making me see how lucky I am to be born where and when I was. Instead, when I was past a certain point, exhausted and in despair, I couldn’t help multiplying every pain and discomfort I felt by the degradation, deliberate intent, and dirt that must have accompanied so many people stuck in impossible bodies throughout history, and in less fortunate circumstances than mine now. The view widened and deepened. I would end up nauseated and even more anxious. It’s unbearable. The sickening sensation of loss of control of one’s body, of fate in some form swooping in and leaving nothing ever the same, must be one of the most common human experiences through the epochs. The abject terror and misery of having no power over yourself—need to cry “have mercy!” is neither new nor unique.

A human life is a frail and temporary thing, but we do occasionally leave something behind. Even as the context and precise meaning are lost with the years, now and then, someone sees a piece of art and is moved to think, feel, act, or write. Beyond that, we’re all floundering on the ground under the lofty gaze of fickle forces. Karen Havelin’s Please Read This Leaflet Carefully is out May 7, 2019 via Dottir Press.

Karen Havelin is a writer and translator from Bergen, Norway. She received her MFA in fiction from Columbia University. She lives in Oslo, Norway. Her work has been published in Agave Magazine, Words Without Borders, Brooklyn Quarterly, Narrative North East,and Lunch Ticketamong others, as well as several Norwegian literary magazines. Please Read This Leaflet Carefully is her first novel. 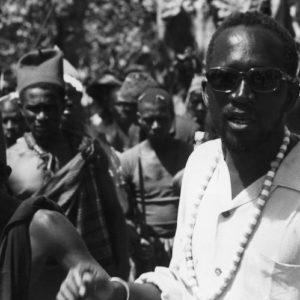 Twenty-one seconds in and the screen goes black. Two seconds later, a quote appears: “If Africans do not tell their own stories,...
© LitHub
Back to top