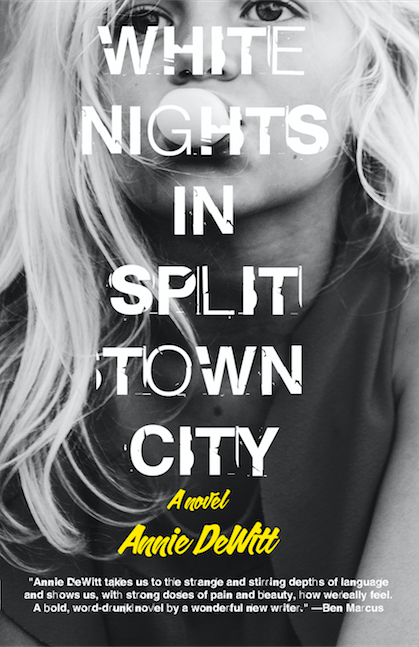 The following is from Annie DeWitt’s debut novel, White Nights in Split Town City. DeWitt it a fiction writer, essayist and critic. Her writing has appeared in Granta, Tin House, The Believer, Guernica, Esquire, BOMB, NOON, Electric Literature, Bookforum, art+culture, and The Faster Times, among other publications. She holds a B.A. from Brown University and an M.F.A. in Fiction from Columbia School of the Arts where she currently teaches.

The day after Father’s big fish, I was waiting for Fender at the start of the drive. The smell of bass in the morning is enough to make anyone go running into the world. Father was sleeping. I scribbled a note for him on a napkin and left it in the kitchen under the glass duck where Mother’d once stashed notes to Father those nights she was going to be late at a Separatist meeting.

“Well,” Fender said. “If your funk gets too thick down there in the clearing, you might have to go bathe it off in the stream.”

We’d flung ourselves headlong into a stealing pact, pilfering Liden’s collection of dirty magazines. Fender’d come down one morning with a bruiser. Liden had gone on a hitting streak. K and I iced Fender’s eye with bags of frozen peas. We made him promise he’d sleep it off in the basement.

Fender and I were going to paper the box by the marsh with cut outs from Liden’s magazines. Fender’d been slipping them out of the attic one by one since the bruiser. Each morning he brought me a few glossies: monster trucks, and Sports Illustrated, and some of the harder core stuff, which he kept at the bottom of the pile and told me not to be alarmed about. “That’s not for papering,” he said. “One night we’ll build a bonfire and blaze this smut.”

“Sure,” I said. Smut sounded like it would burn.

Fender was leaning hard on something. “Dad’s home,” he said. “First time since last time.”

“Oh,” he said. “When Mom went on a cruise with her pharmacist. Said he came around to watch over us while she was out fucking. Admitted to liking us a little bit even.”

“You’re a likeable lot,” I said. “Minus your brothers.”

“Mostly,” he said, “I think he came back to clean out his things when she was out of his hair. Now he’s on us about the house.”

“I don’t know,” he said. “He left it to her when he split. Payoff for his mistress until he found out she had her own on the side. Now he lords it over her whenever he’s short on money.”

“Nah,” he said. “At this point we probably belong to the state.”

“Refugees of California,” I laughed pointing at an ad for surfboards on our box.

“Right,” he said. “At least it’s better than Michigan. Michigan never had any thing other than a lake.”

“Well,” I said, “At least you could row out into it if you needed to make a break for a while.”

We abandoned the bikes in the sand next to the mailbox and packed into the marsh on foot. Every now and again Fender gunned me with one of his half-smiles. When the wind picked up, I thought I smelled a trace of cologne he’d lifted from his father.

At the bridge, he smoked a few cigarettes while I rummaged around under the trees picking my sprinters, short narrow twigs with enough heft to get picked up by the current but without the girth to create friction with the undertow. I won twice of my own merit.

Fender lifted a small golden bottle out of the pocket of his bomber, which he said he wore to protect his arms from the brush, but really I knew he was keeping his bruises hidden.

He took a few swigs, more nosegay than fire. It made me sad, this kind of trying.

It didn’t take long before the box from the rider was gleaming. Elmer’s glue, monster trucks, beaches with girls with all their womanhood in the chest. According to the front door, Winchesters were on special. We clipped the ad for surfboards that boasted the slogan: California Dreamin’, and posted it on the rear wall above the little window I’d slit.

The box was big enough that we could lay side by side on our backs with our legs stretched. Fender had stripped down to his shorts. He bathed his T-shirt every now and again in the stream and tied it around his neck.

“Take that thing off,” I said. “Before you flood the place.”

I straddled his middle with the thick part of my thighs while batting around at his head trying to undo the place where his T-shirt was knotted. The move was a holdover from childhood games of wrestling with Father. Father had said he didn’t want me to turn soft like him.

Fender was swift but I had the advantage of his sleepiness from the liquor. I had him by the wrists. We paused like this for a minute, his arms out in front of me, raised up above his head. His chest heaved. I looked him in the face.

“Not bad for a light weight,” he said.

We struggled, my forehead cupped in the palm of his hand, the weight of my body blazing down into him, until a head rush set in.

I crawled off Fender’s body and lay on my back beside him. I pulled the front of my T-shirt out of my cut-offs and wiped the sweat from my eyes.

“You’re taking up all my hot air,” Fender said quietly.

I could feel the hair under his armpit brush my neck as he slipped his arm under my head.

I slid my hand down the front of my jeans, pausing to be sure he was watching. As I stared up at the sky, I made small circular movements with my hand. The birds chirped and Fender was silent as he watched. I thought of the young girl in the barn, the day she had showed me. She’d laid down in the hay stall one afternoon and spread her legs. She was wearing a pair of thick white tights with one of those circular crotches. Her hand moved around inside it.

Afterward, I went over to the tree where I’d hidden the rucksack. As I bent over to readjust my hair, I felt a sting on the back of my legs where Fender flicked me with the wet part of his T-shirt.

“Got yah,” he said, sprinting past me up the trail out of the marsh.

When emerged onto the road Otto was having it out with The Sheik in front of the barn. The Sheik had witnessed a great fright in his youth. The sound of water in a gutter ten feet off made him stop short. Otto was trying to train the nervousness out of him. There was a thick sheen to the matt of The Sheik’s coat. His legs frothed under his tail. Otto spurred him forward, trying to get the horse to stand with his hooves on the grate in front of the barn where the runoff from the mountain emptied out into the sewer.

I admired Otto for the way he rode with his hair gleaming. Helmets, he said, were for novices and women. I’d heard him tell Father that saddling a horse was like taking out the mother of your children. You combed your hair and dressed for the occasion. Rumor had it, Otto’d trained horses for the Kennedys once.

The Sheik stared unflinchingly at the sewage grate across the road as we approached. His front legs were squared. Otto let him have it on the head with the blunt end of the whip.

“Flighty devil,” Otto said, stroking The Sheik on the withers once the horse was straddling the grate. A thin sweat had broken out on Otto’s brow. He dabbed at the moisture with his hankie.

As Otto dismounted, Callie made her way down the drive.

“Why don’t you take this flighty little Arab out jumping while he’s good and greased,” Otto called to her. “He’d fly over a barrel of burning petrol if you asked him.”

“The old show boat,” Otto said. “Sides of iron. Soft as hell in the mouth. Doesn’t like other men hanging on his beauty.”

“You know what they say, baby,” Callie said, gutting the foam from the corners of the horse’s mouth where it had gathered around the bit. “A feather in the saddle is a bird in the hand.” She smiled at Father.

I remember the rise and fall of Callie’s bottom as she trotted off down the road toward the far pasture where Otto had set the jumps. It was that time of the day where the shadows grew long and dusky. What was left of the sun existed somewhere between the curve of Callie’s behind and the saddle. We all stood there admiring it for a moment.

“Haven’t known a horse that hasn’t taken to her,” Otto said.

As we turned the bend toward the paddock, Birdie was coming up the road. She was carrying a small metal tray lined with Dixie cups. Watching her approach in the setting darkness, it seemed the world would swallow her whole. She’d spent the day at the Starlings’ under the care of their eldest daughter who was trying to convince her suit, the one in pharmaceuticals, to give her a baby. In the meantime, she was borrowing other people’s children to show off her skills.

“What have we got here?” Otto said, kneeling down to examine Birdie’s tray.

Birdie put the tray down in the road and reached into her pocket. She produced a wad of bills.

“Where did you get those?” Father said.

“Ray’s daughter sent me out with them,” she said. “She said I could keep a dollar for every ten.”

We stood there staring at the wad of green in Birdie’s fist wondering if Ray’s daughter was back on coke and needed money.

I looked down at the rows of Dixies. The mouthwash had saturated a few. A thick blue liquid seeped onto the tray.

“Well I’m no stranger,” Otto said, reaching into his billfold and handing Birdie a ten dollar bill. “I’ll buy you out. You didn’t do anything wrong.”

Otto took a cup from the tray and shot the liquid into his mouth, swishing for a minute before spitting into the grass.

“Not bad,” he said to Father. “Toothpaste and club soda.”

Callie was making the rounds by the time we reached the gate.

“Jumped three foot fences since the first time I threw her in the saddle,” Otto said watching. “I’ve never seen a woman more alive with her feet off the ground.”

“Some people just aren’t made for walking,” Father said.

“Never was. Never will be,” Otto said. “Problem is, she doesn’t have an eye for a husband that can hold her anywhere but half way down his nose.”

We stood watching Callie jump until there was enough dusk in the air that the oxers had lost their color.

Ten Writers Who Did Quit Their Day Jobs 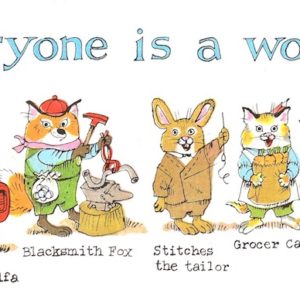 Ten Writers Who Did Quit Their Day Jobs It would be easy to list the most famous novelists who had previous careers, especially as those are many; Chaucer was a civil...
© LitHub
Back to top