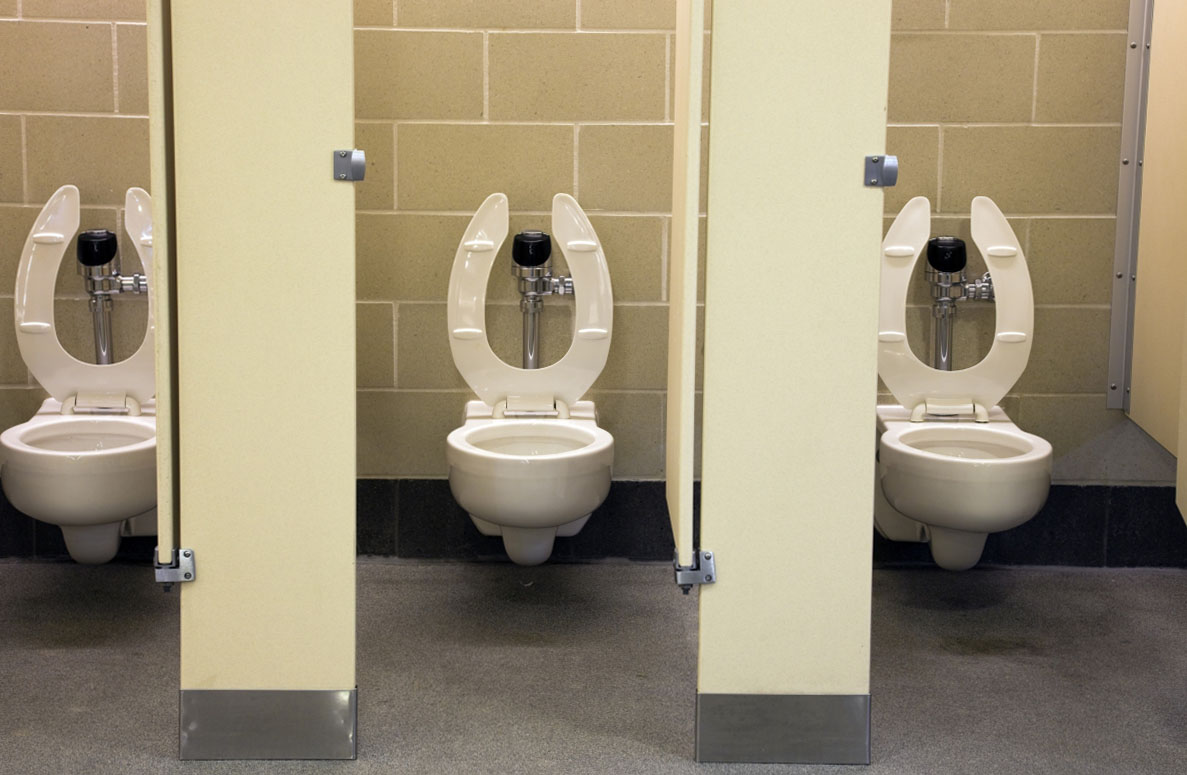 On Public Bathrooms, Anti-Trans Policies, and What Belongs to You

The second sentence of Garth Greenwell’s novel What Belongs To You tells us where we are and why. “But warning, in places like the bathrooms at the National Palace of Culture, where we met, is like some element coterminous with the air, ubiquitous and inescapable, so that it becomes part of those who inhabit it, and thus part and parcel of the desire that draws us there.”

I too have had sex in a public bathroom. I’m a queer cis man, but to resist stereotypes: the first time I hooked up in a public bathroom was with a woman. The second time, too. In college, roommates drove us out and into the open, into public spaces, into bathrooms with tile floors and walls that smelled faintly of bleach, of bodies. Most of my friends, straight and gay, have a bathroom sex story. Some are with long-time lovers; others have cruised for a touch, a kiss, the feeling of their knees on a too-hard floor, patterns in the tile leaving days-long marks, red, on skin.

This has been the year that cruising has reached the literary mainstream. What Belongs To You uses anonymous gay sex in a public toilet as a point of departure. It is there that our narrator meets the man—Mitko—who will become his lasting obsession. Greenwell’s book has been reviewed glowingly by The New York Times, The New York Times Book Review, The Wall Street Journal, The Guardian, The New Yorker, and just about everywhere else.

This has been the year that gay, queer, and especially trans bodies have been made criminal entities simply for existing in public bathrooms. A series of states have attempted to pass legislation making it an actual crime to go into a bathroom that doesn’t match the gender on one’s birth certificate. North Dakota. Kansas. South Carolina. Minnesota. And a ballot initiative in my home state of Washington. In North Carolina, it’s already law. Stories out of Texas make it clear that harassment of trans and queer bodies in bathrooms, which certainly existed before these laws, is a real and violent threat.

2016: the year sucking dick in public bathrooms is heralded as high literature. 2016: the year public bathrooms became illegal for trans bodies. It is in bathrooms that these two trends—integration into the mainstream literary canon and a rightwing backlash against gay and trans progress—currently meet. Bathrooms: sites of necessity, sites of expulsion, sites of violence, public yet private, utilitarian sites and sites, as Greenwell reminds us, of lust.

Gay cruising has been around for hundreds of years, and has been reflected in art for generations, but this art has largely remained marginal, queer. The New York Times rightly contrasts the reviews of Greenwell’s book to the tepid reception for previous gay writers (who, it must be said, are still mostly white). Alan Hollinghurst, whose book The Swimming Pool Library is likewise set into motion by a chance meeting in a public bathroom, and Edmund White were long dismissed by the literary establishment as niche writers, as fags. Their work might be important to other gay men, but critics considered it everything but universal. The queerness in James Baldwin’s fiction might be an early exception; his gay sex scenes, though, tend toward loving if destructive relationships; his sex scenes hint, reveal, withdrawal. Jeanette Winterson writes sex beautifully and has a largely queer readership. At the same time straight, white Chuck Palahniuk can write about using a swimming pool to self-perform analingus and be praised as highly literary. Trans writers are writing brilliantly, but outside of the literary mainstream altogether.

Greenwell knew it was a risk to write a gay book, and one about sex. Gay books don’t sell. He wrote it anyway, and whatever moment we are having has allowed Greenwell his own. His book is selling. In conversation, Greenwell points out that what we call literary, what we call art, is what we value.

The literary world is notoriously liberal, but recent conversations inside and outside publishing have made it quite clear that liberal often still means straight, white, and wealthy. The south is often viewed as socially conservative, restrictive, yet southern cities are havens for queer people, and anti-gay and -trans hate crimes occur in our gay capital cities: New York and San Francisco. It’s hard to know what safe space looks like these days, but as a queer man from the rural West, I recognize the isolation and loneliness of Greenwell’s narrator.

Greenwell and his narrator are both from the American South. Greenwell and his narrator both survived fathers that barely tolerated an odd son and then entirely disowned a gay one. What does it mean that a novel about—in part—how dangerous it can be to be queer in the South arrives at the moment that queer and trans people in the South and elsewhere are under such vicious attack?

The anti-trans laws that are sweeping the conservative corners of our country are based on a perceived threat. Bathrooms, as public space, need to be safe (for straight people). Either trans people are predators or visibly queer and trans bodies in and of themselves are a threat to straight safety. The paranoia seems to relate to the age-old conflation of gay people with predators and pedophiles. We know that trans people are not more likely to be predators; rather, they are disproportionally likely to be victims of violent crime, including rape. Islan Nettles, a trans woman, was murdered when a straight man who was flirting with her realized she was trans and felt his masculinity, his straightness, questioned. Straightness seems awfully fragile to need protection from a trans threat that literally does not exist.

At this year’s AWP, a major conference for creative writers, I attended a panel with trans writers, largely poets, speaking on spirituality. The fluorescently lit hotel room took on the feeling of church, with tears, shouts, amens. Poet TC Tolbert spoke about how his Pentecostal upbringing had moments that were breaks with one’s body, allowing for possibilities beyond one’s physical being. How queer, how trans. Writer Ryka Aoki spoke about the possibility that spaces like AWP create queer community building in spite of their overwhelming straightness. Aoki, after the audience’s standing ovation, had the last word. At this conference, she reminded cis audience members, we almost certainly shared a bathroom with a trans person. “Nothing happened,” she said. There was no danger, no threat. Trans people just want to piss in peace.

I don’t want to place my belief in the potentiality of cruising against trans people needing spaces to legally exist and piss. I don’t think that’s the choice we have. All straight people have the right to piss without being harassed. Predation and sex are not the same. But thinking that straight people are harassed by cruising is wrong. There are generations-old codes of cruising. There are places to be and times to be there. There are motions of the head, of the hands. There is eye contact. There is—there must be—consent. Otherwise, what we are talking about it sexual assault, and sexual assault is already criminalized.

Public bathrooms are a place where bodies can and will meet. Greenwell has talked about how cruising “scrambles” desire in a way that can sweep issues of race and class away the moment desire clicks on. The straight phobia is perhaps that sexuality will get lost too. I can’t find a single newspaper clipping about a trans person victimizing a straight person in a public restroom. What I can find are many, stories about seemingly straight men cruising. Sometimes powerful straight men. Often homophobic straight men. Occasionally homophobic lawmakers. Guess where?  Public bathrooms.

I wonder if it’s not the undesirability or oddness of queer and trans bodies that requires our removal, but rather the fear that our bodies will be, in a flash, in a moment, all too desirable. In a flash, in a moment, one can go down the path of Greenwell’s narrator. One will become entangled, attached. It feels as though only a thin line separates our narrator and Mitko, the hustler, homeless, always a little too drunk, always in desperate need. The narrator—American, educated—isn’t from money. He could have ended up homeless, kicked out of his family. He, too, spent his youth cruising public bathrooms. The narrator controls his language so carefully, perhaps, because he knows how close we all are to the edge, to chaos.

Our bodies and what we do with them, that’s all we have. We will never be able to make a certain type of straight person feel safe. Our very bodies, the fact of our queer and/or trans existence, is terrifying. They forget, it seems, that we live in an overwhelmingly straight world.

Apparently, a drop of queerness can infect them all. But we shouldn’t have to make ourselves asexual in order to be safe. Same sex cruising has happened in public spaces for centuries. With every apparently victory for LGBTQ people, a group of people will further dig in their heels. The cost of gaining acceptance into marriage, the military, might have been making us seem just like them. But, there’s no amount of cleanliness that will satisfy fundamentalists: they don’t just want us invisible in public spaces. They want us not to exist at all.

Greenwell has written this messy, sexy, and true narrative into mainstream contemporary literature. In his work, queer desire and public sex are rendered visible. Toward the end of What Belongs To You, Mitko arrives at the narrator’s door. In an attempt to resist desire, to stay faithful to his new boyfriend, the narrator refuses to let Mitko into his apartment. Instead, they go to McDonald’s. The narrator buys Mitko a milkshake, which he had never tasted before, and watches his glee at first sip. It’s as innocent and joyful moment as they will ever share. When the narrator goes to the bathroom, Mitko follows him.

I had known it was he when the door opened, it never occurred to me it could be anyone else, as it never occurred to me to tell him to stop, or occurred with so little force it was lost in the sweep of my excitement. There wasn’t a lock on the door, we could have been interrupted, and maybe the risk heightened my pleasure as Mitko pressed his whole length against me, placing his feet beside mine and leaning his torso into my spine, his breath hot on my neck.

This is the joy of queerness, of connection: borders that feel so concrete can turn out never to have existed at all. In our narrator’s words, “Love isn’t just a matter of looking at someone, I think now, but also of looking with them, of facing that they face.” Transcendent and wretched at once. Love and empathy and desire, all the same. Straightness ought to feel fragile compared to that.

Joseph Osmundson is a scientist and writer from rural Washington State. His work has appeared or is forthcoming in The Rumpus, Gawker, The Los Angeles Review of Books, The Kenyon Review, and The Feminist Wire, where he is an Associate Editor, among others. His chapbook, Capsid: A Love Song was recently published by Indolent Books. He's currently a post-doctoral fellow in systems biology at NYU.
http://www.josephosmundson.com

At the GrubStreet Writers of Color Roundtable 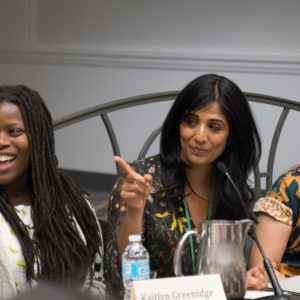 At the GrubStreet Writers of Color Roundtable

At the end of April, I attended the 2016 Muse and Marketplace Conference, hosted by the Boston-based independent writing...
© LitHub
Back to top