Sarah Kozloff on the Cross-Pollination of Art Forms

Scholars have tried to pin down the effects of the invention of film on the novel for decades. One of the complications is that certain literary techniques that may strike us as cinematic—like cutting between two visual images or moving between two locations—actually precede the development of cameras or editing. The director and film theorist Sergei Eisenstein shows that you can hunt through earlier literary traditions and find passages that read like montage. After all, film and literature both rely on human perception and narrative traditions; movies may just have named and emphasized pre-existing aspects of storytelling.

An even bigger complication lies in the fact that both filmic and literary fiction flow through an endless variety of channels. Are we talking about Hollywood practices or non-Western cinema? Films noirs will use one style, grand epics another. Which literary genres? What time period?

When we talk about a book being “cinematic,” maybe what we really mean is that we can easily imagine this story—say The Godfather, Jaws, Gone Girl—adapted into a movie, with all the excitement we’ve come to associate with Hollywood.

Scholars often hail certain American authors of the first half of the twentieth century as “cinematic” and point to their biographical entanglements with the film industry. In Cinematic Fictions, professor David Seed shows how more than a dozen writers—including Hemingway, Fitzgerald, Faulkner, Dos Passos, Steinbeck, and Nathanael West—deploy elements such as the narrator acting like an observing camera, switching perspective from one character to another, the use of editing, or a kinship with documentary that link their prose to screen practices.

However, in less formal discourse, it is common nowadays to hear bloggers and editors use this language to signify exteriority and “showing”: “Cinematic technique is all about ‘show, don’t tell,’”  says C. S. Lakin in an online blog, while tck publishing warns, “if you use the cinematic viewpoint, you can kiss [interiority] goodbye.”

Even within a scene, I shift from a literal bird’s eye view to a close-up.

These ideas have also been endorsed by Elmore Leonard, author of westerns (like Hombre, which, by the way, became a decent film of the same name, directed by Martin Ritt and starring Paul Newman); crime novels (e.g. Get Shorty, also a movie, directed by Barry Sonnenfeld and starring John Travolta); and nine screenplays. Critic Christopher Orr labels Leonard, “America’s most cinematic novelist,” and indeed Leonard himself has admitted, “I’ve always seen my books as movies.” Introducing his rules for writing in the New York Times, Leonard announces that his goal is to “remain invisible when I’m writing a book, to help me show rather than tell what’s taking place in the story.”

I admire Leonard’s ear for dialogue, his sharp descriptions, and his sense of humor, but I don’t accept Leonard and his followers’ implicit understanding of movies. Maybe a security camera in a hallway merely shows figures from the outside, but this is not true of commercial features. Movies overflow with revelations of emotional states because actors give viewers access through their modulations of posture, gesture, movement, facial expressions, and voice. Voice-over narration or interior monologue habitually create intimacy or irony. And many films delve into characters’ past lives, dreams, or fantasies, splashing internal states on to what film scholars call “mindscreens.”

Nor do I believe that movies always prioritize “showing” over “telling.” As the noted literature scholar Wayne Booth taught us, that distinction is overblown to begin with: “showing” is just a more covert form of “telling,” an indirect style that gives the reader the illusion of discovering something for herself. Feature films—with or without captions or voice-over—are narrated by the multitude of choices that shape each moment. When Gary Cooper throws his badge down in the dust in High Noon, the film has

told us of his disgust with Hadleyville’s ideals of justice, just as clearly as if a Victorian narrator had given us a lecture.

So, we should be careful before we make hasty generalizations about art forms. Yet “cinematic” is also the term my editor uses to describe my writing style, which makes perfect sense, biography-wise; after working in film production on independent features, TV series, and commercials, I became an academic, teaching film history for over thirty years. My decades in the trenches of film history must have had an impact on me when I sat down at the keyboard. Where might this enter in? Here are my best guesses.

First, I have internalized the camera’s freedom to be anywhere at any time. In The Two Towers, Tolkien first traces the travails of one set of the fellowship for 200 pages, then he moves back in time to Frodo and Sam’s attempt to sneak into Mordor. A more cinematic approach is to intercut between characters and continents at will. Moreover, a film editor will cut to create a tense rhythm: in certain key chapters, I cut rapidly from one participant to another. Even within a scene, I shift from a literal bird’s eye view to a close-up.

Most novelists will rely upon “free indirect discourse,” that slippage into the characters’ minds that allows readers to know what they are thinking. By contrast, my characters often think in voice-over. During a fraught meeting with her councilors, Queen Cressa wonders, “Dare I push this issue today?” My animals also speak telepathically in a manner that reminds me of David Lean’s adaptation of Great Expectations. Young Pip has stolen food for the escaped criminal Magwitch; as he skirts a pasture, he hears the cows accuse him, “A boy with somebody else’s pork pie!”

Cross-fertilization (across media or genres) is likely to make old stories new.

Finally, I leaned on movies as models just as much or more than literary examples. I love the sequences in The Seven Samurai and its American remake The Magnificent Seven of the auditioning and gathering of the fighters; these movies were very much in my mind during a similar sequence at the start of Queen of Raiders. Objective Burma, a 1945 Raoul Walsh war film, flitted in and out of my consciousness during the Raiders’ incursion into an enemy country, as did Westerns in general. Gregory Peck’s calm quelling of a would-be lynch mob in To Kill a Mockingbird provided a model for a scene in book 4. I was thinking of Rutger Hauer in Blade Runner when I describe a character with white hair. The Dutch movie, Antonia’s Line, directed by Marlene Gorris, lies underneath the generations of queens and princesses and their individual talents. I’ve scattered names and lines of dialogue like Easter eggs. And Hitchcock presides everywhere, from plot twists to individual shots.

Every author will approach the blank page with her cache of memories from earlier stories and life experiences. My head happens to hold a jumble of moments from classic films; someone else’s might be stuffed with hip hop lyrics or video games. To me, this is all well and good, because cross-fertilization (across media or genres) is likely to make old stories new.

That’s just how the cookie crumbles. Or, “That’s the way it crumbles, cookie-wise,” as Shirley MacLaine says toward the end of The Apartment, revealing/telling/showing that her heart now lies with Jack Lemmon. 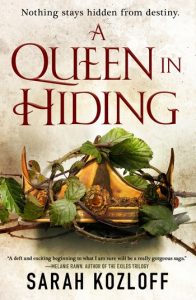 A Queen in Hiding by Sarah Kozloff is out now via Tor Books.

Sarah Kozloff, the author of A Queen in Hiding, holds the William R. Kenan Jr. Chair as Professor of Film at Vassar College. Her academic works include Invisible Storytellers: Voice-Over in American Fiction Film and Overhearing Film Dialogue. Her debut fiction series, The Nine Realms, will appear, one book per month, from January-April 2020. See more at Sarahkozloff.com or follow her on Twitter @sarah_kozloff.

Day Three at Yalta, the Conference That Shaped the World: 'The Whole Palace Was Bugged!' 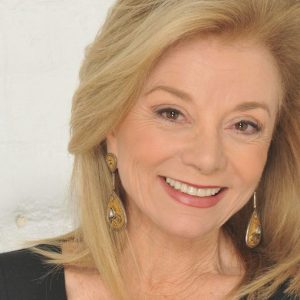 The #MeToo movement is thriving. Matt Lauer and Charlie Rose have lost their seats. Harvey Weinstein is on trial for rape....
© LitHub
Back to top
Loading Comments...