When It’s Good to Be Bad: Maris Kreizman Interviews (Her Husband) Josh Gondelman

The Author of Nice Try on The Maris Review

On when it’s good to be bad:

Josh: And you wrote about it in our wedding vows.

Josh: And I wrote vows to you also.

Maris: But that’s always been my beef with people who say that “Josh is the nicest guy on the Internet.” I don’t know if you’ve ever seen his dark side, but he can be dark.

Josh: That’s true, there is a dark side. I think that it’s good to say when things are bad. Does that make sense? It’s not always polite and it’s not always gentle, but there is a goodness in saying, “This is really fucked up, and I should really comment on that.” I think that’s an important part of being an adult.

On dealing with trolls:

Josh: When you and I were on vacation, I argued too long with dummies on the Internet because I made some joke after the death of David Koch. I said something along the lines of, David Koch had died and in lieu of flowers please construct a shadow organization of shady non-profits where you can donate to sway the course of American politics and deregulate the environment so you can destroy it. People were like, “Hey, a guy died.” Yeah, and when he was alive he was terrible. I think there is an importance to doing that. Then people were like, “He has a family. Are you going to show them the tweet?”

Maris: And you did spend an ample time of our vacation–

Josh: Arguing, yes. That’s a flaw. That’s wrong. That’s not the good part. That’s the darkness where I need to explain to every moron that just because someone is dead doesn’t mean that they were good.

On the difference between writing and standup:

Maris: You know, people ask me a lot if I’ve seen your act enough that I could perform it.

Josh: What do you say?

Maris: No. I mean, I understand that there are parts of it that I know very well, but this is something that you practice all the time.

Maris: This is something that you’re thinking about every day.

Josh: That’s so interesting. What a thoughtful answer to that question, and a flattering one certainly. I think what people mean—and this is not to instruct you but for the listener—is have you heard these words backwards and forwards that they’re seared to your brain? Your answer is so beautiful and thoughtful.

Maris: Because I love you.

Josh: And I love you too.

Maris: Of course, I know all the punchlines, and certainly part of standing backstage or sitting in the audience watching you perform is anticipating when the laughs are going to come and making sure everyone around me is enthralled.

Josh: What do you do when they’re not?

Josh Gondelman is a comedian and writer who has earned two Peabody Awards, three Emmys, and two WGA Awards for his work on Last Week Tonight with John Oliver. He is currently a writer/producer for Desus & Mero. His writing has also appeared in the New York Times, New York magazine, and the New Yorker. Nice Try is his debut essay collection. He lives in New York City with his wife and pug. 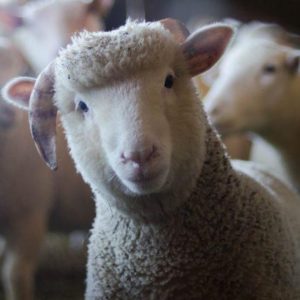 Humans are good mind-readers. So good, in fact, that we even manage to read thoughts where there are no thoughts to be read....
© LitHub
Back to top