As Pierce’s legal career blossomed, Hawthorne also began making a name for himself. In 1829, four years after graduating from Bowdoin, he published his debut novel, Fanshawe, but insisted on anonymity because he doubted its literary value. The novel was set in a small country college much like Bowdoin, and one of its chief protagonists, Edward Walcott, greatly resembled Pierce: a man with handsome features and the social grace that enabled him to move easily through “polished society” despite his “youthful follies [that] sometimes, perhaps, approach[ed] near to vices.”

Then, in 1837, Hawthorne finally achieved a hint of literary prominence with the publication of Twice-Told Tales, a collection of eighteen short stories. The collection nearly sold out, earning the author praise for his “fine moral tone” and “the sedate, quiet dignity displayed in his diction.” Yet, despite the positive reviews and early strong sales, Hawthorne ultimately earned little to no money from the endeavor, foreshadowing a trend that would recur throughout his literary career. Nor did it lead to any of the stable editorial jobs that he craved. His life suddenly seemed to be at a standstill precisely when it should have been skyrocketing.

Still a US senator at the time, Pierce recognized his friend needed a boost, and he schemed with his old Bowdoin classmates Cilley and Bridge to help Hawthorne secure a federal appointment to serve as historian on a South Sea expedition recently authorized by Congress. Hawthorne eagerly accepted the offer, confiding to poet Henry Wadsworth Longfellow (another Bowdoin pal) that he felt secluded and in need of adventure: “I have not lived, but only dreamed about living.” Though Bridge warned Hawthorne not to get his hopes up, he reassured him that Pierce would never rest until he had helped his friend. Through no fault of Pierce’s, the job never materialized, leaving Hawthorne even more frustrated and broke.

Hawthorne did, however, find more success in his romantic life. In 1838, he met the transcendentalist and illustrator Sophia Peabody, and they became engaged the following year. Two years later, just before Pierce left the Senate, Hawthorne (still unwed) ended up moving to Brook Farm, a utopian commune founded by Unitarian minister George Ripley, where he would meet the transcendentalists Ralph Waldo Emerson and Henry David Thoreau. Though Hawthorne did not agree with transcendentalism, he thought that living at Brook Farm would help him save money to marry Sophia and also give him time to write. Very quickly, though, Hawthorne realized he had made a big mistake. His designated job was to shovel and transport manure, an ordeal that left him with blistered hands and little time for writing.

The solitary Hawthorne also detested the required social activities. According to another resident, Georgiana Kirby: “No one could be more out of place than he in a mixed company. . . . He was morbidly shy and reserved, needing to be shielded from his fellows.” After just six months, Hawthorne left Brook Farm—disillusioned, exhausted, and still broke.

Through Pierce’s generosity, Hawthorne likely avoided falling into even deeper despair—a twist of fate that would be repeated in years to come.

His misery at Brook Farm, however, convinced him that he should move forward with marrying Sophia. They married in July 1842, then moved to Concord, Massachusetts, to settle down. They would go on to enjoy a long and happy marriage, but Hawthorne continued struggling to make ends meet—that is, until Pierce intervened. In 1844, Pierce and Bridge came to visit Hawthorne; the sight of them entering the home, recalled Sophia, resembled that of “two ministers of providence” who had arrived to save the couple from financial ruin. Bridge immediately loaned the newlyweds $100, while Pierce started discussing possible job opportunities in the federal government.

Since Hawthorne was a Jacksonian Democrat, Pierce knew he could help his friend by exploiting his political connections—crucial during a time when public offices were still awarded according to the spoils system that had flourished under Andrew Jackson. This time, the job would not fall through. Pierce happened to be campaigning hard for James K. Polk, a friend from Congress who was launching a dark horse bid for the presidency. It took more than a year, but once Polk landed in the White House, Pierce made sure to secure Hawthorne a position as surveyor for the Customs Collection District of Salem and Beverly. The post didn’t make Hawthorne rich, but it finally gave him financial stability and, more important, the opportunity to continue plying his craft. Through Pierce’s generosity, Hawthorne likely avoided falling into even deeper despair—a twist of fate that would be repeated in years to come.

Meanwhile, Polk also tried to reward Pierce with several patronage positions, including an appointment as US attorney general. Pierce turned down the summons, instead asking Polk to give him a commission to fight in the Mexican-American War, which had just erupted in April 1846. Knowing how vital military service had been to his father’s political rise, Pierce quietly began eyeing his own return to politics, no matter what he had sworn to Jane. And President Polk did not hesitate to repay Pierce’s past campaign favors.

Less than a year after the Mexican-American War broke out, Pierce began serving as a brigadier general in charge of volunteer regiments from New Hampshire, some 2,500 men all told—even though his sole military experience dated back to his unofficial role as “Captain” of the Bowdoin Cadets. Dispatched to the Mexican port of Vera Cruz, he led his troops on a harrowing, 150-mile journey through enemy territory to reinforce General Winfield Scott’s forces with much-needed troops, supplies, and munitions. Much of the time, though, freak injuries and illness kept him from fighting in the most critical battles. During the Battle of Contreras, Pierce was thrown off his horse, then passed out in pain from his injured leg—a detail his political opponents would later seize upon by nicknaming him “Fainting Frank.” Nonetheless, in late 1847, Pierce arrived home to a hero’s welcome and resumed his law practice, reinstating his promise to Jane that he would never again pursue public office. 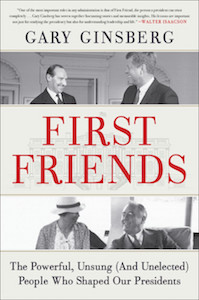 Excerpted from FIRST FRIENDS: The Powerful, Unsung (And Unelected) People Who Shaped Our Presidents. ©2021 Gary Ginsberg and reprinted by permission from Twelve Books/Hachette Book Group. 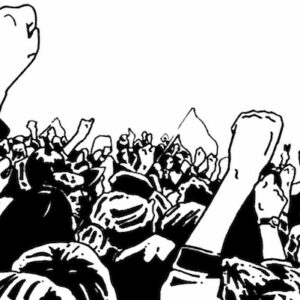 In various forms of political activism, we see a preoccupation with the small scale and local actions. This focus on small...
© LitHub
Back to top
Loading Comments...