For at least the past 50 years, universities have been the epicenter of protest against injustice and authoritarian overreach. Consider, for example, their unique role in the antiwar movement of the 1960s. Where speech is a right, propagandists cannot attack dissent head-on; instead they must represent it as something violent and oppressive (a protest therefore becomes a “riot”).

In 2015, the Black Lives Matter movement in the United States, protesting police brutality and racial inequality, spread to university campuses. Given that Black Lives Matter began in Ferguson, Missouri, it is no surprise that the first campus it touched was the University of Missouri. Concerned Student 1950 was the name of the Missouri student movement, named to evoke the year in which the University of Missouri was desegregated. Among its aims was to address the incidents of racial abuse that black students faced on a regular basis, as well as addressing curricula that represented culture and civilization as the product solely of white men. The media largely ignored these motivations and, representing protesting black students as an angry mob, used the situation as an opportunity to foment rage against the supposed liberal political excesses of the university.

Fascist politics seeks to undermine the credibility of institutions that harbor independent voices of dissent until they can be replaced by media and universities that reject those voices. One typical method is to level accusations of hypocrisy. Right now, a contemporary right-wing campaign is charging universities with hypocrisy on the issue of free speech. Universities, they say, claim to hold free speech in the highest regard but suppress any voices that don’t lean left by allowing protests against them on campus. Most recently, critics of campus social justice movements have found an effective method of turning themselves into the victims of protest. They contend that protesters mean to deny them their own free speech.

“Where speech is a right, propagandists cannot attack dissent head-on; instead they must represent it as something violent and oppressive (a protest therefore becomes a “riot”).”

These accusations extend into the classroom. David Horowitz is a far-right activist who has been targeting universities, and the film industry, since the 1980s. In 2006, Horowitz published a book, The Professors, naming the “101 most dangerous professors in America,” a list of leftist and liberal professors, many of whom were supporters of Palestinian rights. In 2009, he published another book,

One-Party Classroom, with a list of the “150 most dangerous courses in America.”

Horowitz has created numerous organizations to promote his ideas. In the 1990s, Horowitz created the Individual Rights Foundation, which, according to the conservative Young America’s Foundation, “led the battle against speech codes on college campuses.” In 1992, he founded the monthly tabloid Heterodoxy, which, according to the Southern Poverty Law Center, “targeted university students whom Horowitz viewed as being indoctrinated by the entrenched Left in American academia.” Horowitz is also responsible for Students for Academic Freedom, which was called the Campaign for Fairness and Inclusion in Higher Education when it was introduced in 2003. The goal of Students for Academic Freedom is to promote the hiring of professors with conservative worldviews, an effort marketed as promoting “intellectual diversity and academic freedom at America’s colleges and universities,” according to Young America’s Foundation. For the past several decades, Horowitz was a fringe figure on the American far right. More recently, his tactics and aims, and even his rhetoric, have moved into the mainstream, where attacks on “political correctness” on campuses are now commonplace.

The Trump administration has aggressively pursued Horowitz’s agenda. Deputy associate attorney general of the US Department of Justice, Jesse Panuccio, began a speech at Northwestern University on January 26, 2018, by declaring campus free speech “a vitally important topic, and, as you are probably aware, one that Attorney General Sessions has made a priority for the Department of Justice. It is a priority because, in our view, many campuses across the country are failing to protect and promote free speech.”

Trump’s presidential campaign is sometimes described as one long attack on “political correctness.” It is not accidental that the rhetoric of the Trump administration, in particular its attacks on “political correctness” and its use of free-speech rhetoric, overlaps with the talking points of some of the well-funded institutions that have arisen to attack and delegitimize universities as bastions of liberalism. There are links between Horowitz’s main organization, the David Horowitz Freedom Center (DHFC), and the Trump administration, especially with its members on the far right. According to an investigation by the

Washington Post published in June 2017, the DHFC has supported political operatives whose aim has been to destabilize establishment Washington politics, tilting it to the far right, including Attorney General Jeff Sessions, senior policy adviser Stephen Miller, and Stephen Bannon. According to the article, on December 14, 2016, “Horowitz expressed happiness about Trump’s victory and said Republicans had finally woken up to his approach to politics,” denouncing leftists as enemies of free speech.

“Fascist politics seeks to undermine the credibility of institutions that harbor independent voices of dissent until they can be replaced by media and universities that reject those voices.”

Horowitz counts at least 11 (one-time) members of the Trump administration as supporters of the DHFC, including Vice President Mike Pence, Sessions, Bannon, and Miller, whom Horowitz legitimately describes as “a kind of protégé of mine” (the article documents Horowitz’s lengthy support for Miller’s career). The center has been deeply involved in the careers of senior Trump administrative officials for many years, and according to the Post’s investigation has long served as a sort of informal gathering place for the far-right members of the administration.

Horowitz’s free speech attacks on universities lack legitimacy. Given the formal protections of academic freedom, universities in the United States host the freest domain of expression of any workplace. In private workplaces in the United States, free speech is a fantasy. Workers are regularly subjected to nondisclosure agreements, forbidding them to speak about various matters. In most workplaces, workers can be fired for political speech on social media. Attacking the only workplaces in a country with genuine free-speech protections using the ideal of free speech is another instance of the familiar Orwellian nature of propaganda.

In January 2017, Missouri state representative Rick Brattin amended a bill he had previously introduced to the state legislature to ban tenure at all of Missouri’s public universities. After calling tenure “un-American” in an interview with

The Chronicle of Higher Education, Brattin added, “Something’s wrong, something’s broken, and a professor that should be educating our kids, should be concentrating on ensuring that they’re propelling to a better future, but instead are engaging in political stuff that they shouldn’t be engaged in. Because they have tenure, they’re allowed to do so. And that is wrong.” When Brattin was asked whether he was concerned that eliminating tenure would damage academic freedom and lead to professors losing their jobs for political reasons, he responded by asking in what other profession people have that freedom and why academia should be a special case. The work that scholars produce may necessarily have political implications, depending on the field. Attacks from the right make clear the right wing’s own desire to control acceptable lines of inquiry. In the classic style of demagogic propaganda, the tactic of attacking institutions standing up for public reason and open debate occurs under the cloak of those very ideals. 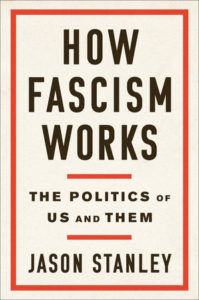 From How Fascism Works: The Politics Of Us And Them. Courtesy of Random House. Copyright © 2018 by Jason Stanley.

Jason Stanley is the Jacob Urowsky Professor of Philosophy at Yale University. He was previously Distinguished Professor in the Department of Philosophy at Rutgers University. Stanley is the author of Know How; Languages in Context; Knowledge and Practical Interests, which won the American Philosophical Association book prize; and How Propaganda Works, which won the PROSE Award for Philosophy from the Association of American Publishers. He is a frequent contributor to The New York Times, The Washington Post, and The Boston Review, among other publications. His latest book, How Fascism Works: The Politics Of Us And Them is out now from Penguin Random House.

So a Writer and a Comedian Walk Onto a Stage... 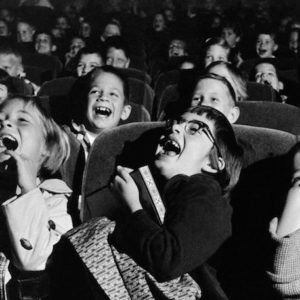 So a Writer and a Comedian Walk Onto a Stage...

As someone who strives to write comedic fiction, I spend a great deal of time thinking about why I find certain things funny—and...
© LitHub
Back to top
Loading Comments...