The State Hermitage Museum, gem of Saint Petersburg, pride of imperial and Soviet Russia. Founded by Catherine the Great, Russia’s longest ruling woman, and containing one of—if not the—largest art collections in the world. Egyptian antiquities, Italian renaissance, Dutch masters, impressionists, cubists, the canon of the art world housed in six buildings, including the Winter Palace, a 460-room mansion built for Catherine herself.

Now imagine the Hermitage in the context of forty degrees below zero, no electricity, no running water, frozen and bursting sewage pipes, air raids and bombings, anti-aircraft guns, shelling, destroyed buildings, rats, starvation in the hundreds of thousands.

Imagine the grandiose halls hung with empty frames: valuable art shipped away for protection while Hermitage staff hide in the basement next to the frozen corpses of their colleagues. Imagine curators and art historians giving tours to sailors, describing absent paintings from memory in exchange for scraps of charred bread. Imagine skin papery from thirst, gums rotting from scurvy and dystrophy.

A scene so surreal it can only be real. This was the Siege of Leningrad, September 1941 to January 1944, when Nazi Germany blockaded the city and kept it in a state of total deprivation, aided by Soviet negligence and resource-hoarding.

The siege contains within its 872-day duration all the cruelties and ironies of Soviet life. For contemporary Russian writer, scholar, and poet Polina Barskova, this particular history symbolizes Soviet mythology, deceit, and hollow grandeur—and the traumatic tension between public and private memory.

Barskova’s latest releases translated into English look at the Siege to resurrect the dead and through the Siege to comprehend other horrors, both personal and collective. Air Raid is a book of polyphonic poetry (Ugly Duckling Presse, October 2021, tr. Valzhyna Mort), and Living Pictures is a collection of short prose, including historical fiction, autofiction, and a surrealist play (New York Review Books, September 2022, tr. Catherine Ciepiela).

Not every horrible thing causes trauma—that’s one thing our contemporary discussions get wrong.

Both books contrast mournful private (and often secret) recollections with triumphant, euphemistic, and forgetful public commemoration. Versions told by autocrats and family men trample diary entries and letters. Stories, or rather silences, around the Siege have haunted Leningrad-native Barskova her entire life. Here, as a writer and archivist, she turns that haunting inside out to examine the very nature of trauma and survival.

In Air Raid poems, bodies become street decoration: Corpses were often left on the ground in winter, wrapped in colorful sheets (“by the corpses in amber, by the corpses in turquoise”) so that they’d be easier to find come spring when collected by the “truckload.” Bodies also become food cravings: “Which stranger / passed by the snowbank she was frozen into. / Her galoshes stuck out like two prunes on a wedding cake.” Other Air Raid poems speak in the voices of blockade diarists who live amidst a new landscape: “We step over the corpses / We run over the corpses we hide under the corpses / as if it were a common thing.”

The dead even seep into contemporary sections of Living Pictures: “Maybe we’d pathetically caress each other again, or maybe we’d die instantly, like the homeless during an early freeze, and they’d collect our bodies in the morning.”

There’s no way to reference the Siege without talking about food. In both books, hunger for anything that even remotely resembles food illustrates the shame of blockade life. One speaker in Living Pictures describes in halting lines: “…throbbing you lick the bowl clean weep scan the table howl lick again.” Another laughs at how eating coffee grounds has become a rare treat. In Air Raid, one resorts to “chew[ing] on iron” and all six parts of a string of poems are spent in a panic: “Ration cards missing! / Ration cards missing!”

Another ugly truth of blockade life, unspoken in official versions, is lice. They are invisible characters in the final installment of Living Pictures, a short play about that very Hermitage scene. Two lovers slowly starve and go mad—they’re not “essential workers” deemed worthy of ration cards. One character already knows that Party officials and Hermitage employees are living and dying two totally different versions of the story: “The living have lice, and the dead, too. If there’s one thing that unites us during the blockade, it’s that. They bite at Party headquarters, and they bite us here in our basement.”

In no other moment during our lifetimes has this cruel dissonance been clearer and more devastating than the current Russian invasion of Ukraine.

Euphemisms paper over these gruesome details and the eventual million deaths. In the official rendition of the Siege, Leningrad’s victims were selfless heroes who enabled Soviet victory over the Nazis. A poem in Air Raid renders radio broadcasts with their lofty sloganeering: “Geopolitics! Teutons at the border! / Fire and infestations of Reich!” In the play at the end of Living Pictures, a character complains: “…they just go on about the same thing—victorious battles and the defenders’ valor. Don’t look here, look over there!” The pivoting neck, the whiplash of looking at and away from atrocity, is the aftermath of state-compliant storytelling.

It’s not just radio broadcasts that blare and rattle off lies. Motifs of opera and theater recur in Barskova’s poetry and prose, a nod to the Soviet penchant for making everything heroic and displaying it on the backdrop of a red velvet curtain with the twin silhouettes of father Lenin and father Stalin. For Barskova, these Siege retellings become a kind of circus, the wild black bear now subdued and balancing a pink ball on its nose. We all clap. In Mort’s translation, the melodramatic Siege aria becomes “Blockade the Musical,” America’s closest equivalent to the Soviet triumphant genre.

When applying Siege logic to a contemporary narrator managing American life, the story again becomes about public versus private. In Living Pictures, an unhoused individual taking a shit in a San Francisco metro station becomes a “changeling of the ‘public-private,’” a rift between what’s supposed to be seen and what’s not.

These collections bring to mind Grace M. Cho’s Haunting the Korean Diaspora: Shame, Secrecy, and the Forgotten War, a work of scholarship, fiction, sociology, literary criticism, and personal memory. Cho examines starvation, deprivation, and state violence during the Korean War, a conflict that implicates both the United States and the Soviet Union. Of the secrecy surrounding Korean women forced into sexual labor with U.S. service men, Cho writes: “not seeing is not done innocently.”

Even a children’s playground is not innocent. Barskova and her childhood friends always played in Victory Park, but no one talked about how those very same grounds were used to house, burn, and bury the bodies of Siege victims. Victory begat on the backs of mass graves, children’s swings planted in the soil of the dead. But Barskova will not let them be forgotten or erased: “flying along with us, were those somber blockade children.”

These things are too ugly for history. As one Air Raid poem warns:

Watch this clean-freak of an epoch
wipe us up like dust, to the last speck of us,
a lesson to others not to look in tears at a creature,
plagued, pockmarked.

As Eugene Ostashevsky writes in the forward to Living Pictures, Soviet (and contemporary) public memory recast the horrors of the Siege as “voluntary contributions towards the purchase of victory.”

What Soviet dictators could not anticipate is how denial breeds the obsessive writing and researching of subsequent generations. Cho describes the ghosts of unaddressed trauma as “irrational,” “schizophrenic,” and “incoherent,” but also “creative” and containing “productive potential.” As narrator and guide through these two books, Barskova makes the unprocessed grief come alive. She spins it into non-narrative and non-linear poems and prose, a pastiche which mimics the very nature of traumatic memory: disassociated and halting. Barskova mobilizes the ghosts and secrets to shine a floodlight on other histories of abuse.

Victory begat on the backs of mass graves, children’s swings planted in the soil of the dead.

Not every horrible thing causes trauma—that’s one thing our contemporary discussions get wrong. For some people, a violent event can be metabolized and reflected upon down the road as “that one time.” For others, the same exact violent event leaves behind nightmares, flashbacks, full-body stiffness, and illness.

Events and experiences can become traumatic when they exceed human capacity for understanding. When people do not have trusted adults willing or able to hold them, see them, hear them, honor their feelings, let them process. When the event repeats with impunity. When the nervous system never returns to a resting state. When people are surrounded by silence or an entire deceitful system.

It’s in this gap that trauma lies. Loud monuments, parades, and flags drown out and deny the dystrophics, the bodies under snow, the mass arrests and purges. Eugene Ostashevsky describes it as “a kind of traumatic hypocrisy.”

In no other moment during our lifetimes has this cruel dissonance been clearer and more devastating than the current Russian invasion of Ukraine. President Vladimir Putin has claimed that the occupation is needed to “de-Nazify” the country, whose rulers are supposedly teeming with neo-fascists. Meanwhile Ukrainian refugees number in the millions, including half of all the country’s children, and civilian deaths number around 13,000, though reliable figures are difficult to come by.

These contemporary crimes are only possible in a society that has no collective understanding, let alone collective responsibility. World War II is called “The Great Patriotic War,” and in the country’s imagination, Russia was the liberator of Europe and all the sacrifices were just an aside. Neither the mass starvation and destruction in Leningrad, nor the massacre of 20,000 Polish officials in Katyn, nor the occupation of the Baltic States, nor Russia’s non-aggression pact with Hitler earlier in the war were a problem—the ends justified the means.

Russia today wants to turn collective trauma into collective amnesia. Instead it’s time for a new mythology and new leadership. When interviewed for The Atlantic earlier this year, Ukrainian President Volodymyr Zelensky reiterated this sentiment: “[Russians] are afraid to admit guilt… they have to learn to accept the truth…[they need] leaders who can then come in and say, ‘Yes, we did that.’”

What’s needed now more than ever is an end to euphemism. I look to the activists, writers, and artists, many in exile or living abroad like Barskova, who continue to push for an honest discussion of Russia’s role in the world, then and now.

Tanya Paperny is a writer, editor, translator, educator and community builder in Washington, DC and winner of the 2021 Hazel Rowley Prize from Biographers International Organization. More at tpaperny.com. 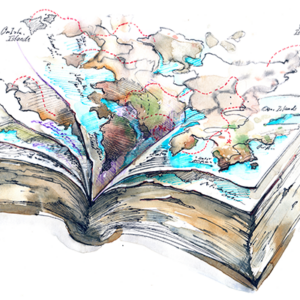 Where would we be without translators, that linguistic bridge between countries and cultures? To celebrate National Translation...
© LitHub
Back to top