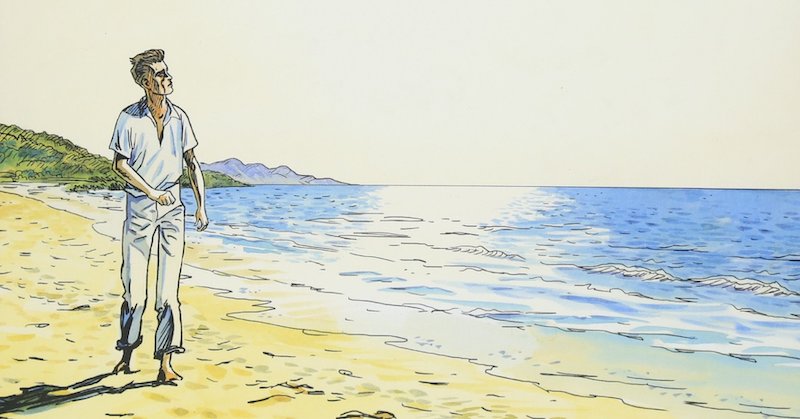 When Albert Camus was sick, his buddies set the gold standard for socially distant friendship.

As people around the world revisit classic examples of “lockdown literature” and writing about plagues, including, most obviously, Albert Camus’ 1947 novel, it’s worth remembering that even during protracted periods of global uncertainty and pain, people like Camus were just, well, doing their best to go about their lives.

Exactly 78 years ago today, right in the middle of World War II, a struggling Camus received favorable news. As Oliver Todd describes in his biography of the author, on April 23rd, 1942, the French publisher Gallimard sent Camus a contract for the book we now know as The Stranger. A week after that, Camus received a nice advance, “which was enough to live on for three months and to pay for a trip to France.”

Camus had been living in isolation as he suffered from tuberculosis, a disease he’d been diagnosed with at the age of 17. Pascal Pia, a fellow Frenchman who’d met Camus during their newspaper days, was honestly setting the gold standard for how to be a great, socially distant friend.

Todd writes that Pia “wrote constantly to break his friend’s isolation and get him back in touch with work and with France. Pia was still looking for jobs for Camus, such as forestry agent, in a healthy region.”

Pia was such a good friend, in fact, that he was the one who negotiated a higher initial payment for Camus’ work on The Stranger.

Another friend who showed his solidarity was the French-Algerian author Emmanuel Roblès. Roblès showed his empathy differently, smuggling non-perishable foods and wine to Camus from Morocco and telling him about how his wife was going through something similar, “stricken with typhus, like hundreds of thousands of Algerians in 1941-42.”

Camus was one of those people who worked through his personal horror by actively seeking to learn about other people’s experiences, so it turned out Roblès was doing him a favor.

Camus would reflect years later, in his private writing, on the experience of sickness and isolation as he worked out his thoughts about absurdity:

Living with one’s passions also means living with one’s sufferings—which form a counter-weight, a corrective, a means of balancing and paying for them. When a man has learned—and not on paper—to remain alone in the intimacy of his suffering, to overcome his desire to run away, the illusion that other people can ‘share,’ then he has little left to learn.

All this to say, if you’re feeling down in quarantine, find yourself a Pia or a Roblès. Real friends either take your brilliant idea and capitalize on it for your benefit or send you care packages of wine, rice, and noodles. Alone, but together.