In his home in Bologna, Alessandro Armaroli has waited for the coronavirus pandemic to pass while looking for silver linings. “Perhaps, hopefully, it will bring something good,” he said. Armaroli is a lawyer, but since all of Italy was put under lockdown on March 10, he has hardly spent any time in his office or in court—he works from home, reading, getting informed and studying trials.

“I thought of Don Abbondio’s broomstick,” he said, quoting a character from Alessandro Manzoni’s The Betrothed, a priest that finds that his persecutor has died of the plague. He quotes: “This plague has been a great scourge, but it has also been a broomstick, sweeping away some characters that […] we couldn’t get rid of.”

These are dissonant times in Italy. Since the beginning of the lockdown, cities have been so calm that you can hear birds hum or bicycles creak, a calm punctuated only by residents clapping their hands or singing on their balconies to raise their spirits. But a traumatic war on the disease rages in the hospitals. Patients are in situations so dire that doctors are saying that they, themselves, hope not to die. Medical staff scramble to free up more ICU beds every day, but no matter their efforts, the number of infected patients hospitalized each day means that “there is always the same number of beds available” at the end of the day, one doctor told me, discouraged. In some towns in Lombardy, the region where Milan sits and where I live and work, so many people have lost their lives that funeral parlors say they are at breaking point and priests have decided to let bells knell only once a day to shield communities from too much trauma.

Trauma is everywhere in Italy, and yet Italians are still turning to traumas of the past—in particular, to The Betrothed. Social media is awash with references to and quotations from the novel, both real and fake. So are headlines: “The Betrothed describes our society,” one reads. “It’s not a coincidence that The Betrothed is one of the most quoted books these days,” reads another. All signs that in a times of crisis, people are still turning to narrative as their compass to interpret a difficult present.

For days, as I’ve been reporting for various outlets on the coronavirus epidemic while it took hold across Italy, I’ve become obsessed about finding out the one reason why many people were turning to The Betrothed. Was it the Catholic sense of morality that permeates it—a warning to have your heart in the right place and trust in God’s will in bad fortune? To learn from the old pandemic? To take moral revenge against who we think are the villains, and show how in the novel, they are defeated?

During the past week, unable to meet with anyone because of the lockdown, I phoned Italians who, like Armaroli, were quoting or revisiting the book. Whenever I mentioned I was calling from Milan, there was always a moment of hesitant silence, as if to acknowledge the gravity of the coronavirus outbreak.

“At the root of it, there’s our fear, and when fear is depicted in such an authentic way, we can exorcise it.”

It makes sense for people to return to what they know intimately at a difficult time, and The Betrothed is deeply ingrained in Italian popular culture, where its role is hard to overstate; it’s perhaps second only to Dante’s Divine Comedy. The historical novel is compulsory reading in schools across Italy, where students dissect it for a full school year. The prominence of Manzoni is such that many schools—including the one I attended—are named after him in Italy, while his characters, like Don Abbondio, became so popular in popular culture that even the Pope has occasionally referenced them in sermons.

Forced by the lockdown to work from home, Riccobono has included the novel in her course this year and was uploading handouts for her students when we spoke. (She uploaded them to a personal blog after her university’s platform crashed repeatedly from overuse.)

The plot of The Betrothed is far from a Hollywood storyline. Renzo and Lucia—the two titular betrotheds—want to marry, but local squire Don Rodrigo, who wants Lucia, threatens the cowardly prelate, Don Abbondio, not to celebrate the couple. They are forced to flee, their unwavering love tested by a long series of daunting challenges, until the plague arrives in Milan, killing Don Rodrigo but sparing the heroes.

Most readers said the chapters about the plague, when Manzoni abandons his characters to tell the history of how the plague arrived in Lombardy, seemed the most realistic to them. In the book as in now, Lombardy was the main area of an initial outbreak. Then, like now, the disease arrived from abroad, Italian politicians (like the Spanish kingdom that ruled over Milan at the time of The Betrothed) were slow to react—and waiting facilitated the contagion. The population first ignored or denied the problem, then became overly suspicious about foreigners, then panicked.

“In those pages there is already everything [that we are living today],” Domenico Squillace, the principal of the Volta high school in Milan, wrote to his students in an open letter when the government decided to suspend schools on 24 February. “The certainty of the dangerousness of foreigners, the violent conflict among authorities, […] the uncontrolled rumors, the absurd remedies, the raids for goods of first necessity, the health emergency… More than from Manzoni’s novel, they seem like pages that came out of one of today’s newspapers.”

In other cases, readers took to the book not only to learn historical facts and predict the outcome of the pandemic, but to draw lessons. After the historical descriptions, Manzoni follows Renzo as he enters Milan and observes harrowing scenes—lynching attempts, grieving mothers, and quarantined families left without food, with their doors nailed against the wall to block them in.

Squillace told me that the parallel was useful because he thought it would teach his students a valuable lesson: when a pandemic strikes, he says, it’s easy to lose our humanity. “The risk,” Squillace said, “is that seeing the enemy everywhere poisons our life, our social interactions, barbarizes civil living.”

Luca Napolitani, a reader from Teramo, in central Italy, said what most fascinated him was the fact that the book’s ending showed how pandemics could be great levelers—when the plague hits, wealth and class don’t matter. “Even pious Lucia is ‘hardened’ by life towards the end of the book—a sign that hardships can test everyone, even those with strong religious values.”

Tiziana Benedetti, a retired elementary school teacher, told me that she found the novel’s most realistic character to be the aristocrat and intellectual Don Ferrante, a man who devotes most of his time to obscure studies, authors and disciplines. When the plague outbreak reaches Milan, he refuses to acknowledge it, instead formulating perplexing astrological and philosophical theories to account for reality. “He reminds me of the intellectuals of today who denied that the coronavirus was dangerous,” Benedetti said. “They live a life that is very far from everyday reality.”

We want to know how it ended for them and how it will end for us.

It struck me that the character she was drawn too, like Don Abbondio’s broomstick and the suffering that tests everyone equally, was one that expressed the most poetic justice and irony: at the end, Don Ferrante dies, killed by the plague he tried to refute.

Meanwhile, as I had these conversations, I got closer to the epidemic. I spoke to the doctors on the frontlines and to the infected, to the people whose life is suspended by the lockdown and to the scientists trying to account for why this happened in Italy. And I realized that all these people would take to the book for very different reasons—finding a unifying one was always a doomed mission.

Professor Riccobono agreed; some might look for moral guidance or comfort, others may be trying to understand the reaction to the current pandemic through the mistakes of the book’s characters, and others are drawn to it simply because it was the pandemic-themed story they knew best. In almost all cases, though, reading The Betrothed was a defensive instinct, Riccobono said. “At the root of it, there’s our fear, and when fear is depicted in such an authentic way, we can exorcise it,” she said.

As another deadly pandemic takes hold, she said, turning to the old stories we know satisfies a primal impulse. We want to know how it ended for them and how it will end for us.

Alessio Perrone is a freelance writer and journalist based in Milan, Italy. His writing about current affairs and travel has appeared in publications including The Guardian, Columbia Journalism Review and Wired UK. You can find him online at alessioperrone.com and on Twitter @alessioperrone 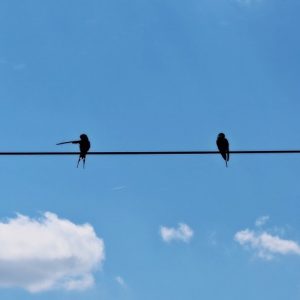 I want to tell three stories. In order to preserve the privacy of the people here described, I’ve changed a very few details...
© LitHub
Back to top