Let’s start in a place called the Paradise. It was cold damp on the outside, warm dark on the inside, this, a March night at the Boston rock club, nearly a decade ago. The musician Richard Buckner was set to play and as the club filled with bodies, he prowled. A tall broad man in boots, hair to his shoulders, he moved through the space as if in solitude. Some people have more aloneness about them. It’s not a sad thing or a flaw, but rather a quality, like a sense of humor or the ability to draw—partly there from the start, partly practiced as a result of experience. Who knows how much comes from where? Origins can be hard to pin down. Some people have secured themselves against the need to flee their own aloneness, and as a result are better able to ask the important questions of themselves. Richard Buckner is like this.

Buckner put out his first album, Bloomed, in 1994. He roamed across the country, he toured and played, some songs gentle, some fierce, a heat behind them all… And no one has a voice like Buckner has a voice: mountains, storms, night highways, floods, cemeteries, drafts in an empty room, embers, timber. There were marriages, jobs driving a warehouse forklift, holding up a traffic sign, a tangling up with a headless body in a burnt-out car, a movie score, a break-in. He put out ten more albums, put over 600,000 miles on his Tacoma. And now he has written a book, a collection of poetry born of all this movement, of the times in-between, of the search, ongoing, for new starts. But Cuttings from the Tangle (Black Sparrow) is not the work of a road-weary musician dabbling in another form. This book confirms a truth hinted at all these years in the language of his lyrics: Buckner is a writer.

The 50 pieces in the book are experienced less as discrete, stand-alone poems, and more as accumulation, a gathering of moments and noticings—what a fantastic noticer Buckner is—small stories collecting into a larger one that shimmers with life. “Nonfiction clippings in prepared formations,” he calls them in a note before the book begins.

Traveling the road alone, there’s plenty of time to think, time for questions: How did I arrive here? What miracle of luck? What error in judgment? What collection of impulses in me from the start? And maybe most important: Where do I go now?

In one of the early pieces in the collection, “(*Fallen),” Buckner uses the (*) symbol to stand in for each use of the titular word: “all of us are (*,) . . . lying in the shared (*) blame of being . . . fighting back (,*,) as the clashing hounds round up the risen.” The symbol holds the emptiness, the abyss, and the puckered aperture to fall into or out of, depending on the day.

Buckner concerns himself with moments of illumination, when everything’s torched up and flared into focus. The lines hold “dancing lightshow flashes,” “sputtering lamps / burning soundly,” “shared passages, lit with disowned illumination,” “shapes burned into silhouette,” a bonfire, a pyre spit, a bedside light, the taillight glow of cigarettes. He’s attuned to the fleeting flames of anger, shame, disgust, desire, regret, love, and fear. These pieces, like his songs, swing between tenderness and contempt.

The writing itself feels like an act of questioning, of staying awake.

He writes of the “generational imposters / and expense account floaters / looking out from the bar over unplanned families, / unable to tell the shoats from the rutters.” Questions come, and accusations, too, aimed at others and himself. One gets the sense Buckner understands the fire inside as gift and burden both. (At a show in Cambridge, Massachusetts, he kicks his guitar case against the wall. In a basement club in Somerville, he grabs his jacket off a chair and leaves without playing a note.) In those flood-lit moments, everything in focus, sometimes it hurts to see. Every now and then we’re offered a flash of clarity and the question then becomes, if you are able to ask it, What do you do with what you’ve come to know? The answer, Buckner seems to say, has to do with moving forward.

One form that takes is escape—which is also the title of a song of his I love that contains the lyric fragment “falling as we run.” He returns to this syntax in the book: “snapping back as they shun”; “laughing as they crash”; “bristling as we stand”; “wheezing as they weep”; “moaning as you hug”; “returning as we left.” I mentioned memories, but this book doesn’t have the feel of a man gazing in the rearview mirror. The repeated use of the –ing gives the collection the bending present of dream, the past not a distant thing, but right here with us in continuous aspect, informing what we see, how we see it, and what we choose to do with it. Here, from a single poem called “as one,” a sample: waiting seizing accepting expanding whispering retracing melting staring zoning departing breathing looping shrieking unsettling speeding rising hushing spouting dispersing winning touching lasting slobbering listening shooting pissing wheezing reminiscing napping hungering serving groping paying seeing overfeeding screaming scribbling charging kicking wincing sightseeing ever-shifting playing gurgling strutting chain-caroling.

A simultaneity to it all, not the woo-woo sense of the now, but the collapsing of present-past, “as if foretelling a past . . . left in a tangential present.” Once upon a time right now.

Buckner’s a storyteller, too. Time was he’d get on stage and loop the sounds so there’d be no breaks between songs, no obvious place to clap, no interaction—or acknowledgement—that he was up there and we were down here listening. He’d play his dark and dreamy songs, eyes half closed, as though he was the only person in the room. Something shifted over time and in between the songs he began to tell stories about motels (“$49 is my budget because otherwise nothing interesting happens”), figure skating, ham, other surrealities from the road.

At the Mercury Lounge, somewhere in the 20teens, looking younger than the last time I’d seen him, he told us about the pleasures of being back in New York City, how he’d exited his hotel that morning to find that a VCR had been executed on the sidewalk, hung from a noose in a tree, with a heap of pajamas beneath it. The story-moments don’t end in punchline or epiphany; they register as the way it feels to remember a dream. His eyes are open to the absurd, the moments that take a minute to catch up with you, and longer to detangle. He’s a master at capturing the intersection of funny-sad, and whether he finds himself in these situations more than most, or his vision is better aimed to see them, who knows, it’s probably a combo, and again, it’s hard to say what comes from where. The questions keep on coming.

What now? The Pitchforkers and their ilk use words like alt-country, electric folk, misty enigmas, elusive, oaken, painterly, slotting things into their slots because that is their job. I can’t speak to it. All I can do is tell you that Buckner’s voice, the sounds and the words that he makes, land in some deep-in spot in me, some place there since the start. When asked what sort of music do you like, I say his name, and behind it is a wordless force of feeling that has stirred me and keeps stirring in me as the years pass. In the nonfiction clippings here, the voice feels familiar and it feels new. The writing itself feels like an act of questioning, of staying awake, of looking out for something, not with optimism, necessarily, but with curiosity, an interest in what’s around the bend, because we can’t go back, can we?

Buckner knows we’ll never return to the unseparate paradise we arrived from. His album The Hill, released in 2000, takes some of the poems from Edgar Lee Masters’s Spoon River Anthology and puts them to music. These are voices speaking from the grave, and Buckner’s haunted, propulsive rendering, released as a single track, is rich with sorrow and revenge, lament and last-words fervor. Cuttings from the Tangle is the voice of one not from the grave but from the fleshed heat of aliveness, breathing stumbling stalling surging tonguing forgetting asking hollering retreating approaching, and reminding us of the departure in every arrival, the end in each beginning, that we are changed and changing, doubting as we trust, listening as we love, staying as we move, falling as we run.

Nina MacLaughlin is the author of the acclaimed memoir Hammer Head: The Making of a Carpenter, and the novel Wake, Siren. Formerly an editor at The Boston Phoenix, she has written for publications including The Paris Review Daily, The Believer, the Los Angeles Review of Books, The Wall Street Journal, Bookslut, The Daily Beast, Cosmopolitan, and The Huffington Post. She was also recognized in Refinery29's list of "21 New Authors You Need to Know." She lives in Cambridge, Massachusetts. 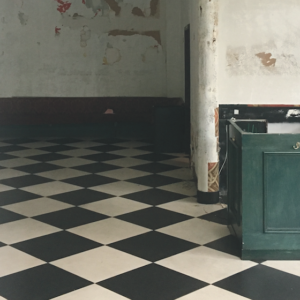 We are all guilty of vain. Who can claim not. I had patronized Dean and Deluca in SoHo since the 1980s, when it looked like...
© LitHub
Back to top