The Week in Literary Film and Television News

This week in literary film and television news, there was a lot of casting going on. There were also quite a number of new and exciting literary shows announced from a certain channel that is now in my very good graces (as if it wasn’t before): AMC. A literary show from a Buffy producer? Yes, please. Call Me By Your Name is getting closer and closer to a theater near you—though the trailer wasn’t nearly sexy enough for my tastes. On the other hand, The Dark Tower may now be too close. Reviewers would like it to back up a little bit. And a little bit more. Finally, we’re apparently going to find out which book America loves best. But not until we find out which books some celebrities love best. Will their picks influence ours? Who knows:

PBS has ordered a new eight-part documentary series, “The Great American Read,” in which celebrities—yes, celebrities—will talk about their favorite books, culminating in “a nationwide vote to choose America’s best-loved book.” PBS will pair the show with “a new community program to promote reading.” Sounds great—but I’m nervous about America’s taste level these days. I guess we’ll just have to wait and find out. I bet it will be whichever book Beyoncé chooses.

AMC is taking on a host of new literary adaptations: Sarai Walker’s novel Dietland will be adapted into a ten-part series for AMC by none other than Marti Noxon, of Buffy the Vampire Slayer fame. Eric Heisserer is adapting Ted Chiang’s short story “Liking What You See” into a series. Karen Thompson Walker will be a consultant on the adaptation of her novel The Age of Miracles, and Victor LaValle will co-executive produce the adaptation of The Ballad of Black Tom. I think it’s far to say that AMC is my new favorite channel.

Awesome: Annihilation, the Alex Garland-directed adaptation of Jeff VanderMeer’s novel of the same name, now has a release date. Natalie Portman will take us into Area X on February 23, 2018.

Alas, it appears that The Dark Tower, also known as my Idris Elba fix by way of Stephen King, is not very good.

The Divergent series has been demoted (or promoted, depending on how you look at it) to television. Ascendant, the fourth part of the series by Veronica Roth, originally slated for big screen treatment, is being developed by Starz—though it remains unclear whether its stars, including Shailene Woodley, would make the jump along with it.

Anne With an E, Netflix’s uneven adaptation of Anne of Green Gables by Lucy Maud Montgomery, has been renewed for a second season.

Regina Hall has joined Amandla Stenberg and Russell Hornsby in the upcoming film adaptation of The Hate U Give, the bestselling debut novel by Angela Thomas.

Michael Ironside will be appearing as J. P. Morgan in TNT’s TV adaptation of Caleb Carr’s The Alienist.

And Hayley Atwell will portray the wife of Christopher Robin (Ewan McGregor) in Disney’s Hook-style story of the A. A. Milne character.

In a bidding war, Starz has snagged the rights develop the adaptation of Stephanie Danler’s Sweetbitter, with Brad Pitt’s production company Plan B to producing. Danler wrote the script and will be executive producing.

Finally: it’s not Christmas, but we’re still getting a film adaptation of André Aciman’s luscious, sexy, Call Me By Your Name. Very important: apparently the peach scene made it into the film.

What Trying to Finish a Crime Novel Taught Me About Writing 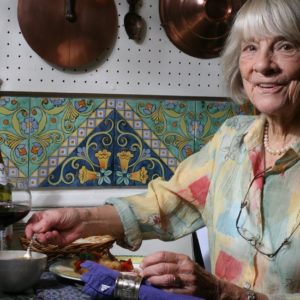 When Judith Jones saw Anne Frank on the cover of the French edition of her diary in 1950, she was sorting through a “pile...
© LitHub
Back to top