At this Trumpian moment, we have to come to a Vonnegutian conclusion

For those lamenting the giant leap backward represented by the Trump administration, I have only words to comfort you. They are not mine. They belong to Kurt Vonnegut, Jr.

Vonnegut’s writing spans our post WWII-world: the Cold War; the Gulf War; the struggle for civil rights, women’s rights, gay rights; the US destabilizing foreign governments to install its puppet regimes; 9/11 and its Bushian aftermath; the increased reliance on religious values to justify all sorts of xenophobia; and the rising denial of climate change.

The virtue of Vonnegut’s work is that it places the human predicament ahead of character-centric plots. Surprising, perhaps, given the fact that Vonnegut’s Slaughterhouse-Five is universally acclaimed as a masterpiece of post-modern narrative form. Vonnegut’s novels address one consistent theme more than most­—how society is unjustifiably biased in favor of dangerous myths and legends, and he closes his novels by challenging the veracity and usefulness of these dominating myths and legends. Thus, humanity’s eternal conflict: those who believe in magic and lore versus those who believe in verifiable knowledge. His books are about how we got to where we are and whether or not this is where we really want to be.

Some of Kurt Vonnegut’s most frequently expressed concerns are: What will mass automation do to the people on the factory floor? Are there no limits on the extent to which the powerful can shepherd the masses against each other, leading to horrible atrocities? How do swirling political, economic, and religious forces numb us to the more essential needs and wants of people?” He seeks the underlying truths of our will to relegate the powerless to the ravines of history, while we elevate wrong-headed superstitions and the ignoramuses who champion them.

Vonnegut’s narratives frequently begin with an anthropologist’s discussion of the setting we are about to enter. He often frames his narratives as plausible outcomes to perverse readings of history, politics, religion, and tribalism. And he dares us to think about the extension of these elements as they become hardened through orthodoxy. Trump is from the white, privileged, born-with-a-silver-spoon set, interested only in the continued aggregation of wealth without regard to the social burdens their material aims place on those born to less privilege. An important factor in Trump’s rise is his admitted reliance on the less educated and on evangelicals: the dogmatists.

Vonnegut’s antagonists scream with cartoonish piggishness. Senator Lister Ames Rosewater (GBR) filibusters his son’s generosity with tales of the eternally weak, the poor, and the dangerous path America is on, paralleling our eventual decline to that which brought down ancient Rome. That was 15 years before Saint Reagan and his brand of nefarious White House intrigues such as the Iran-Contra scandal. This was also true of the Bush-Cheney-Halliburton commercialism of war in the aftermath of 9/11.

Arnold Marx, from Mother Night, presents a warning about diminishing the value of another’s culture in favor of one’s own. The amateur archaeologist sees past the dust of all history concentrating only on the atrocities committed against an entire Jewish population while dismissing a nearly parallel genocidal attack by an even earlier band of Hebrews against a neighboring culture. The dust of history buries both but only one is viewed as tragic by the young archaeologist. Same crime. Different outcome. Identity politics writ large. Even more sadly, this sabra son of Israel has no idea who Goebbels was.

Slaughterhouse-Five forever established the quintessential PTSD voice of the dissembled mind. Born from a 22-year-old WWII American soldier captured in the frigid Battle of the Bulge and sent to relative safety in the open city of Dresden, Vonnegut, at age 22, witnessed the aftermath of the single largest one-day massacre of civilians through the use of conventional armaments. Though the book is often misunderstood as an anti-Vietnam War book, Vonnegut did believe that the psychological challenges of any war have the same effect.

There are two Vonnegut books I would recommend at this stage of our discontent: A Man Without a Country and Jailbird. The first was published near Kurt’s death and explains how it is that those at the bottom of our classrooms now seem to rule the universe. Be prepared for lots of myth busting, lots of ludicrous religious sentiments laid low, and political shenanigans dependent upon the willful ignorance of an impatient and selfish electorate. Vonnegut has long reigned supreme for describing power as the manifestation of wealth, and that wealth is often dumb luck if not nefariously gained.

Jailbird, on the other hand, is set within the byzantine White House of Richard Nixon as his palace crumbled. But more telling are the vast financial interconnections of seemingly all commerce and political power under the hidden banner of the RAMJAC Corporation. Vonnegut readies us for society’s apparent acceptance of such expected criminality, even within our official institutions, prefacing the text by recounting the woeful tale of Sacco and Vanzetti, admitting to their belief in anarchism but denying the charge of murder against them..

The worst part of Vonnegut’s retelling relies mostly on Judge Thayer’s transcripted remarks. “This man, although he may not have actually committed the crime attributed to him, is nevertheless morally culpable, because he is the enemy of our existing institutions.” Protestors showed up at the executions with banners emblazoned with more of Judge Thayer’s objectionable remarks, “DID YOU SEE WHAT I DID TO THOSE ANARCHIST BASTARDS THE OTHER DAY?”

Sacco and Vanzetti went to the electric chair the same night as did Celestino Martinez, the admitted killer in the case for which Sacco and Vanzetti were executed. It shouldn’t surprise anyone, then, that Vonnegut, at this point, references Christ’s innocence at his crucifixion. “As for the last days of Saco and Vanzetti as a modern Passion: As on Golgotha, three lower-class men were executed at the same time by a state. This time, though, not just one of the three was innocent. This time two of the three were innocent.”

One dimension of the forces holding together Vonnegut’s world is a combination of ignorance, fear, low self-esteem, and a doubtful belief that things will simply work themselves out. Where does America find itself now? Sixty million people believed Trump when he said that only he could solve the nation’s problems. But, for one moment, think of the scene in Jailbird when Walter Starbuck limousines his way out of jail while sitting behind a toddler’s steering wheel. He may seem in control, but forces unseen are conspiring to determine his future.

There is one other notion Vonnegut insists upon: beginning with good intentions. Kurt’s books often open with an optimism borne of new knowledge, new spirituality, new purpose. The fact that so many of his characters meet despairing outcomes is more than just a story’s natural outcome. All historical eras mark their beginnings and endings based upon who died when and where. The last one standing gets to call that period whatever they want and slant it whichever way they want.

The fact that there are more compelling tales beneath the historical markers, many with major roles in the eventual success or failure of any period, is part of a production most people don’t care to hear or see. No one goes to the theater to watch the carpenters and painters make the settings. However, everyone wants that moment when the lights go dim and the artificiality of the stage is accepted as real. They want, as Samuel Taylor Coleridge described it, “the willing suspension of disbelief.” Everything outside the confines of the stage does not exist, and whatever rules are at play on stage describe the only game we are playing.

Going to that theater with a willing suspension of disbelief, we are at the mercy of our playwright’s fancy. How far we are willing to go in suspending our disbelief extends for a few hours. Eventually, biology sets in. Our bellies gurgle. Our asses get tired from sitting. The bathroom calls.

Vonnegut knows that we have to get up and pee, and knows how important it is to speak about those people who hammered and painted those sets for us. Vonnegut’s diagnosis of our times involves all our political absurdities, including capitalism’s bent toward political oligarchy. Our tribalist tendencies, among other things, means that we are forever locked in the false myths of our religions and politics.

And for those old enough to have seen this movie before, take heart. Remain vigilant as 45’s egotism and nepotism play out in the current White House, headed by a man who knows no history, and who accepts as truth the unverifiable and dangerous myths that mirror the thoughts of his mostly ill-informed political base. He is bound to make more of the same mistakes that took down the likes of a fully knowledgeable and Machiavellian Richard Nixon. With any luck, we will get out of this the Nixonian route and not a la Dr. Strangelove. Trump, too, shall pass.

At this Trumpian moment, we have to come to a Vonnegutian conclusion. Vonnegutians know that our giant leap back is a quake in time. At some point, our fights will resume. For civil rights. For universal human rights. For unbiased scientific research. For climate change remediation. We will eventually resume and respect the general notion of being educated and informed in partnership with the agencies we have put into place to protect an individual’s and society’s rights. It is the same conclusion Vonnegut came to in his final novel, Timequake.

We must realize that we have taken this giant leap backward and that it will take years to recover what we are losing every day. In Timequake, Vonnegut’s alter ego, science fiction writer Kilgore Trout, sees the catastrophic effects of everyone thinking all would continue to go on without their effort, without their free will having any impact on life. He rouses everyone from their automatized stupor by telling them, “You were sick, but now you’re well, and there’s work to do!”

Kurt Vonnegut tells us that the game will always be stacked against the individual, and that everyone deserves common decency simply for making an effort at living. When Trump and his regressive minions retreat from the scene, we will all have to take up Kilgore Trout’s mantra and realize this was not our America. However, “You were sick, but now you’re well, and there’s work to do!” 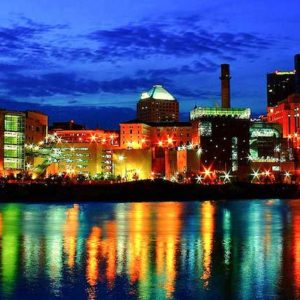 St. Paul and Minneapolis may be known as the “Twin Cities,” but they’re more fraternal than identical. Divided by the Mississippi...
© LitHub
Back to top