On Her Obsession with Astronomy

“Behind the cotton wool of daily life is hidden a pattern,” wrote Virginia Woolf. In life and literature, this was her destination: raw, unfiltered reality.

It’s no wonder, then, that astronomy fascinated her. “When you consider things like the stars,” says Katharine in Night and Day, “our affairs don’t seem to matter much do they?” The night sky reveals a vast and enigmatic universe, and Woolf often gazed up in her pursuit of the grand scheme.

Virginia Woolf’s father, Leslie Stephen, was a preeminent man of letters who partook in the Victorian obsession with natural history. His library was filled with volumes, old and new, on biology, geology, and astronomy, and the young Virginia, who did not receive a formal education, spent much of her childhood among this reservoir of knowledge. “I owe all the education I ever had to my father’s library,” she would later write. Woolf almost certainly would have learned about the movements of the planets, the cycles of the moon, and the distance of the stars. During the late 19th century, European intellectual society was grappling with a new awareness of deep time and unprecedented scale, and Woolf grew up in the midst of this sea change.

This is how Woolf often treats the celestial domain: as idyllic, inhuman, and other.

As Woolf grew older, she not only developed an interest in stargazing (eventually mounting a telescope at her summer home) but also kept up with the astronomical science of the day. In her 2003 book, Virginia Woolf and the Discourse of Science, Holly Henry provides a rich body of evidence that Woolf was knowledgeable about the stars and planets as well as the revolutionary discoveries of Einstein and Hubble. Woolf learned the broad facts of astronomy as an avid reader of James Jeans, who wrote The Mysterious Universe (a widely-read science book for laypeople). Woolf interiorized Jeans’ descriptions of an incalculably large, turbulent universe, and, as Henry notes, “passages taken nearly verbatim from Jean’s non-technical astronomy books appear in […] The Waves (1931) and The Years (1937).” Woolf understood well the strangeness of outer space, the significance of distinct galaxies, and, as she wrote in “The Narrow Bridge of Art,” that “the age of the earth is 3,000,000,000 years; that human life lasts but a second…it is in this atmosphere of doubt and conflict that writers have now to create…”

In 1927, she traveled with her lover, Vita Sackville-West, from London to Yorkshire to view a total solar eclipse, a once-in-a-lifetime opportunity. Woolf described the event in vivid detail in her diary, noting the sun’s “red streamers” (magnetic loops on the sun’s surface) and the progressive drama from light to dark to light again, until it was “all over till 1999.”

Telescopes, which became increasingly affordable during the early 20th century, also intrigued Woolf. Before obtaining her own telescope late in life, Woolf spent evenings sky watching with members of the Bloomsbury circle and wrote a short story entitled “The Searchlight,” a brief romance about a young boy who uses a telescope first to see the stars and then to eye a girl. Her diaries and letters are littered with telescopic references, and, according to Henry, “telescopes or telescopic devices […] appear either literally or metaphorically in six of Woolf’s nine novels, and in multiple essays and short stories.” Sackville-West nearly constructed a planetarium at Long Barn (the cost was prohibitive at £20,000) because, as she wrote to Woolf in a 1929 letter, stargazing was “another aspect of Virginia’s World.”

So, too, was science fiction.

In 1937, Woolf wrote an admiring letter to British science fiction author Olaf Stapledon in praise of Star Maker, an ambitious novel that surveys the history of the universe. She wrote:

“I don’t suppose that I have understood more than a small part – all the same I have understood enough to be greatly interested, and elated too, since sometimes it seems to me that you are grasping ideas that I have tried to express, much more fumblingly, in fiction. But you have gone much further and I can’t help envying you – as one does those who reach what one has aimed at.”

What is it that Woolf aims at but doesn’t reach? She was enamored with the night sky, but to what fictional ends?

Some answers can be found in Cornwall. Her family spent summers at a holiday home on the Cornwall coast, where sweeping vistas made an indelible mark. The youthful joys of Talland House (a “pocket paradise,” according to her father) would haunt Woolf for the rest of her life. She repeatedly fictionalized the place—in Jacob’s Room, The Waves, and To The Lighthouse—with a sense of nostalgic melancholy, moon and stars looming large overhead. To The Lighthouse, in particular, foregrounds Woolf’s vision of outer space by arranging itself in a clever architecture: the ocean serves as foundation, the house lawn as stage, and the sky as ceiling. At critical junctures, the cosmos hover above Woolf’s characters.

In the first pages of the novel, Mrs. Ramsay, a proxy for Woolf’s own late mother, is captivated by the oceanside view:

“For the great paleful of blue water was before her; the hoary Lighthouse, distant, austere, in the midst; and on the right, as far as the eye could see, fading and falling, in soft low pleats, the green sand dunes with the wild flowing grasses on them, which always seemed to be running away into some moon country, uninhabited of men. That was the view, she said, stopping, growing greyer-eyed, that her husband loved.”

This is how Woolf often treats the celestial domain: as idyllic, inhuman, and other. Later in the novel, Mrs. Ramsay catches another glimpse of the moon, while her daughter Prue catches a glimpse of her:

“[…] as she came downstairs, she noticed that she could now see the moon itself through the staircase window—the yellow harvest moon—and turned, and they saw her, standing above them on the stairs. ‘That’s my mother,’ thought Prue […] That is the thing itself, she felt, as if there were only one person like that in the world; her mother.”

In this scene, the merging of moon and mother underscores a longing for the objective and subjective spheres to come together once and for all. Woolf always sought a more perfect union with nature. According to critic Jean Guiguet, “To exist, for Woolf, meant experiencing that dizziness on the ridge between two abysses of the unknown, the self and the non-self.” If she had her head in the clouds, it was because they (the clouds) represented a purer form of being, unburdened by selfhood. So, too, did the moon and the sun and the stars. In The Waves, Rhoda sees a shooting star: “There was a star riding through clouds one night, & I said to the star, ‘Consume me’.”

“I have some restless searcher in me. Why is there not a discovery in life? Something one can lay hands on and say, ‘This is it.’”

Here is the basis of Woolf’s preoccupation with astronomy. The night sky offers flashes of “the thing itself,” a phrase she also uses in her posthumous memoir, writing, “We are the words, we are the music, we are the thing itself.” There’s also a 1926 diary entry—composed, as it happens, while she was drafting To The Lighthouse—that closely mirrors the scene above:

“I have some restless searcher in me. Why is there not a discovery in life? Something one can lay hands on and say, ‘This is it.’ My depression is a harassed feeling. I’m looking: but that’s not it—that’s not it. What is it? And shall I die before I find it? Then […] I see the mountains in the sky: the great clouds; and the moon which is risen over Persia; I have a great and astonishing sense of something there, which is ‘it.’ It is not exactly beauty that I mean. It is that the thing is in itself enough: satisfactory; achieved.”

Woolf looks up and finds the mystical “it.” And the wheels are turning again because she must do “it” some small justice in her writing. Woolf explains in A Room of One’s Own:

“What is meant by ‘reality’? It would seem to be something very erratic, very undependable— now to be found in a dusty road, now in a scrap of newspaper in the street, now a daffodil in the sun. It lights up a group in a room and stamps some casual saying. It overwhelms one walking home beneath the stars and makes the silent world more real than the world of speech […] Now the writer, as I think, has the chance to live more than other people in the presence of this reality. It is his business to find it and collect it and communicate it to the rest of us.”

Joshua Wilbur is a writer based in New York City. 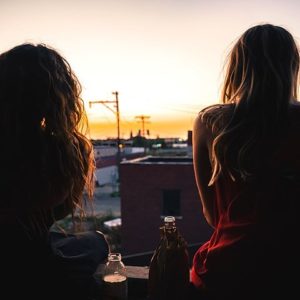 When I was a middle schooler, trying to understand the sometimes tricky business of having girlfriends, I turned to books...
© LitHub
Back to top