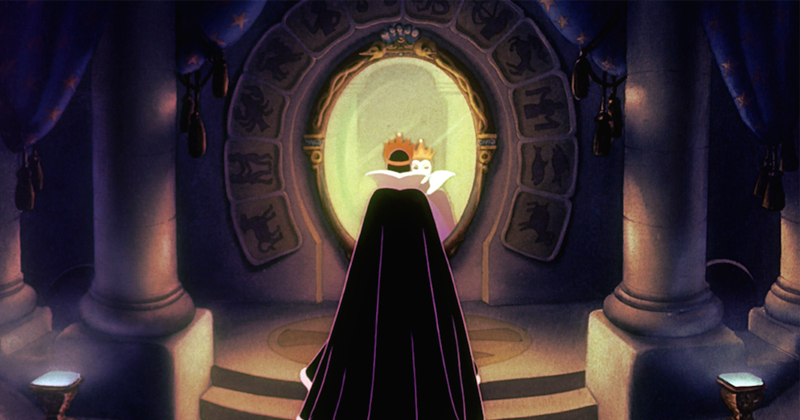 I was six when I first sat down to watch Disney’s Snow White and the Seven Dwarfs. I was not impressed. Accustomed to the newer breed of Disney heroine—the Belles and Ariels, their animation sharper, their inner lives more vibrant—I had no concept of the film’s history, and found Snow White lacking. The girl had barely any personality, an insipid smile and no ability to learn from past mistakes. Was this supposed to be our heroine? Her greatest wish was to be “found” by a prince (who proved equally boring). And yet I started watching the film regularly, because—despite Snow White’s screen-time and her many housecleaning montages—Snow White was not really about Snow White. Snow White belonged to the Evil Queen.

I had many fears as a child, but none comes close to the absolute terror I felt toward Snow White’s stepmother. That streaming cloak and crisp white collar, those swooping brows and purple lids, the points of her crown gleaming, razor-sharp. I pictured her standing in her underground lair, raising storms. I thought she watched me through our mirrors. I worried she knew my thoughts, and that to even think I am frightened would summon her. At night when I struggled to sleep I would repeat to myself, “I love the Queen,” as if in supplication, the sort of fear that’s tantamount to worship. I rewound her again and again on VHS. Where Snow White was bland and prim, her foil was fascinating.

The Evil Queen wanted the most: the most beauty, the most power. She wanted it so badly that she’d change her shape, she’d maim, she’d kill. She understood desire, and embraced it. I, too, have always had insatiable desires. I, too, have what creature comforts I need to be healthy and happy, yet strive constantly for more. I know wanting so deep that it is paralytic, frightening. I’ve been born with so much, while others are born with so little, that it feels selfish to have this much desire, to even say the words I want. It seems like karmic poison. But even as it seems selfish to want so much, I wonder if it is really selfish not to?

The largest commonality I see among the unhappiest of my peers is the shame they feel about their dark desires. It’s easy to want the things you’re supposed to want, the things everyone wants: a 401k, career success, a partner who loves you. It’s harder to want things that are taboo, things that are gluttonous or cruel or self-seeking—two extra-large pizzas to be eaten alone in one sitting, time away from your child, sex with someone else’s partner. American Puritanism filtered through Disney’s lens in the 1930s tells us that the cure for such desire is cleaning house for working men, talking to bluebirds. It encourages denial, a revision of self that mirrors Disney’s overarching revision of the dark folk stories that inspired its films. Yet for all this advice, for all our self-help books and self-discipline and self-denial, we continue wanting. As modern adults, we are presented with two choices: tamp down our distasteful desires until we’re vacant-eyed Snow Whites, or fulfill them and suffer the Evil Queen’s consequences. But what if there’s a third choice: to acknowledge but not act, to give desires space and kindness without needing to fulfill them?

If there is a way out of the binary of desire—a choice other than ingénue or jezebel—it might be found through our relationship with fairy tales. Fairy tales are complicated, often nebulous things. You’d be hard pressed to find a standard definition for the term—like pornography, we know a fairy tale when we see it. My own first encounter with the genre (likely at far too young an age) was not the romanticized Disney, but a video recording of Stephen Sondheim and James Lapine’s Into the Woods, the Broadway muscial that owes more to the Brothers Grimm’s tales of stepsisters hacking at their feet to fit the glass slipper than mice sewing gowns for princesses. During Act One, the characters enter the woods to perform tasks that will help them get their wishes: a night at the prince’s ball, a pregnancy, lost beauty. Upon succeeding, they return to their village, where Act Two begins devoid of the usual trappings of “happily ever after.” Instead, the protagonists must face the literal music and acknowledge that their wishes have unforeseen impacts.

“Desire is scary—it is bodily and subconscious and disregards both logic and law.”

Into the Woods is a story about desire: how to figure out what you want, how to get it, how to grapple with its consequences. The play opens with the words “I wish” and quickly demonstrates the world has little sympathy for wishes. And yet “I wish . . .” is also the show’s closing line. It is these wishes, more than magical creatures or simplistic language, which define the fairy tale. A fairy tale is structured longing, a child’s first verbalization of that ache in her chest when she the gap between what is and what could be. It is desire that draws us to fairy tale characters, that propels their resonance beyond the archetypes. It is Snow White and the Seven Dwarfs’ treatment of desire that makes Snow White a cipher, while the Evil Queen seems real. The Queen is frightening not only because of her relentless vanity, her coldness and her sneering magic mirror. She is frightening because, in my heart of hearts, she’s who I’d rather be: someone who wants more for herself, rather than a passive princess.

In the original Brothers Grimm tale, the Evil Queen was made to dance on hot coals at Snow White’s wedding not because she had wild desires, but because she made wild decisions. Just because we want doesn’t mean “we deserve,” nor “we should have,” nor “we will have.” More often than not nothing will (or should) come of the vocalization of desire other than the catharsis of acknowledging the feeling. A child doesn’t think that by saying “I want to be a princess” she’ll become one. And fairy tales don’t tell children to stop wanting—only to be careful.

As we get older, we come to recognize the moralistic elements of the fairy tales we’re told as children, the other side of the coin: Little Red Ridinghood warns that bad things happen when we stray from the path. Beauty and the Beast, when originally told in French salons, was a directive to young brides to submit to arranged marriages. Hansel and Gretel proves that indulging our hungers leaves us vulnerable to the world’s evils. While we celebrate the act of wanting, we are warned of the consequences. And therein lies the unexpected nuance: We tell fairy tales to imagine ourselves otherwise and escape from our existence, while simultaneously using them to draw reality’s boundaries and make meaning of experience.

It is certainly simpler to read fairytales as either just escapism, or just a set of antiquated instructions. It is easier to say, “the Queen is bad, this thing you want is bad” or “Snow White is good, this thing you want is good” than to tackle the innate feeling of longing. Desire is scary—it is bodily and subconscious and disregards both logic and law. We can’t want ourselves into wanting anymore than we can wish our eyes a different color or our bank accounts full. And we can’t—despite directives to pray or pretend otherwise—want ourselves out of what we do want. We talk about desire in terms of what it provokes us to do: overeat, cheat, steal, abandon, poison, kill. But though unruly, the desire itself is not dangerous—the feeling itself, its recognition, is not something to fear. We simply must do as children do and learn to distinguish between the imaginary and the real, facing ourselves without shame.

At six years old I was a difficult child: prone to dramatic tantrums, diagnosed with ADHD, a biter. My emotions were intense and overwhelming. I felt everything fully. I needed a compatriot, an example, an Evil Queen to show me that I was not alone. I needed to see that my desire, while frightening, was also a source of untapped strength. It made me interesting, eventually made me a writer. As an adult, my fantasies are more tangible: more money, more acclaim, a life not tethered to a toddler. I have a vision of a parallel self—not a mother, sovereign over her own time, author of multiple bestselling novels. I do not chastise myself for imagining, for wanting. I inhale, I exhale; I acknowledge, I release. For I know it is only when we give ourselves the space to imagine the world that we desire, when we hold it simultaneously in mind with the world that exists, that we come face to face with our own power.

Julia Fine is a graduate of Columbia College Chicago’s MFA program. She teaches writing in Chicago, where she lives with her husband and son. 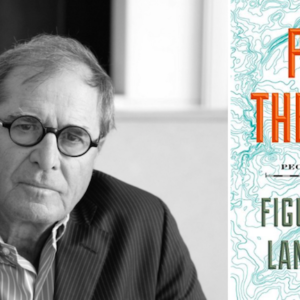 Paul Theroux's new collection of essays, Figures in a Landscape: People & Places, is out this week from Eamon Dolan/Houghton...
© LitHub
Back to top