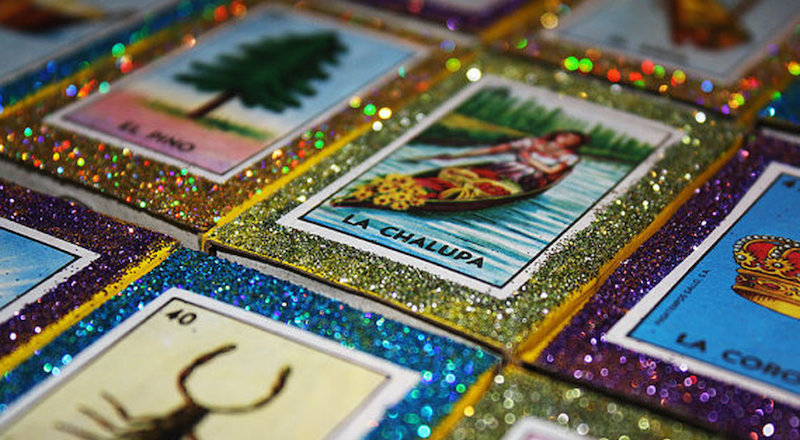 Yvette Benavides on a Childhood Source of Identity,
Freedom, and Creativity

In creative writing courses, we’re often told that quotidian topics make the best grist for the mill. We’re asked to consider the most mundane of items, the ones we step over in the houses of our memories or don’t notice because they are always there.

Lotería, the popular Mexican bingo game, was such an item for me when I was a kid in the 1970s, growing up in Laredo, Texas, on the US-Mexico border. It did not have the shine of the board games my siblings and I played on long, languid evenings when our homework was all done. Monopoly had the monopoly on them all with its play money, and the Game of Life seemed almost as important, with the allure of adult themes of marriage and careers, but those games were too difficult for the younger siblings who wanted to join in.

When my mom said to play a game everyone could participate in, out came Lotería.

Lotería—Spanish for “lottery”—is a game of pure chance, similar to bingo. Each player gets at least one tabla—a board with a four-by-four grid of pictures—and a pile of markers, often pennies or uncooked beans or corn kernels. A card-caller shuffles a deck of 54 cards with a standard set of pictures, words, and numbers matching those on the tablas. For most of us, the numbers are vestigial features, largely ignored. The pictograms are the important part. There are people (e.g., #3: La Dama/The Lady and #34: El Soldado/The Soldier) and animals (e.g., #50: El Pescado/The Fish). There are plants (e.g., #51: La Palma/The Palm Tree) and fruit (e.g., #28: La Sandia/The Watermelon) and musical instruments (e.g., #29: El Tambor/The Drum). Sundry items round out the 54 cards. They are commonplace items, like #46: El Sol/The Sun and #16: La Bandera/The Flag and #5: El Paraguas/The Umbrella. Players try to be the first to cover a row or all the squares on their tabla, and then shout, “¡Lotería!” It’s an easy game to play.

Part of what adds to the fun is the card-caller, who is usually chosen for their improvisational skills. Besides calling out the name on the card, the caller can also include verses for each card. These are not riddles for players to decipher à la Password; nor are they particularly lyrical or evocative. They’re just well-turned verses that are comfortingly familiar and can fill the silence while players review their tablas to see if the called item appears. For example, #47: La Corona/The Crown has a verse that goes, “El sombrero de los reyes,” or, “The hat of kings.” #20: El Pájaro/The Bird goes, “Tú me traes a puros brincos, como pájaro en la rama,” which means, “You have me hopping here and there, like a bird on a branch.”

For the last couple of decades, Lotería has become a cool part of popular culture in the same way that Day of the Dead has captured the attention and imagination of so many who build altars to their loved ones with milagros and sugar skulls and all the requisite accoutrements of this early November observance. Lotería also seems to have been widely appropriated in this country, with Etsy shops and urban market spaces featuring tchotchkes and T-shirts, candles, and figurines of the Lotería pictograms. It is an iconography, too, revered by those who admire or embrace this and other ethnic elements of Mexico.

For me, lately, as a writer of color in today’s America, in these seismic, contentious times, Lotería is no longer a game.

It is also—it turns out—a wonderful source of inspiration in the writing classroom. In my fiction classes, I use the Lotería cards in an improvised game to help students break the ice on the first day of the semester. I assign them to small groups and deal out a few cards to each. They are to create a story with a protagonist, an antagonist, and conflict. Mostly, they just have fun inventing the most unlikely and surreal of stories, in which a spider and a skull marry after a battle with a buck or a frog, or in which a fine lady finds a fallen star on the ground and gives it over to a musician, who writes the world’s saddest song and woos a parrot with magic powers, who turns the frog into a prince.

The stories are always inventive, funny, and implausible, and the students get to know each other. The game helps defuse the inherent intimidation and strict ceremony of the first day of class.

The cards are just as effective as a source of inspiration in a creative nonfiction course, especially for students who scratch their heads at a “free topic” assignment and want to hook their freewriting on at least the idea of a prompt.

After all, who doesn’t love a writing prompt? Think of your earliest childhood memory; write from a photograph. At writing conferences, where everyone is bored or tired or weary of testing their introversion at another snack table or reception, I’ve seen how asking even seasoned writers to spend five minutes writing to a prompt can transform the energy in a room.

Lotería cards are one more way to slap at the mental cobwebs of the past, to blow the dust off a box at the back of the closet of our minds and see what’s inside.

For me, lately, as a writer of color in today’s America, in these seismic, contentious times, Lotería is no longer a game. It is life-giving, comprising the most essential parts of my true stories. I find I cling to it and other aspects of my life too long overlooked and taken for granted.

The cards become like 54 sets of nesting dolls, and endless permutations of prompts emerge. Pick a card, any card. Each is evocative, calling forth an unquiet free association. Even if I draw the same card twice, the scene or story that starts to emerge will be different. When I draw a card, a memory wakes up, unbidden and irrepressible. It moves my pen across a page or my fingers to a keyboard, and I go to a writing space where the quieter spectral figures of the past arrive.

We can take everyday items, like ladders or roses, and create universal stories of love and heartache, and the best and worst that happens to us.

Recently, when my calendar exploded with commitments tugging at my concentration and I dreaded a fruitless writing day, I snapped the rubber band off the deck of the Lotería cards and pulled random cards from that colorful Rolodex. The happenstance luck of the draw rendered these cards and these notes.

When I was in third grade, I coveted a pair of black boots. My mother bought white boots for my sisters and me, at a no-name department store, though I pored through my sister’s copies of Seventeen magazine and found the white pair anachronistic, a throwback to Nancy Sinatra and groovy hippies. They didn’t fit well, and the black scuff marks that appeared, as if made by the air, marred the otherwise Chiclets-white boots. My mother was a migrant worker as a child. All she ever wanted growing up was a pair of red shoes. Once, on a trip back from the pizca—the harvest—in Michigan, the family stopped at a gas station in Pearsall, Texas. Hungry, they ordered sandwiches at the small lunch counter inside the store and were turned away. The man sold them gasoline for their truck but refused to serve them any food, noting that they were Mexican and the town was segregated.

My father was a middle-school science teacher. His posture was plank-straight, and he polished his shoes to a high shine. He wore a suit and tie to work every single day, standing out next to his colleagues in more casual attire. He was strict; his classes, rigorous. The kids called him El Soldado for his entire 34-year career. In middle school, I hated everything, including the kids who called my father that name. When he died, I was 30 years old. Legions of former students showed up at my father’s funeral on a steamy, sultry South Texas Labor Day. “He was my teacher 30 years ago,” one person said. “Twenty-two years ago,” said another. “Fourteen years ago.” Entire classes of children showed up shouldering their backpacks, like troops in a strange, arid country dotted by headstones. “He was like a father to me,” they said over and over again, like little brothers and sisters.

My mother ordered us to draw a bikini to cover the naked breasts of La Sirena—on the card and on every tabla. Our scribbles could not hide her overt beauty, the cascading black hair, the long, lithe arm extended toward the sun, and her amphibious nature. You can’t censor a person’s true quality.

With a small penknife, my grandfather expertly cut the cactus paddles and removed the thorns. I carried the small basin of the paddles he rinsed under a faucet by the slab of his back porch to my mother, who prepared them for the evening meal. There’s a Spanish expression—”Tienes el nopal en la frente”: “You have a cactus emblazoned on your forehead”—that is said to out someone as Mexican or part Mexican. I think about the Walmart massacre in El Paso, Texas, which occurred in August. The killer drove ten hours to a place where he knew he would find Mexicans and Mexican Americans, these nopal-brandishing people, out for a day of buying school supplies. There are few things I am more proud of than being Mexican American, being bilingual, bicultural. I celebrate my duality. However, I realize, too, that even as I move through the world with my nopal in figurative full view, the duality becomes a double-edged sword, sharp as a penknife producing a million stabs.

Christmas on the border in the early 1970s. When I was in the first grade, Santa Claus brought me an AM radio in the shape of Popeye’s head. A satisfyingly solid and colorful hunk of plastic, it was a perfect likeness of the cartoon sailor, pipe and squinting eye and all.

No matter what other games or toys pulled at our attention during the long Christmas break from school, we inevitably pulled out the bag with the Lotería game—the tablas and the cards and the bag of beans and pennies. Popeye’s head sat on the floor along with us. When I tried to tune in the English language pop station, I could only hear staticky strains of Helen Reddy or Jim Croce. What came through much more clearly was the music from just across the border, just a few miles over the bridge, past the Rio Grande. These were Spanish language love ballads sung by Mexican crooners. The lyrics were about the sun (card #46) and the moon (#23), roses (#41) and stars (#35), hearts (#27), and death (#14).

This is how it is with our true stories, too, in every language. We can take everyday items, like ladders or roses, and create universal stories of love and heartache, and the best and worst that happens to us. If we just look deeply enough, we can see that all the things we ordinarily look past or through, all the everyday things just calling to be noticed, are the universals in our stories. We are all the same in this game of life. All of us. #37. El Mundo. The World. Bingo. 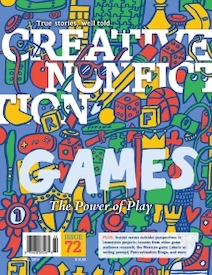 Yvette Benavides teaches creative writing at Our Lady of the Lake University in San Antonio, Texas. She is editor of the anthology series EQ: Creative Nonfiction on Social Equity with Trinity University Press. She is a commentator with Texas Public Radio and reviews books for the San Antonio Express-News. 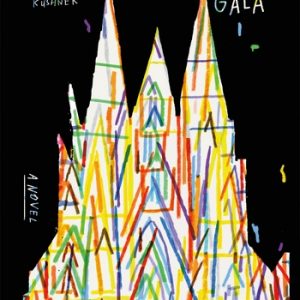 MARIBEL GARCÍA MEDINA Besides David King and Samuel Prince, there was an older one, Mary Johannes, she was called, or still...