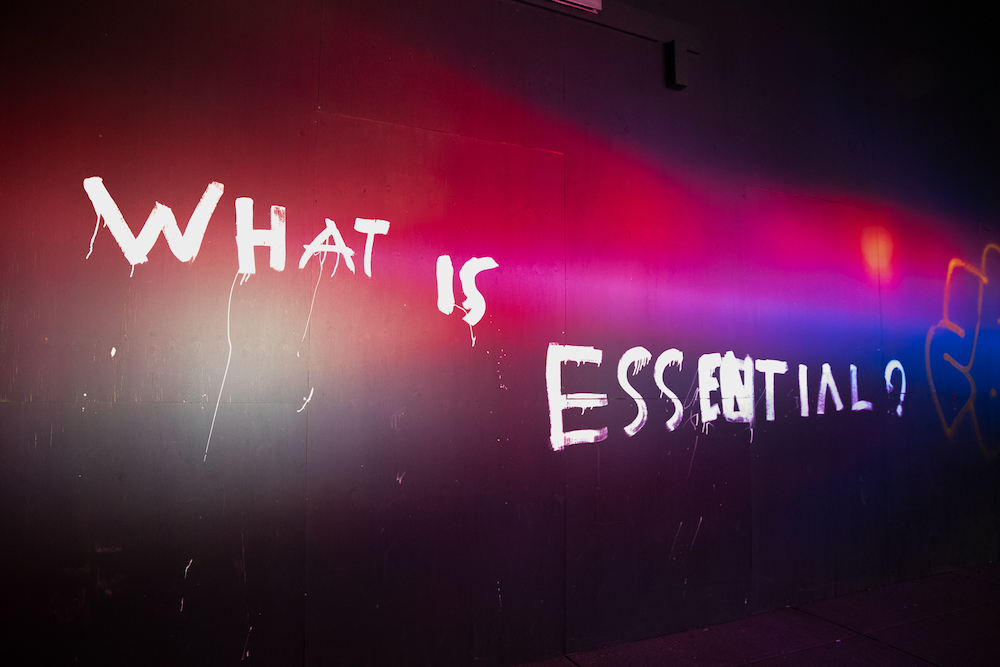 Siri Hustvedt on What the World Values When It's Falling Apart

The philosophical question hangs in the air like a ghost. On May 15 during the lock down, Rachel Cobb photographed graffiti illuminated by a passing ambulance in New York City. The question haunts me. What is essential?

Essential to what, to whom?

New York City government functioned under the lockdown. The water ran from the taps. The electricity went on. The garbage was collected. Mail arrived as usual. Mass transit continued to operate to carry essential workers to their jobs. The ambulances shrieked night and day, and the hospitals received the sick and dying, and inside the hospitals, people worked themselves to exhaustion or fell ill themselves. Outside the hospitals, workers erected makeshift morgues to accommodate the dead.

At 6:30 am, the Key Food on Seventh Avenue in Brooklyn opened for old people like me so we could shop for food more safely. Inside, the masked employees had tired eyes, but they worked briskly, efficiently. Healthcare aides cared for old people in nursing homes, dangerous as those places were. Funeral homes tried to keep up with the burden of the dead. Cemeteries hired extra grave diggers.

Imagine what would have happened if those essential workers hadn’t been working.

New York City would have fallen into civil chaos, starvation, and mass panic. Many thousands more would have died.

Although countless articles, blogs, videos, and TV spots have featured “essential workers,” the grotesque reality that would visit us without them is never articulated. It is another ghostly presence. Maybe the war metaphor so often applied to them, our workers “on the front lines,” suggests the disaster they are holding at bay. But I doubt it. Americans love waging war on polio, cancer, drugs, and viruses as if amoral biological agents are sinister enemies to be slaughtered on the battlefield.

New gratitude has surfaced among those of us who are inessential, at least in part as a consequence of our guilt. To soothe that unpleasant feeling, sentimental tributes to “heroes” abound in media. Tireless worker A. who rises at the crack of dawn and braves the viral wilderness while she does her job at the hospital, the grocery store, on the factory floor, or in the field has become a staple of pandemic news. Is heaping praise on the underpaid, unprotected, nonunion or immigrant worker who has no health insurance and insufficient PPE really enough? Is throwing her a couple of extra bucks in “hero’s pay” for a few critical weeks recompense for her essential status? Isn’t the irony of this kind of “heroism” bitter?

If the pandemic were a war, then we are losing it, if it isn’t lost already. A quarter of all the people who have died from Covid-19 in the world lived here in the United States, and disproportionate numbers of them were black and brown people doing “essential” jobs. They are the ghosts of our pandemic debacle, our dispensable “heroes.”

If the pandemic were a war, then we are losing it, if it isn’t lost already.

Caring is a word we associate with the feminine. Caring, consoling, serving. The worker who cares and consoles and serves does not have to be female, but the job itself is feminine, work assigned to the poor and lowly. Essential work but denigrated work.

Women’s work of all kinds is undervalued. Whenever women enter a field in large numbers, the status of the field plummets as does the pay. Medicine, once a profession of male demigods, has lost its divine luster now that “Doctor” no longer means “man.”

Thirty percent of US physicians are immigrants.

“The Covid-19 pandemic found a perfect foothold in this land of poor health, inequality and income insecurity,” wrote the economist Joseph Stiglitz. He did not add that inequality in the US means white men rule.

The current administration hopes to wish the pandemic away, not only because it has entirely botched the job of containing it, but because the pandemic has stripped naked a murderous ideology that has deep roots in the country. In this fantasy of swaggering white male autonomy—the pioneer, the lone cowboy, the fearless entrepreneur, the vigilante with his assault rifle—it is essential to pretend that human beings are not dependent on other human beings, especially women, that collective reality does not exist, that states and cities and towns are not complex entities of mutual interdependence which collapse without essential services. Therefore, in the fantasy, essential workers, over half of them women, must be made invisible.

Businesses and schools must open because closing them is a sign of weakness, and the fantasy requires a belligerent pretense of invulnerability. In the fantasy, wearing a mask signifies servile, effeminate groveling. It signifies penile shrinkage. It signifies unthinkable racial equality. The very nature of the virus is anathema to the white right because as a deadly traveling contagion, it is indifferent to demonization. Go after the mask-wearers, the know-it-all scientists, the namby-pamby, snowflake libtards instead. Go after Black Lives Matter instead.

The pandemic is proof that the supposedly inviolable borders of the powerful white man’s walled-off body, a body that has been extrapolated into the white body politic, is porous, dependent, and ever so fragile. Walls do not keep the virus out. The virus is not a child immigrant. It cannot be caged. Texas and Florida are epicenters now. A wishful ideological fantasy is not a protective mask; it does not substitute for keeping a safe social distance.

The fantasy is as pathetic as it is deadly.

I would like to think that we are witnessing the fantasy’s last gasp in the form of the mad yellow-haired emperor shimmying on stage without a stitch on as he belts out a song about making America great again to a shrinking number of equally deluded sycophants in red hats. I know better, and because I know better I am frightened.

Rachel Cobb is a photographer who lives in New York City. She has worked for numerous publications including The New York Times, Time magazine and Rolling Stone magazine. Her award-winning book Mistral: The Legendary Wind of Provence was published by Damiani in 2018. More of her work can be found here. 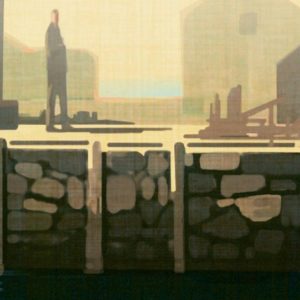 There’s a very good reason that readers return again and again to John Steinbeck’s fiction when it comes to its handling...
© LitHub
Back to top