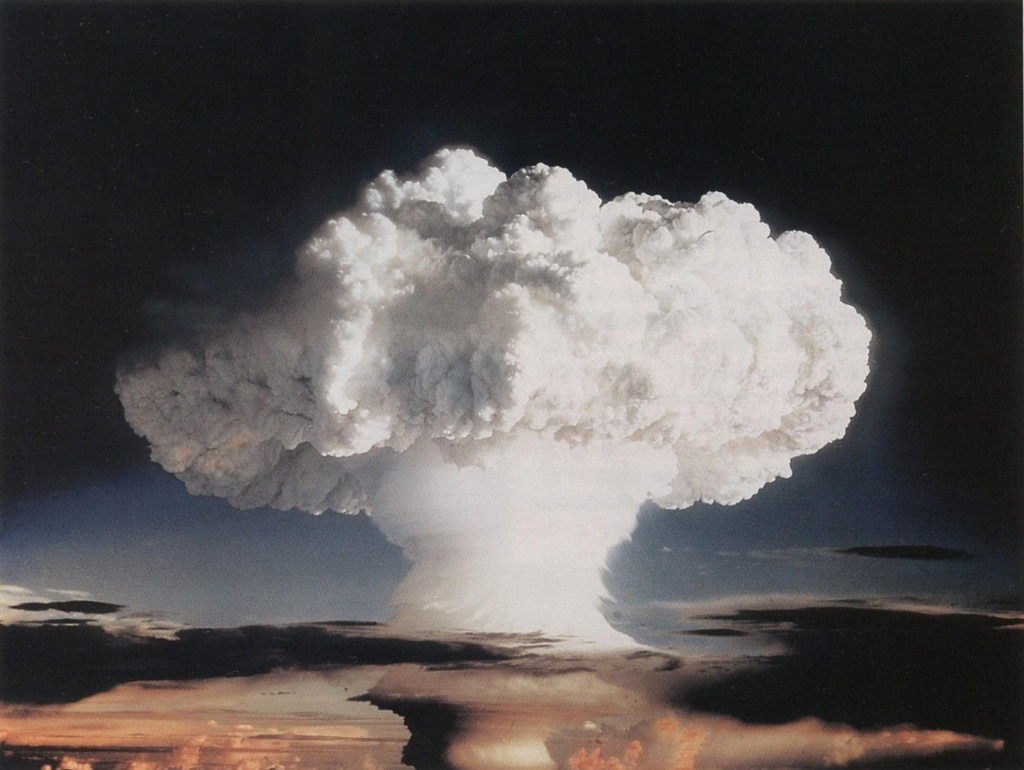 What Happens When You Break Into America’s Nuclear Bomb Factory

On Hearing the Lord's Call to Turn Swords Into Ploughshares

The second fence was intimidating. The one on the backside of the ridge was just a perimeter fence, but the three fences surrounding the target were clearly integrated into the site’s electronic security system. The first and third fences were topped with angled rows of barbed wire. The second fence, about 20 feet from the others, was threaded with fiber-optic motion sensors crowned with taut sensor cables that shimmered in the floodlight. The fences were made only of chain link. They had cut through the first one with ease. This second one, though, might be electrified. A single cut could trip an alarm. There were cameras watching them. It was around 4:15 am, and now it was only a matter of time.

They had paused in an avenue of small white rocks between the first and second fences. Michael had hung a cloth banner on the backside of the first fence. On it they’d painted a fat black bomb that looked like the one dropped on Nagasaki. It was falling into red flames. “NEVER AGAIN” was painted below it in small capital letters. Now Greg was facing the second fence, bolt cutters in hand, his heart sinking.

As his hopes deflated, an inner voice piped up: “Well, you won’t know unless you try.”

Through the years, other activists had faced similar obstacles at weapons sites and had somehow made it through. Greg had been arrested more than 40 times for civil disobedience, and had seen some remarkable things in his previous five break-ins at weapon sites. So he started cutting with his $25 red-handled bolt cutters from True Value, making sure to avoid the sensor wiring that he could see. The cutters bit down on the metal, one link at a time.

No alarms. No team of armored men. No vehicles screeching around the corner. Inside the castle-like turrets on the corners of the Highly Enriched Uranium Materials Facility were guards and guns, but they did not stir. Somewhere on the premises were armored cars mounted with six-barreled Gatling guns that could fire 50 finger-size bullets per second, a fusillade that could down an airplane. In terms of artillery, Y-12 was prepared for an armed assault by multiple intruders.

While he pulled back the flap of fencing for Megan, Greg was moved by the silence and the ease of their mission.

God is with us, he thought. This is grace.

Each step they had taken felt ordained, as if they were being led by a force, by a voice that said, “Take this step, take that step.” Greg felt summoned. He felt protected.

They had prepared as much as they could. They had learned that the Department of Energy spent 42 percent of its money on the nuclear-weapons complex. They had schooled themselves on both the history and the future of Y-12, which was planning the $6.5 billion construction of a facility to process uranium. They had learned that the new facility would continue the assembly, recertification, and storage of secondaries, those dense stainless steel cases of uranium that turn a fission bomb into a fusion bomb. There were at least 5,000 secondaries stored at Y-12, some of which were being disassembled and refurbished for the W76 warhead, which would be attached to Trident missiles on submarines patrolling the oceans. The trio had learned about life-extension programs for the weapons, which Pentagon officials referred to as “patients” who needed to be kept “alive,” who deserved “better ways to heal” from maintenance issues.

Sister Megan, Michael, and Greg had scouted from above using Google Earth, where the uranium storage facility was visible like a white bull’s-eye in the scrubby green hills. They had consulted loved ones. They had measured all good things against this one necessary thing, and they were prepared to die. They believed in the resurrection. Death was not a specter but an inevitability. They did not overplan, though. They had left room for the Spirit.

And now they were feeling its presence. The third and final fence was no problem. Cut, pull, duck. It was 4:29 am. They were in the inner sanctum, well inside the lethal-force zone, with nothing between them and the nation’s storehouse of weapons-grade uranium but 75 feet of asphalt and a haze of bright floodlight. The facility’s walls, towering and white, were so colossal that they could allegedly withstand the impact of a jet—a scenario that had a probability of occurring once every 100,000 years, according to a government report.

The most powerful tools they had were three hammers, scuffed from previous use. One was a household hammer, its wood handle inscribed with lettering in red permanent marker: Swords into plowshares, transform now into life for all, and the names of two deceased men. One was Corbin Harney, a leader of the Western Shoshone Indians in Nevada, and the other was Walter Hooke, Megan’s uncle, who never forgot Nagasaki. A small sledgehammer had an instruction from the Gospels burned into its handle: “Repent! God’s kingdom is at hand!” The third hammer, a ball-peen, was tied with strands of cloth inscribed with quotations, including ones from Father Richard McSorley (“It is a sin to build a nuclear weapon”) and Eisenhower (“Every dollar that is spent on armaments is a theft from the poor”). The hammers were the tools to carry out the prophet Isaiah’s command to end war, to transform swords into plowshares and spears into pruning hooks. With the hammers, the trio would symbolically disarm the facility and start its transformation.

But first they pulled three cans of spray paint from their backpacks. Along the north face of the building, near a turret, Greg wrote two-foot-tall red letters as he moved along the wall. His graffiti was inspired by the Old Testament Book of Nahum, who scolded the ancient Assyrian city of Nineveh, a bastion of war located in what is now northern Iraq.

WOE TO AN EMPIRE OF BLOOD, Greg wrote.

Michael used the pentagonal base of the northwest turret for his canvas. On one side he spray-painted in black, THE FRUIT OF JUSTICE IS PEACE. Megan strung the red DANGER: NUCLEAR CRIME ZONE tape between yellow concrete bollards. They were labeling the building with truth—the truth as they saw it—and this part of the mission wasn’t complete until they italicized the words with real human blood, which would make visible the invisible. Blood served two purposes here. It symbolized both the waste of human life and the gift of eternal life. Most of the men and women who worked on weaponry, or who fought wars at 10,000 feet or from 10,000 miles, did not see bloodshed. This was a way to make that real.

They took the six baby bottles out of the backpacks and began to streak the white walls with blood, which dribbled down to the asphalt in dark-red rivulets. The blood had been drawn from fellow activists, including Tom Lewis, one of the Catonsville Nine. Years after burning draft files with the Berrigans, on the 60th anniversary of Hiroshima in 2005, Lewis and 14 others blocked the road into Y-12 to protest the ongoing operations of the site that had enriched the uranium for Little Boy. Lewis died in 2008, but his blood was frozen so that he might participate in one last action from beyond the grave. It was now pooling on the asphalt outside Y-12’s uranium storage facility in the early hours of July 28th, 2012.

Now the hammers. They took turns hitting the base of the turret. The small chunks of concrete that crumbled away honored the biblical command to hammer tools of death into tools of life. Greg was filled with joy.

They thought they heard voices from up in the guard turret, but the trio made no move to hide or escape. Part of the mission was their arrest, and that was the one thing that wasn’t going according to plan. They could hear faint conversation above them, up a tower of white concrete at the top of the guard turret, which was perforated by five small rectangular windows. Because they had time, Michael began to spray another message on the base of the turret—PLOWSHARES PLEASE ISAIAH—until Greg alerted him to the lights of a vehicle. Michael didn’t quite finish the “H.”

The trio watched as a Chevy Tahoe SUV slowly approached them from the east at 4:35 am. This was it. The final part of the action had begun.

From ALMIGHTY. Used with permission of Blue Rider Press. Copyright 2016 by Dan Zak.

Dan Zak is a reporter for The Washington Post. He has written a wide range of news stories, narratives, and profiles while on local, national, and foreign assignments. He is from Buffalo, N.Y., and lives in Washington, D.C.

Five Beach Reads for July, Wherever You Are 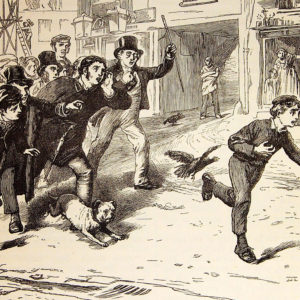 On July 17th, 1895 the body of a 37-year-old woman was found in a small terraced house in East London. Her eldest son immediately...
© LitHub
Back to top
Loading Comments...