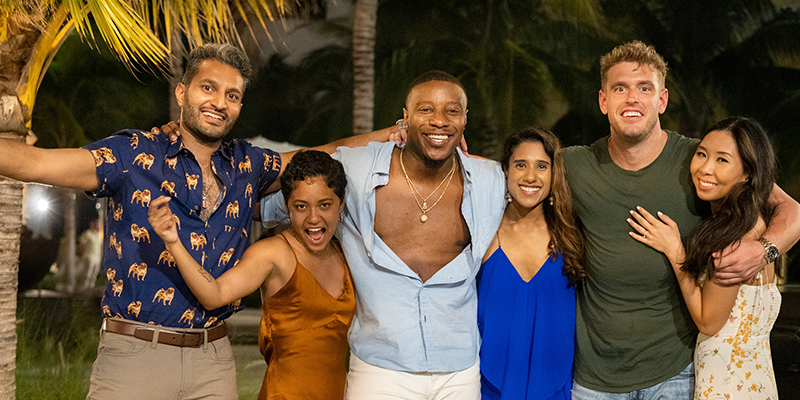 What can Love Is Blind teach us about writing? Glad you asked…

Of course you have binge-watched every single episode of Love Is Blind‘s second season by now. You’ve felt for Danielle in her hot dog costume. You’ve cheered on Iyanna and Jarette (okay, mostly Iyanna). You’ve been afraid Shayne would spend all of Natalie’s money on an old fashioned fountain. You’ve laughed at Shake’s Nobu reservations. But have you considered what this ridiculous and perfect show can teach us about (gasp) writing?!

1. Establish the rules of the world.

Nick and Vanessa Lachey come right out and say it from the get-go: You will speed date in “the pods.” You will have a series of conversations with your potential partners, narrowing down your selection until you fall in love. You will never see the person on the other side of the wall. You will get engaged, and then you will be allowed to meet your person in the flesh for the first time. Honestly, the way the first half of the show reads is like something out of science fiction. How can you create a believable world? I think part of it is just really believing in it. Can we talk about the pods? They way they constantly refer to their time “in the pods,” even to people who doubt “the experiment”? Or: how can you use language as shorthand for an in-group? It sounds silly every time they say “when we fell in love in the pods,” but that’s their story, and they’re sticking to it!!

We know from the very beginning that these couples will have to decide during the finale whether or not they will legally bind themselves to another person. That really raises the stakes! It’s not unlike how, in the first line of The Secret History, we find out that Bunny will die. It’s just a question of how we get there.

Readers love knowing something that the characters don’t. Remember how Shayne asked Natalie to be his girlfriend, and then he tried to keep talking to Shaina? Girls talk!! It was an absolute joy watching him walk into the pod that day, knowing she was going to put him on blast about it. He was none the wiser! Dramatic irony—it raises the stakes and keeps everyone on the hook.

4. Give us a dependable villain.

Big fan of the hate-watch/hate-read. It’s like a slow-motion car crash; you simply cannot look away. Fans of the first season waited with bated breath to see who the “new Jessica” would be. It’s in our nature: we need at least one person to reliably hate, so that we may use that hatred to bond with our peers. One sacrificial lamb, please! What can also be fun is the moment when you flip the script and make your reader wonder if they were wrong about said villain. Including a mitigating circumstance of some sort might help you create depth here. (I saw some of you come around to Shayne on Twitter about two-thirds of the way through, maybe after we found out his father had just died. Fair enough, but also for shame!) That brings me to…

5. Reveal backstory when the time is right.

Everybody’s got a Rosebud—the reason they are the way that they are. Everyone on the show has said that falling in love in the pods has allowed them to get to that deeper level of conversation much faster than normal. It reminded me of The New York Times‘ “36 Questions That Lead To Love,” which could be a fun thing to answer for each of your characters if you’re still trying to get inside their heads. What’s that one memory/shame/fear that your characters carry with them always? What heavy issues do they still need to work out?

6. Switch up the setting.

If things are starting to feel a little stale, consider a second location. Force your characters into an environment foreign to them and see how they fare! Do they embrace the newness? Do they hide in the closet? Their reactions can be really revealing.

It’s a trick as old as time, and honestly, we still can’t get enough of this drama. (Probably because they play up dramatic irony; see #3.) More! Love! Triangles!

8. Throw everyone together. Add booze. Stir.

Family dinners or big parties are foolproof ways to get the plot going. (See: Pride and Prejudice, The Great Gatsby, etc.) Secrets will be revealed! The past bubbles up! People will meet people their partners definitely wish had been locked in the pods forever! Someone’s always crying in the corner. (Oh, Sal.) Also, there will always be that one guy who thinks he has the tea. (And it’s always a Nick. Like Nick Carraway before him, this season’s Nick just cannot wait to dish.)

9. Throw in some incredibly weird and specific details for characterization.

A lot of people are forgettable. Reality TV is fun because it presents you with everyone’s most extreme selves. When it comes to pinning someone to the page, though, that one ridiculously specific detail can go a long way. The odder, the better. From a psychology standpoint, humans are more likely to remember interactions or remarks that seem inappropriate in a given context or are wildly unexpected. Danielle and Nick sitting on the couch dressed as a hot dog and an ear of corn? That’s seared into my brain now. Forever. But it’s more than the stunning visual. It says a lot about sweet, sweet Danielle’s character. T Kira Māhealani said it best:

this woman is anxious and wholesome and just wants to play her inflatable instruments dressed as a hot dog. Let her live.

You (almost) can’t make this stuff up.

10. You can always create tension by bringing in family members.

Meeting the family is like getting the prequel to someone’s entire being. It can explain a lot about their upbringing. (See: #5.) It also usually creates a lot of anxiety for the characters, which can be wicked fun for you, the writer! Families often come with conflict. There’s cultural and class expectation to consider, too. Was I hoping Shayne and Natalie might be the new Romeo and Juliet? Maybe.

Something to consider at the end of every story: Are the characters in a different place? How have the events here changed them? There was no greater victory of this season than Deepti leaving Shake at the altar and telling her mother that she finally knows her worth.

If we have learned anything, it is obviously that it’s what’s on the inside that counts. People can fall in love with your characters sight unseen.