Caitlin Doughty Has Your Important Facts For Surviving Daily Life

What if they make a mistake and bury me when I’m just in a coma?

Okay, so to be clear, you don’t want to be buried alive, is that correct? Got it.

Lucky for you, you don’t live in Ye Olden Times! During Ye Olden Times (before the 20th century), doctors had a less-than-flawless track record when it came to declaring people dead. The tests they used to determine if someone was honest-to-God-really-dead were not just low-tech, they were horrifying.

For your enjoyment, here’s a fun sample of the death tests:

–Shoving needles under the toenails, or into the heart or stomach.

–Slicing the feet with knives or burning them with red-hot pokers.

–Smoke enemas for drowning victims–someone would literally “blow smoke up for ass” to see if it would warm you up and make you breathe.

–Burning the hand or chopping off a finger.

–Writing “I am really dead” in invisible ink (made from acetate of lead) on a piece of paper, then putting the paper over the corpse-in-question’s face. According to the inventor of this method, if the body was putrefying, sulfur dioxide would be emitted, thus revealing the message. Unfortunately, sulfur dioxide can also be emitted by living people, like those with decaying teeth. So, it’s possible there were a few false positives.

If you woke up, breathed, or visibly responded to these “Tests”⁠—hallelujah!⁠—you weren’t dead. But you might be maimed. And that needle stuck in your heart could actually kill you.

It is highly unlikely that your living brain will slip through the cracks and that you’ll be sent away from the hospital in a coma.

But what about the poor souls who weren’t put through the battery of stabs, slices, and enemas, but were just assumed to be 100 percent dead and sent to the grave?

Take the tale of Matthew Wall, a man living (yes, living) in Braughing, England, in the 16th century. Matthew was thought to be dead, but was lucky enough to have his pall-bearers slip on wet leaves and drop the coffin on the way to his burial. As the story goes, when the coffin was dropped, Matthew awakened and knocked on the lid to be released. To this day, every October 2nd is celebrated as Old Man’s Day to commemorate Matthew’s revival. He lived, by the way, for twenty-four more years.

With stories like that, it’s no wonder that certain cultures had extreme taphophobia, or the fear of being buried alive. Matthew Wall was lucky that his “body” never reached his grave, but Angelo Hays was not.

In 1937⁠—true, 1937 is not quite Ye Olden Times, but at least it’s way before you were born⁠—Angelo Hays of France was in a motorcycle accident. When doctors couldn’t find his pulse, he was pronounced dead. He was buried quickly and his own parents were not allowed to see his disfigured body. Angelo would have remained buried if it wasn’t for the life insurance company’s suspicions of foul play.

Two days after Angelo was buried, he was exhumed for an investigation. Upon inspecting the “corpse,” examiners found that it was still warm, and that Angelo was alive.

The theory is that Angelo had been in a very deep coma which slowed his breathing way, way down. It was that slow breathing that allowed him to stay alive while buried. Angelo recovered, lived a full life, and even invented a “security coffin” with a radio transmitter and a toilet.

Luckily, if you fall into a coma today, in the 21st century, there are many, many ways to make sure that you are good and dead before you’re moved on to burial. But while the tests may show that you are technically alive, your new status may be small comfort to you and your kin.

Media and TV shows often throw around terms like “coma” and “brain-dead” interchangeably. “Chloe was my true love, and now she will never wake from her coma. I must decide whether to pull the plug.” This Hollywood version of medicine can make it seem like those conditions are the same, just one step away from death. Not true!

Of the two, the one you really don’t want to be is brain-dead. (I mean, neither is great, let’s be honest.) But once you’re brain-dead, there is no coming back. Not only have you lost all the upper brain functions that create your memories and behaviors and allow you to think and talk, but you have also lost all the involuntary stuff your lower brain dos to keep you alive, like controlling your heart, respiration, nervous system, temperature, and reflexes. There are gobs of biological actions controlled by your brain so that you don’t have to constantly remind yourself, “Stay alive, stay alive…” If you are brain-dead, these functions are being performed by hospital equipment like ventilators and catheters.

You cannot recover from brain death. If you’re brain-dead, you’re dead. There is no gray area (brain matter joke): either you are brain dead or you are not. If you are in a coma, on the other hand, you are legally very much alive. In a coma, you still have brain function, which doctors can measure by observing electrical activity and your reactions to external stimuli. In other words, your body continues to breathe, your heart beats, etc. Even better, you can, potentially, recover from a coma and regain consciousness.

Okay, but what if I fall into a deep, deep coma? Will someone eventually pull he plug and send me off to the mortuary? Will I be trapped in both a casket and in the prison of my mind?

No. We now have a whole battery of scientific tests to confirm that someone is not just in a coma, but really, truly brain-dead.

These tests include but are not limited to:

⁠–Seeing if your pupils are reactive. When a bright light is shined into them, do they contract? Brain-dead people’s eyes don’t do anything.

⁠–Dragging a cotton swab over your eyeball. If you blink, you’re alive!

⁠–Testing your gag reflex. Your breathing tube might be moved in and out of your throat, to see if you gag. Dead people don’t gag.

⁠–Injecting ice water into your ear canal. If doctors do this to you and your eyes don’t flick quickly from side to side, it’s not looking good.

⁠–Checking for spontaneous respiration. If you are removed from a ventilator, CO2 builds up in your system, essentially suffocating you. When blood CO2 levels reach 55 mm Hg, a living brain will usually tell the body to spontaneously breathe. If that doesn’t happen, your brain stem is dead.

⁠–A CBF, or cerebral blood flow study. A radioactive isotope is injected into your bloodstream. After a period of time, a radioactive counter is held over your head to see if blood is flowing to your brain. If there is blood flow to the brain, the brain cannot be called dead.

A person has to fail a lot of tests to be considered brain-dead. And more than one doctor has to confirm brain death. Only after countless tests and an in-depth physical exam will you ever go from “Coma patient” to “brain-dead” patient. Nowadays, it’s not just some dude with a needle poised over your heart and “I am really dead” scrawled on a scrap of paper.

It is highly unlikely that your living brain will slip through the cracks and that you’ll be sent away from the hospital in a coma. Even if you were, there is no funeral director or medical examiner I know who can’t tell the difference between a living person and a corpse. Having seen thousands of dead bodies in my career, let me tell you⁠—dead people are very dead in a very predictable way. Not that my words sound all that comforting. Or scientific. But I feel confident saying that this is not going to happen to you. On your list of “Freaky Ways to Die” you can move “Buried alive⁠—coma” down to just below “terrible gopher accident.” 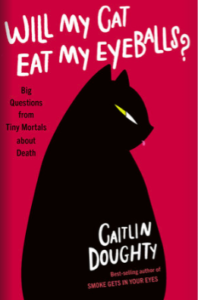 Mortician Caitlin Doughty—host and creator of Ask a Mortician and the New York Times best-selling author of Smoke Gets in Your Eyes—founded The Order of the Good Death. She lives in Los Angeles, where she runs her nonprofit funeral home, Undertaking LA. 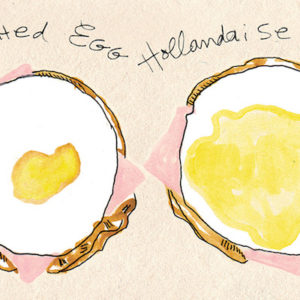 If getting to the bottom of Eggs Benedict weren’t already difficult enough—there are invention stories from several Benedicts,...
© LitHub
Back to top
Loading Comments...