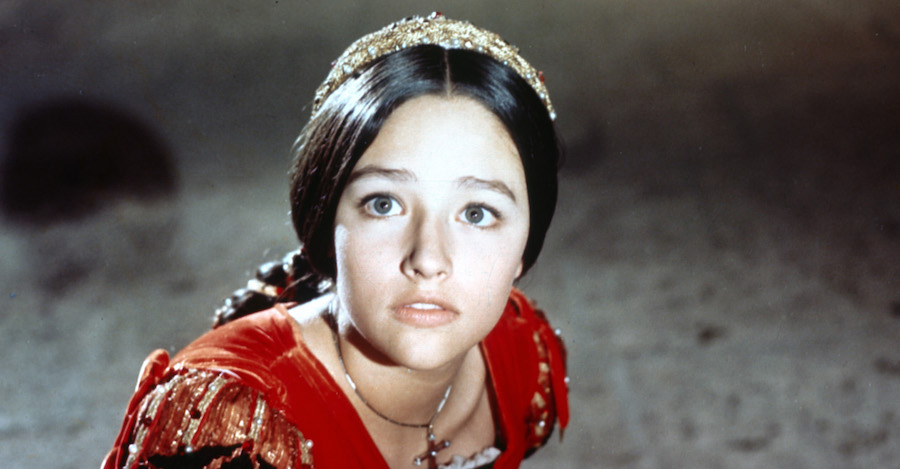 If Shakespeare’s Juliet Was an Advice Columnist, What Would You Ask Her?

Via Chronicle Books
By The Juliet Club

Every year, more than 10,000 handwritten letters addressed to Juliet are sent to Verona, Italy, where Romeo and Juliet is set. The Juliet Club is a nonprofit cultural organization started by Giulio Tamassia and currently managed by his daughter, Giovanna. Giovanna and her fellow Juliet’s Secretaries collect and respond to every letter addressed to the Bard’s famed heroine. Dear Juliet collects 60 of these letters. Four are included below.

When I met Ricardo, I had no doubt that I had found the man of my life. When we met, I was 16 and he was 28; we met at a diplomat party. He was a cadet and I was the godmother of my friend’s baby. From the moment we were introduced, we were together . . . Unfortunately, our relationship could not continue; he was about to finish leave, and as soon as he finished, he would return to his hometown, Espírito Santo.

From that moment on, our relationship was through letters, and those letters were my only relief, but I did not find it right to maintain a long-distance relationship. I was too young, and my father would never have allowed me to go to him. And so, we broke up. Even if it was so sad to do it, we decided that life, if it wanted to, would reunite us once again.

Time passed. I became engaged to another man, but I was not happy, and decided to stay alone. Ricardo got married and then divorced. Twenty-five years later, our paths crossed again! He was an army doctor and came to my city to get some documents; he stayed for three months before leaving on a mission to Africa . . . It was a dream come true! When we met again, it seemed like time had stopped, because we still had all of the good feelings like when we first met—actually, stronger! And he asked me to marry him! He told me that life in Africa would not be so easy, but I was determined to stay with him. I did not want to let him go away again. So I started getting ready: I left my job, I left the university, I sold my apartment, I got the documents to go to Africa and for our wedding. 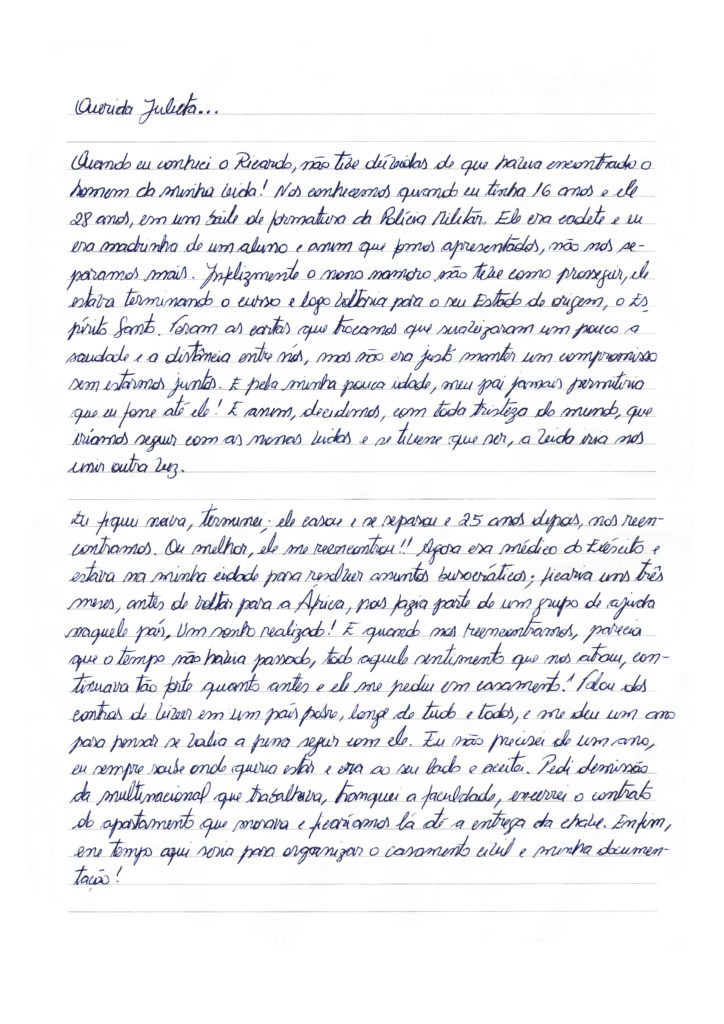 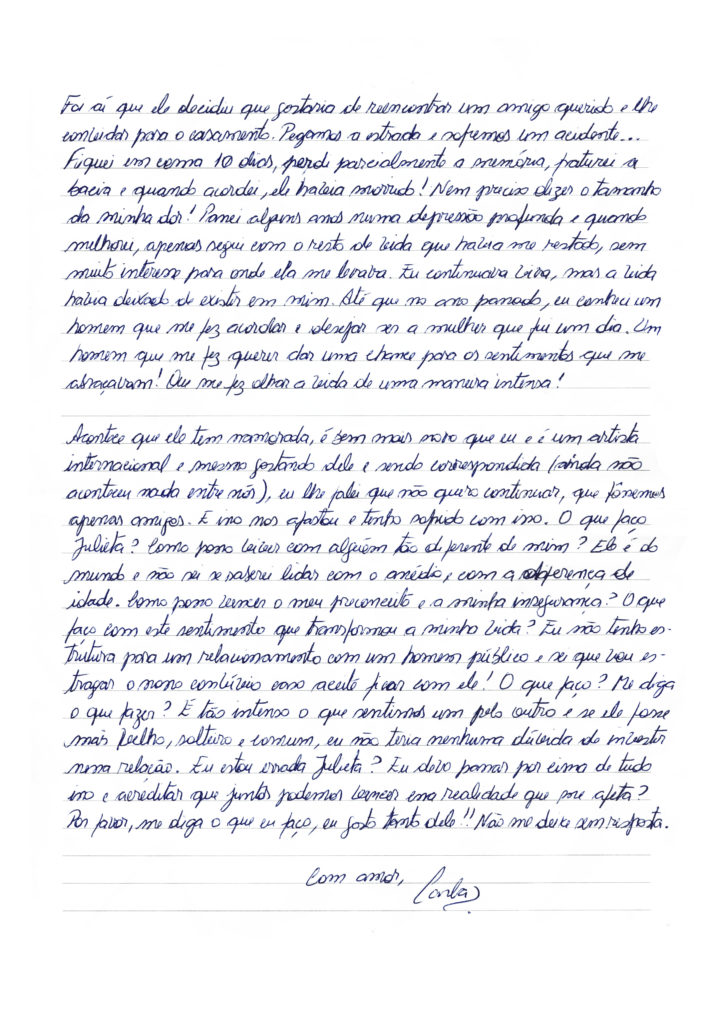 Ricardo wanted to give the wedding invitation to a dear friend of his. While we were traveling to see the friend, we had an accident . . . I was in a coma for ten days, I partially lost my memory, and when I woke up he was gone. He was dead! Needless to say, I was devastated, an endless pain! I spent years in depression, and when I managed to get better, I lived without expectation. I was still alive, but life no longer existed inside me . . . Until last year, I met a boy who woke me, made me feel alive like the woman I was long ago. A man who gave my feelings a new chance, made me see life in a different way.

But he has a girlfriend. He’s younger than me and an international artist. Even though I love him and I know that he reciprocates my feelings (nothing has happened between us), I told him that we must only be friends . . . and maybe this has turned us away from each other, and I suffer from this situation! What should I do, Juliet? How can I share my life with someone so different from me? What can I do to be sure? What should I do with this feeling that has changed my life? I’m not able to relate to a famous man. What should I do? If he was older, single, and a “normal” person, I would have no doubts . . . Am I wrong, Juliet? Do I have to overcome this and believe that we can live together? Please tell me what to do, I like him so much! Do not leave me without an answer!

I am a 23-year-old Japanese student. I have heard that it’s possible to write you for advice about love, so here I am.

I had a boyfriend for only three months about four years ago. He still thinks of me.

We separated because I felt nothing for him. Afterward, I met other people. I tried to be strong. I made wrong choices that I now regret.

I didn’t feel interested probably because my expectations were too high, and now I am worried because I don’t know how to behave. 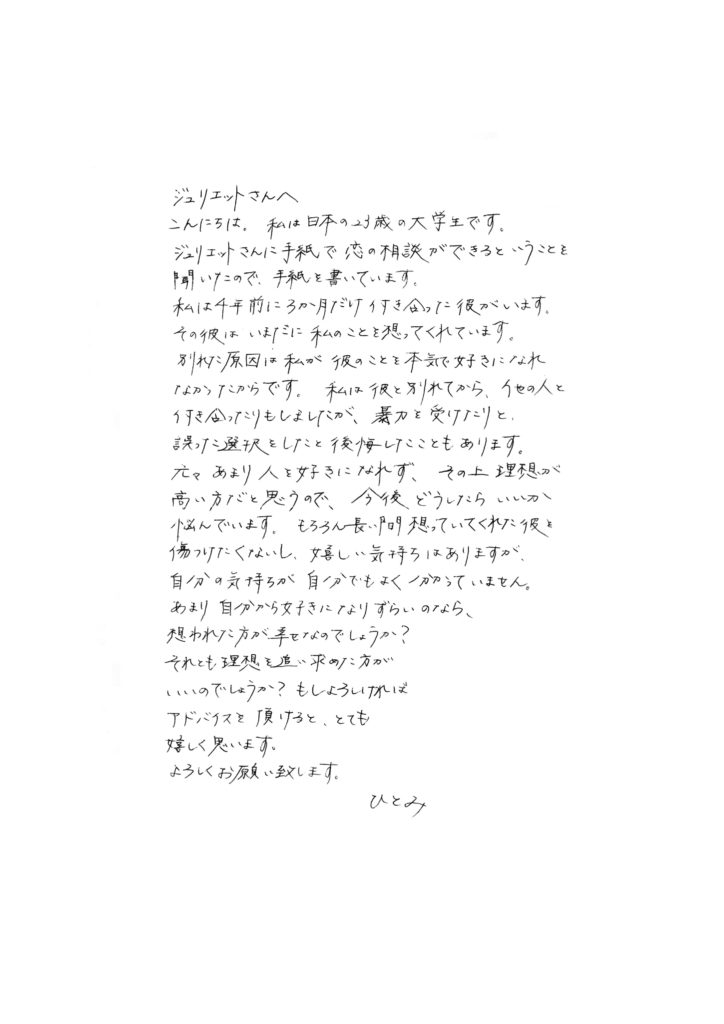 Of course, I don’t want to hurt him, since he has been thinking about me for so long. In a certain way, I feel happy, but I cannot understand my emotions.

If I don’t feel something rising from my heart, can the person who is thinking of me be happy?

Was it good to keep my ideals?

I’ll be glad to receive your advice.

My name is Maria, and I live in your beautiful town. When I was a 20-year-old girl I had the chance to read your love story in a magazine, and I also saw the pictures of your house and grave in Verona. Since then, I dreamed of visiting these places.

Good fortune and fate gave me the chance to come and live in your—and now also my—fair Verona.

I used to live in a small village in the mountains of the Marche region, Amandola, and even though more than 50 years have passed, this place is still in my heart.

My parents, my sister, and I managed our own bakery. In the summer of 1962, the town welcomed sailors who were boarded on ships all year long, to give them some rest.

It was natural that many sailors visited shops like our own, especially one that was managed by girls. 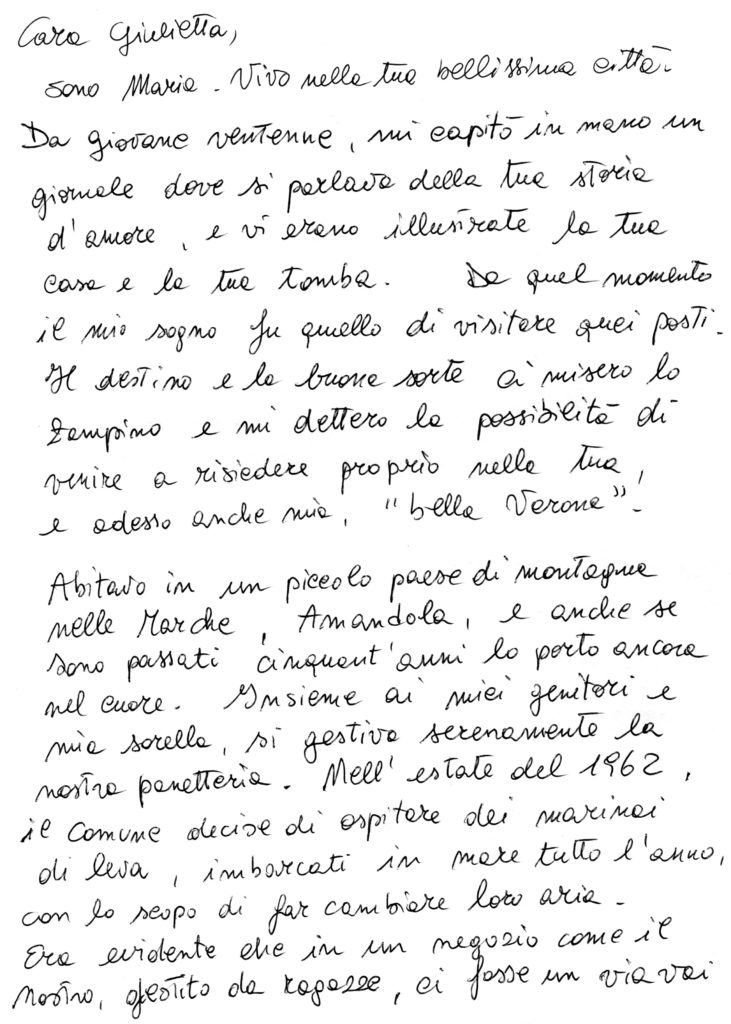 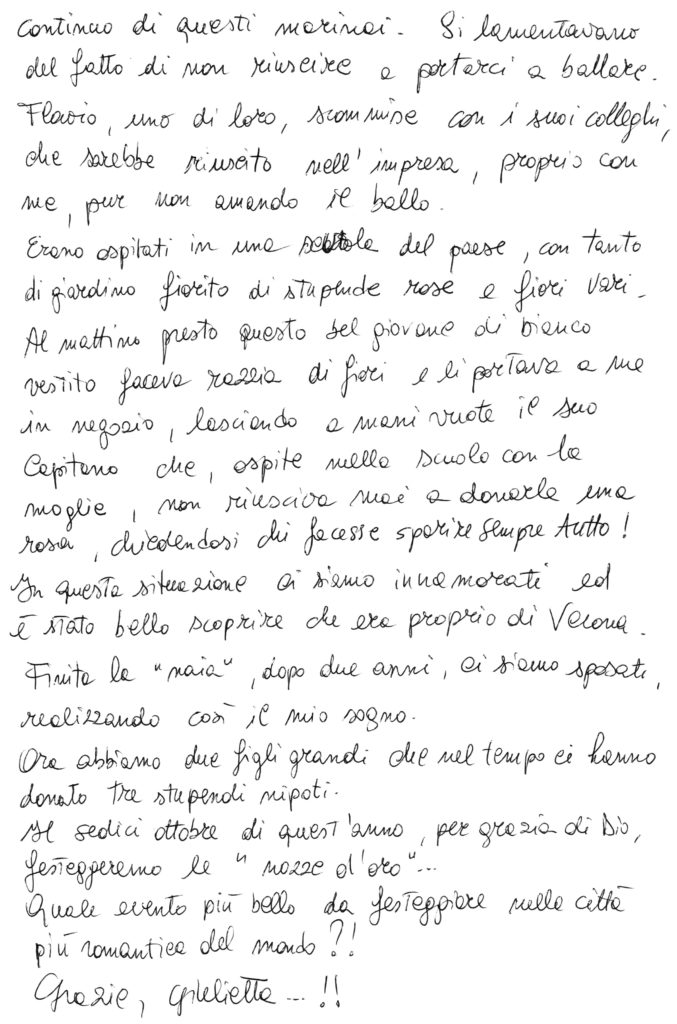 They complained that they could not take us to a ball.

Flavio was one of them. He bet his friend that he would take me to the dance, even though he was not a dancer.

The dances were hosted in a school in the village, with a garden full of flowers and roses.

Early that morning, this handsome man stole some flowers and brought them to me, leaving his captain without any roses for his wife! The captain asked who stole every single rose!

We fell in love with each other, and I learned that he lived in Verona. When he finished his service in the army, we got married and my dream came true. I moved to Verona, and now we have two sons, as well as grandsons.

We have just celebrated our “Golden Anniversary” (50 years). Thank you, Juliet!

It sounds strange to write to a fictional character, but I think that you represent the love goddess.

It is difficult to write what I am feeling because this makes my feelings alive and real.

I am French. I lived with a man here, but I adore Greece: its myths, its culture. I visited Athens for the first time last September, 2016.

A Greek friend helped me discover the city. He took care of me (I have an illness). He gave me some presents—simple ones, like an apple, but they filled my heart with joy. 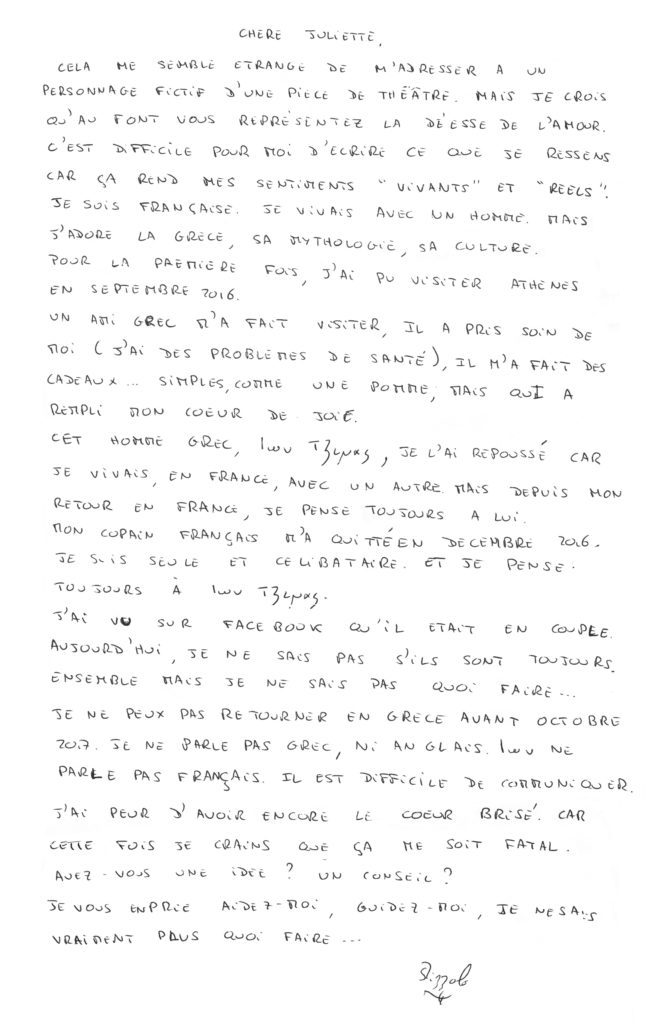 I then rejected this man, since I lived with someone else. But after I came back to France, I would think of him.

Now I am single, and he is always on my mind. I saw on Facebook that he is now with someone. I do not know if they are still together, but I don’t know what to do.

I will not go to Greece again until next year. I don’t speak Greek or English. He doesn’t speak French. It is difficult to communicate.

I fear to have my heart broken because I know that this time it would be fatal.

Have you any ideas? A piece of advice?

Help me, please, guide me, because I have no idea. 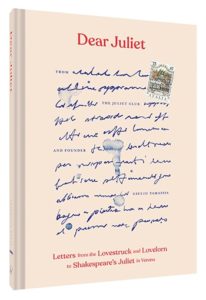 Reprinted from Dear Juliet by Giulio Tamassia and The Juliet Club with permission by Chronicle Books, 2019

The Juliet Club is a nonprofit cultural organization started by Giulio Tamassia, now managed by his daughter Giovanna. Together, she and her fellow Juliet's Secretaries collect and respond to every letter addressed to Juliet. They are located in Verona, Italy. 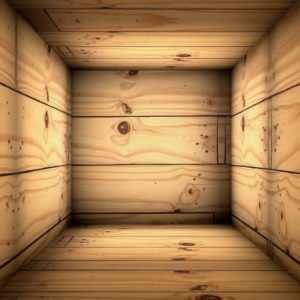 What Are the Actual Chances of Being Buried Alive? What if they make a mistake and bury me when I'm just in a coma? Okay, so to be clear, you don't want to be buried alive,...
© LitHub
Back to top
Loading Comments...