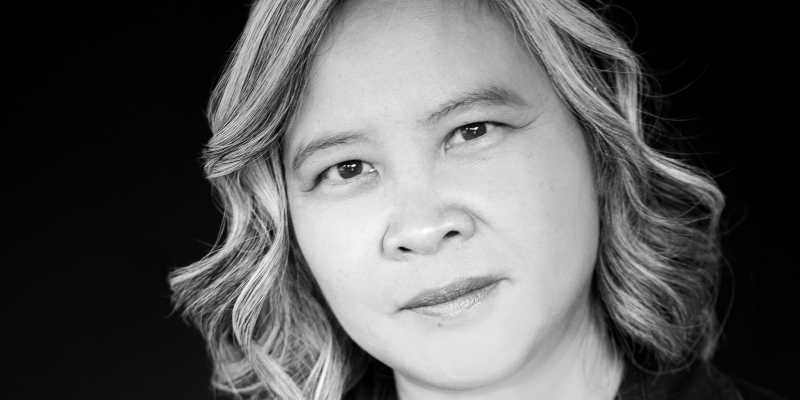 Author and journalist Putsata Reang joins co-hosts V.V. Ganeshananthan and Whitney Terrell to discuss the dangers faced by foreign correspondents and local journalists during times of violent crisis. Reang talks about the dangers reporters are facing in Ukraine, recalls training journalists in Afghanistan, and reads from her forthcoming book Ma and Me: A Memoir. She also reflects on how her experiences in journalism connect to her history as a Cambodian refugee and her identity as a gay woman.

Ma and Me: A Memoir • Opinion | My Family Fled Cambodia as the Americans Evacuated. Here’s What I Hope for Afghan Refugees., POLITICO • At Sea, and Seeking a Safe Harbor, The New York Times • Full Circle: Two journalists return to their native countries to help other journalists express dissent, Oregon Humanities (with Kim Oanh Nguyen)

When the War is Over: Cambodia and the Khmer Rouge Revolution by Elizabeth Becker • “Iraq War and News Media: A Look Inside the Death Toll” by Frank Smyth, Committee to Protect Journalists, March 18, 2013 • “‘The Iraq War: The Heaviest Death Toll for the Media’” Since World War II, March 2003 – August 2010 by Reporters Without Borders’ Middle East Desk, September 7, 2010 – Updated on January 20, 2016 • “Ukrainian Family’s Dash for Safety Ends in Death” by Lynsey Addario and Andrew E. Kramer, The New York Times, March 7, 2022 • “American veterans train Ukrainian volunteers in combat,” CNN • Excerpt of interview with NYT’s Lynsey Addario by Norah O’Donnell of CBS Evening News (via Twitter)

Whitney Terrell: I’ve noticed that it seems like many of the people in the most danger are photographers and videographers, which is connected to that idea that Putin especially doesn’t want images of this shown to the broader public. And to the Russian population, of course, which is why he shut down all the media in Russia. Do you think changes in how the news is read and disseminated have also changed who is in danger in a war zone like this?

Putsata Reang: I think it’s so much easier for writers to hide than for photographers and videographers; they’re carrying their gear with them. And so immediately that makes them a target. I also can’t help but think of the photographs that Lynsey Addario of The New York Times did. This iconic image of a mother and her two young children, a girl and a boy who were killed in a bomb blast in a suburb just outside of Kyiv. When I think about all of the days of news that I’ve consumed, whether it’s via TV news or radio or newspaper or blogs, what is the thing that stays with me? It’s images. And I think that that’s true for a lot of people. Images stay with us long after we have seen them, as opposed to, say, a long, thin piece in The New Yorker or in The New York Times. That’s not to say that writing no longer has a place and that, you know, only images are telling the story. That’s not the case at all.

But I do think that because of where we are in our society right now, and how we consume news, and how fast news is made via social media, whether that’s TikTok or Instagram or other kinds of social media, that our attention span as a species, you know, as a society, has really declined. And so, in that sense, it absolutely is harder, I think, and more dangerous for photographers and videographers in the scenario of operating in a conflict zone. Because for somebody like me, as a writer, as a journalist, though I would want to be there at the scene, as opposed to doing armchair journalism, I don’t necessarily have to be. I can report from afar, which is what a lot of foreign-based journalists in Russia are now doing out of Istanbul, just to get out of the fray and to get out of Moscow. And so, they’re doing the best they can to report on the news from a distance while keeping themselves safe. And so, you know, for those of us who operate with words, as opposed to pictures, there’s a little bit more safety, I think, in that.

V.V. Ganeshananthan: Interesting, because the old-school stereotype of the swashbuckling, white man war correspondent facing danger with this notebook in his hand… This is really kind of the opposite. You were both mentioning before, alluding to your friends who are local journalists in Afghanistan and Iraq, and their increased level of danger there, which is also something that I’ve observed in Sri Lanka. And I was reading that when Pierre Zakrzewski worked in Afghanistan, he worked to help freelancers and their families leave the country after the U.S. troop withdrawal and Putsata, I know you have a lot of opinions on the U.S. troop withdrawal, and you’d mentioned to me that you’re working to help someone still in danger there yourself. Can you talk a little bit about how the risks for local journalists differ in these conflict situations?

PR: Absolutely. The risks are different in the sense that they’re just magnified, so much more so for local journalists than say, for somebody like me, as a foreign journalist being in other countries. I have a US passport, and the privilege of that is so high, it’s as if this passport is a key that unlocked my ability to move around the world as I wish. It’s not to say that Americans are welcome in every country or that there’s no danger for travel, but certainly, I can leave these situations in these countries, whereas local journalists cannot.

One of the things that I’ll never forget, when the Taliban took over Afghanistan once more, in August of last year, was that one of the journalists who I worked with and trained in 2008 in Kabul, sent me a photograph of our class on the last day of class. And he sent in his email a very quick note that said, “Teacher, do you remember me?” And it really caught me because, you know, 40 years prior to this moment, when my family was in Corvallis, Oregon, building new lives after fleeing the genocide in our country, my father received a letter in the mail after the Khmer Rouge were ousted by the enemy’s army. And it was a letter by his half-brother that started with the line “Brother, do you remember me?” And so, in a lot of ways, my father’s feeling of obligation to help family members come to America has now, 40 years later, or 45 years later, been echoed in my own feeling of obligation to help others who are in a similar situation.

And the journalist in particular, who I am trying to help, has been able to get support from family and friends to be able to, at least, send him a little bit of money to buy food and basics for now. This guy has a double target on his back because he is both Panjshiri and a journalist, and the Panjshir Valley, of course, is the area of Afghanistan that has been the most, I would say, combative toward the Taliban, and extremely resistant to the Taliban. And this has historically been the case there, and so, you know, immediately when the Taliban took over, Panjshiri people, anybody who was Panjshiri like this journalist, were absolutely terrified and continue to be. This journalist I’m helping continues to be in hiding and it creates a real dilemma and conundrum for those of us who are foreigners and have gone to countries to report or to help journalists report on their own stories. Because at the end of the day, we can catch that last flight out of a country, whereas local journalists cannot. This is their country; they have to stay. And that was also true in Kyiv, and it has been true in Cambodia when I worked there. 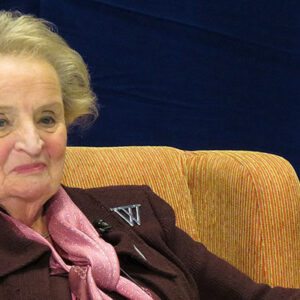 With Madeleine Albright's passing, we thought it might be useful and interesting to revisit our conversation with the American...
© LitHub
Back to top