Philip Pullman is uneasy about his work being characterized as “for children.” He balances the clarity of narrative demanded by younger readers with the intellectual complexity appreciated by older ones. When asked about his ideal audience, he describes “a mixed one”. It makes sense: explicitly labeling something as being for children or teens often makes consuming it unacceptable for adults, or at least heavily stigmatized—in part because of the sense that somewhere inside the rip-roaring adventure, romance plot, or mystery we’re being spoonfed our medicine and told how to live. Often, that’s true. (Though many older fairy tales, glimpses of oblique horror handed down over centuries of oral tradition, offer a useful counter-example.)

But almost all ethical thinking happens in the context of stories, from religious parables to the frequently-mocked trolley problem to viral tweets that lay out a series of complicated temptations ending with “wyd.” When you engage with this kind of story, you’re supposed to learn some sort of lesson, or at least understand a bit better how to live in the world. Isn’t that something adults should care about, too?

Ladies u just had the time of ur life n decide to take things back to his place. He opens the door n says “ur palace awaits” n u c this. Wyd pic.twitter.com/3GUJxZQcsQ

Pullman makes no secret of writing with such takeaways in mind—especially in his most well-known work His Dark Materials, a trilogy of books that is sort of for children and definitely about killing God. If you need a refresher: 12-year-old Lyra Belacqua embarks on a quest to save her friend Roger from mysterious child kidnappers, with the help of her daemon (an animal embodiment of her soul), a Texan balloonist, a Roma tribe, an alethiometer (a magical compass that can answer any question if you’re an astute enough reader), and an enormous, armored bear. She finds herself caught in a war between the repressive, anti-intellectual and ascetic forces of the Magisterium (her world’s version of the Catholic Church) and largely good-intentioned, if violent and unscrupulous humanists, represented respectively by her parents: Mrs. Coulter and Lord Asriel. Along the way, she meets Will Parry, a boy from a world very similar to our own, and together they use a magical knife to both accidentally dissolve the angel pretending to be God and end the prison that is every world’s afterlife. It’s heavy stuff.

The Book of Dust, a “companion trilogy” to His Dark Materials, is equally serious, though far smaller in scope. When La Belle Sauvage, the first volume, begins, Lyra has only just been born. Here, Pullman follows her childhood protector: a sturdy, thoughtful, refreshingly competent boy named Malcolm Polstead. Unlike Lyra, Malcolm has no grand destiny—or at least, not one ostentatious enough to catch the ear of the world’s witches and philosophers. But through a process of careful observation, asking the right questions, and being quick and decisive, Malcolm wends his way into the ongoing conflict between dual secret service agencies, one supporting Lord Asriel, the other an arm of the Magisterium.

Though there is clearly a right and wrong side in the secret war, Pullman doesn’t allow La Belle Sauvage to become a simple good-vs-evil story. Malcolm befriends several of the nuns who live near his home, even though they are agents of the church. (In children’s books, nuns are either kindly maternal figures or stern agents of pain—here they are both.) Lord Asriel wants to protect his daughter, but he’s also a manipulative bastard with no qualms about letting people die to advance his cause. Even the book’s primary villain Gerard Bonneville, a seemingly unstoppable, sociopathic disgraced scientist who reads like a more masochistic version of Anton Chigurh, has enough of a backstory for readers to understand why and how he snapped.

For most of the second half of La Belle Sauvage, Malcolm and his friend Alice navigate a supernatural flood, which becomes an explicit fantasy proving ground for their coming of age stories. Without any recourse to communication technology, there’s no way for them to call for help. Instead, the current brings the pair to one deadly encounter after another, like a sort of Odyssey for kids who really should be in middle school. Among other obstacles, the pair meet a fairy who wants to take Lyra for her own, a drunk with delusions of grandeur and a sloppily-wielded shotgun, a secret community of foragers, and an island of forgetful spirits. They take each in stride, committing to the baby’s safety above all else, talking out difficult choices, and calmly sacrificing their own dignity, and physical well-being to carry them out.

“Pullman’s work is at its best when it acknowledges the disjunction between moral strength and the often dire circumstances in which his characters are called upon to employ it.”

Watching characters be written into a corner is one of fiction’s great pleasures and, in Pullman’s hands, one of its most effective tools. Engaging with ethics through fiction doesn’t have to be as simple as asking what you would do in the character’s situation, though that can be a part of it. Instead, simply getting a sense for what it would be like to be in someone else’s difficult position—without an easy answer—can go a long way toward eroding the grip of abstracted ethical thinking.

In this respect, Pullman’s moral commitments are embodied in his fiction: “It is good for people to know things, to grow up, to become sexual beings,” he once said. To know things, to grow up, to become entangled in the emotional and physical obligations of a sexual relationship, is, by its very nature, complex. To grow up is to be able to see the world as a knotty weave of particulars, rather than a set of potential applications for simple moral lessons. These are the all-caps, unchanging rules that end the sort of fables that give children’s literature a bad name: always tell the truth, don’t judge a book by its cover, respect your elders. They’re useful guides, but part of developing a moral imagination is knowing how and when to disregard them.

Being a living American person in 2017 is also complex. Faced with an obvious crisis, many of the nation’s critics have retreated to a form of simple moral alarmism, in which we “need” certain types of art, “now more than ever.” Usually, this art entails the bare act of attempting to depict the presence of human kindness, or bringing up the fact that politics can be bad. The solution is never that simple, of course—the mere existence of a heroic role model accomplishes nothing, unless a reader is compelled to want to engage with the character, to think as they do. That’s a task that requires teaching people not just to read the right things but to read well: to pick up on the small details that change our understanding of others and of ourselves.

Some of the strongest moments of La Belle Sauvage are simple scenes of Malcolm visiting his academic mentor and spy contact, simply to talk about books. The excitement in Malcolm’s mind as he begins to encounter new, adult ways of living is palpable, and extends to a wide variety of literary habits. For example: You can read trashy mystery novels, wait a few years, and have completely forgot whodunnit. To be exposed to this way of thinking, to a new set of utensils you can use to devour a book, is to become a better reader, which allows Malcolm to more effectively live in and understand his own choices. Indeed, Pullman’s work is often about the benefits of reading—being able to understand the alethiometer is itself a form of close reading and attention to symbolism, knowing how to precisely craft your question or understand an answer from a dizzying array of possible meanings. Reading the alethiometer, like getting a grasp on language itself, is an extraordinarily difficult but deeply worthwhile skill.

The end of the fairy tale, exemplified by “and they all lived happily ever after” or its grim equivalent, puts a button on the moral by suggesting that the world will reward you for good behavior or punish you for doing evil. There’s the boy who helps an old woman and becomes a prince, the clever girl who tricks the king into marrying her, or the woodcutter whose honesty earns him riches beyond his wildest dreams. None of this happens in the real world, where the connection between goodness and success is tenuous at best.

Pullman’s work is, in turn, at its best when it acknowledges the disjunction between moral strength and the often dire circumstances in which his characters are called upon to employ it. Malcolm Polstead is sans destiny and has no inherent connection to Lyra, yet he survives a biblical flood and the pursuit of a madman with the aid of just his canoe, his wits, and his friend. He puts other people in danger, breaks his world’s taboo against touching another person’s daemon, and ultimately commits murder—an act that he and Alice only partly justify while continuing with a certain background level of unease. We can only hope to approach our challenges the way Malcolm does: he does his best and acts well. 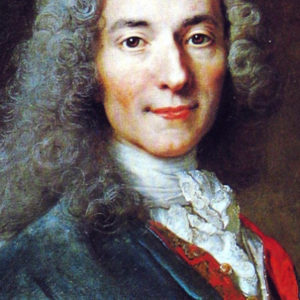 “No babies, no future. No human race. Men find ways to engulf women and to manipulate the female body. We keep...
© LitHub
Back to top